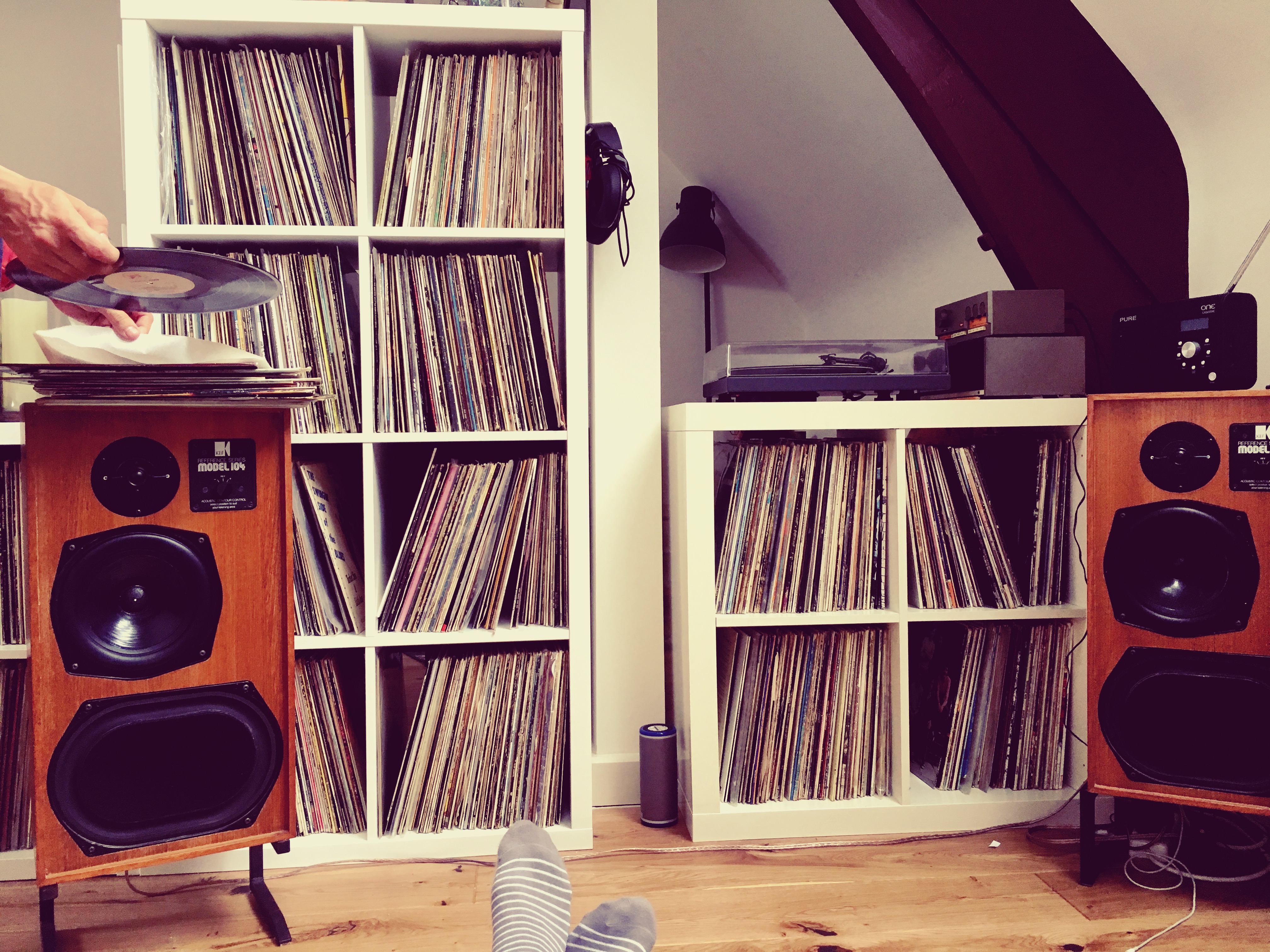 The seed was planted over a year ago, at my brother-in-law’s house, when we sat down to listen to some records. For the first time I can remember, I was blown away by how good vinyl can sound. The seed was then watered by That Classical Podcast. Or, more accurately, this tweet from one of the hosts:

Bloody hell @snow_poet this is a DELIGHT!! Such a beautiful album from start to finish https://t.co/u0IA9cKaes

Snowpoet’s Thought You Knew is a stunning, beautiful, delicate album. Since first hearing it in June it quickly raced up my ‘most played’ chart and has been on my mind all of the time. The band are relatively unknown. I wanted to give something back and support them, but had long since retired my CD player in favour of mp3s and Spotify. I ended up buying a vinyl copy for my brother-in-law but it didn’t completely scratch the itch that I had. I wanted to hold this album in my own hands.

When I’ve heard vinyl over the past few years, I’ve generally not been impressed. To my ears it didn’t sound better than a CD or even a good streaming service. That evening with my brother-in-law changed my perception completely. He’s been a vinyl collector for many years and has a lovely set of refurbished 1970s hi-fi separates to play his records on. The sound quality melted the wax in my ears. Somehow this experience paired up with hearing Thought You Knew and I started to think about investing in a decent turntable myself.

After a lot of research I settled on getting a Rega. The reviews for their turntables are overwhelmingly positive wherever you look. The only question was which one of their range to save up for and buy. Although we have a ‘proper’ (cheap) amp and speaker setup in our lounge there isn’t any room to place a turntable nearby, so I had decided that it would sit near to our trusty old Sonos ZonePlayer S5, feeding its signal to the ‘line in’ connection. This would have the added bonus of being able to send the audio to any of the other Sonos units in the house.

As much as I love my Sonos, I was sure that it would quickly become the limiting factor for audio quality — spending more money on a turntable beyond a certain quality level would be pointless — so I sought professional advice from my local hi-fi shop, Deco Audio in Aylesbury.

Located on a generic-looking industrial estate, Deco Audio is a shop where you need to ring the doorbell and wait for someone to come and let you in. When you step through the doors you see why — the shop is filled with beautiful equipment of all shapes and sizes.

I explained that I was looking to buy a Rega, but wasn’t sure whether to go for a Planar 1, a Planar 2, either of these first two with their respective ‘performance pack’1, a Planar 1 plus with an integrated phono stage, or a Planar 3. Too many choices. They made me a coffee, and were only too happy to spend time with me discussing my options. Given that it would be going through the Sonos, they tried to talk me down to the cheapest of the three models. In the end after a bit of debate I plumped for a Planar 2 because (a) the parts can be independently serviced and upgraded over time, (b) it was in stock and (c) I wanted that beautiful glass platter as opposed to the plastic one that comes with the Planar 1. I had to pick up a phono stage as well and went for the simple Rega Fono Mini A2D. Plus some cables, and a carbon fibre record brush to clean the LPs before they get played.

Deco Audio also have a record shop in-house with a great selection of vinyl, all of which has been put through their in-house Moth record cleaner. I spent some time flicking through the racks but was already feeling poor from my impending purchase so I didn’t pick anything up.

It was very exciting to get it home and put it together. Setup was extremely simple — the most difficult part was balancing the tone arm accurately with the counterweight, but watching someone else do it on YouTube first helped.

I had a few records in the house that my parents had passed to me and wasted no time in testing one out. The sound was instantly stunning. A friend paid a visit the next day and was stunned also. Both of us, stunned. It’s hard to put my finger on exactly why it sounds so great. I know that in part it is confirmation bias — I really wanted it to be a great experience and I am sure my brain is willing my ears to accept that it is — but that’s not all of it. There’s something different about it sonically, even though it is being output to a speaker that lives firmly in the digital realm. Maybe I’m just listening with more care and purpose again after so many years. By definition, older records will be completely analogue from recording to mixing to mastering (known as ‘AAA’); there is no sampling to create a digital signal and they therefore contain much more information. Whether that makes a difference is up for debate. To me, owning the records, holding them in my hands, caring for them, looking at the artwork, sitting around and purposefully listening is filled with pleasure. Anyway, every man needs a hobby.

There are a couple of things I’ve had to do on the Sonos to make it work well. Firstly, I’ve had to move buffering to maximum. I found that with a low setting I kept getting dropouts when I sent the sound to other speakers in the house. A side effect of this is that there is a substantial delay from what happens on the turntable and what comes out of the speakers. It’s really weird to lift the needle from a record to have the music stop a couple of seconds later. More substantially, if you sit close to the turntable you can hear the unamplified music coming off of the cartridge, and this can be a little distracting from the music from the speakers given that they are behind, particularly when playing something that goes from quiet to loud. Closing the lid on the turntable helps to muffle this noise.

Secondly, I adjusted the level of the line in connection. The Sonos app lets you pick an appropriate level, which has the effect of increasing the ‘default’ volume for the component. I found that setting this quite high as described here gave a better sound without any distortion.

From here on in over the past few weeks it’s been a fun journey, learning the ropes of finding and buying records to play. Discogs is an invaluable resource. Where a particular album has been issued and reissued over the years you can read feedback from people who have heard those particular pressings, add the ones you want to buy to your wantlist and browse and buy copies for sale. There is a wealth of historical pricing information so you can judge whether you are being asked to pay over the odds or getting a bargain. From what I can judge, records are extraordinarily expensive if they are (of course) popular and either (a) extremely rare, (b) original first pressings of something that became really popular or (c) released in the late 1990s/early 2000s when presumably vinyl production and consumption was at its lowest, in effect leading to (a) again. To use Discogs you need to learn the grading nomenclature. Typically ‘Mint’ or ‘Near Mint’ (M/NM) cost top-dollar whereas ‘Very Good Plus’ (VG+) is closer to the median. I’ve now bought a few records via Discogs and have only felt let down by one purchase, but even then the seller refunded me straightaway and even paid my return postage. There’s something magical about coming home to find a well-wrapped package containing a new LP.

I’ve also been buying a few things from Amazon (good, new reissues mainly). They use a lot of packaging but you know what you’re getting and returning any damaged goods would be straightforward. There’s also The Sound of Vinyl which has an excellent clearance page where I managed to pick up a couple of new John Martyn reissues for around £9 each. The Super Deluxe Edition website is worth subscribing to for news of reissues, and regular updates on price drops on the various worldwide Amazon sites. Scott Nangle Audio has some very special releases, such as LPs mastered with a ‘one step’ process at 45 RPM — Bridge Over Troubled Water for £169, anyone? I can’t see me ever going there, even for albums I adore. There are cheaper pressings of lovely records too. Bandcamp is also a good outlet for new vinyl; as far as I can make out they broker the orders and pass them on to the artists/distributors. I ordered something from Bandcamp and Edition Records inadvertantly introduced me to Slowly Rolling Camera by sending me their Juniper album by mistake; they let me keep it, and it was a lovely way to make a great new discovery.

I was fortunate to stumble across the London Jazz Collector blog as I was looking to buy a copy of Waltz For Debby2. His site contains a ton of information on buying records that is worth devouring, including buying online, how to examine vinyl, grading records, how to store your vinyl and record cleaning. There is a wealth of wisdom here.

I also recommend the Vinyl Junkies podcast, particularly their ‘101’ series with episodes on originals vs reissues and ‘the art of crate-digging’.

The question now is what albums to own on vinyl. I’ve been buying much-loved records from my past with a plan to play them at a future Album Club night, as well as a couple of recent discoveries I have made via Spotify. The Guardian ran an article recently that asked whether a decade of Spotify has ruined music. As the author says:

Look: I pay my £9.99 a month. I use Spotify to make playlists for friends’ weddings and to compile 80s curios I discover on TOTP reruns. The genie isn’t going back in the bottle. But we can be responsible listeners (I buy albums I listen to more than five times) and hold Spotify to account because the people it is meant to benefit can’t.

Which brings me back around to that wonderful Snowpoet album. If you have the means, the rule of ‘listened to more than five times so then buy it on vinyl’ seems like a good one to me. It’s a great feeling to support an artist that you love through buying the thing that they have made, and this album is so great that I’m happy I’ve been able to buy a copy for me and a copy for a friend. I know I have many hours of enjoyment ahead. 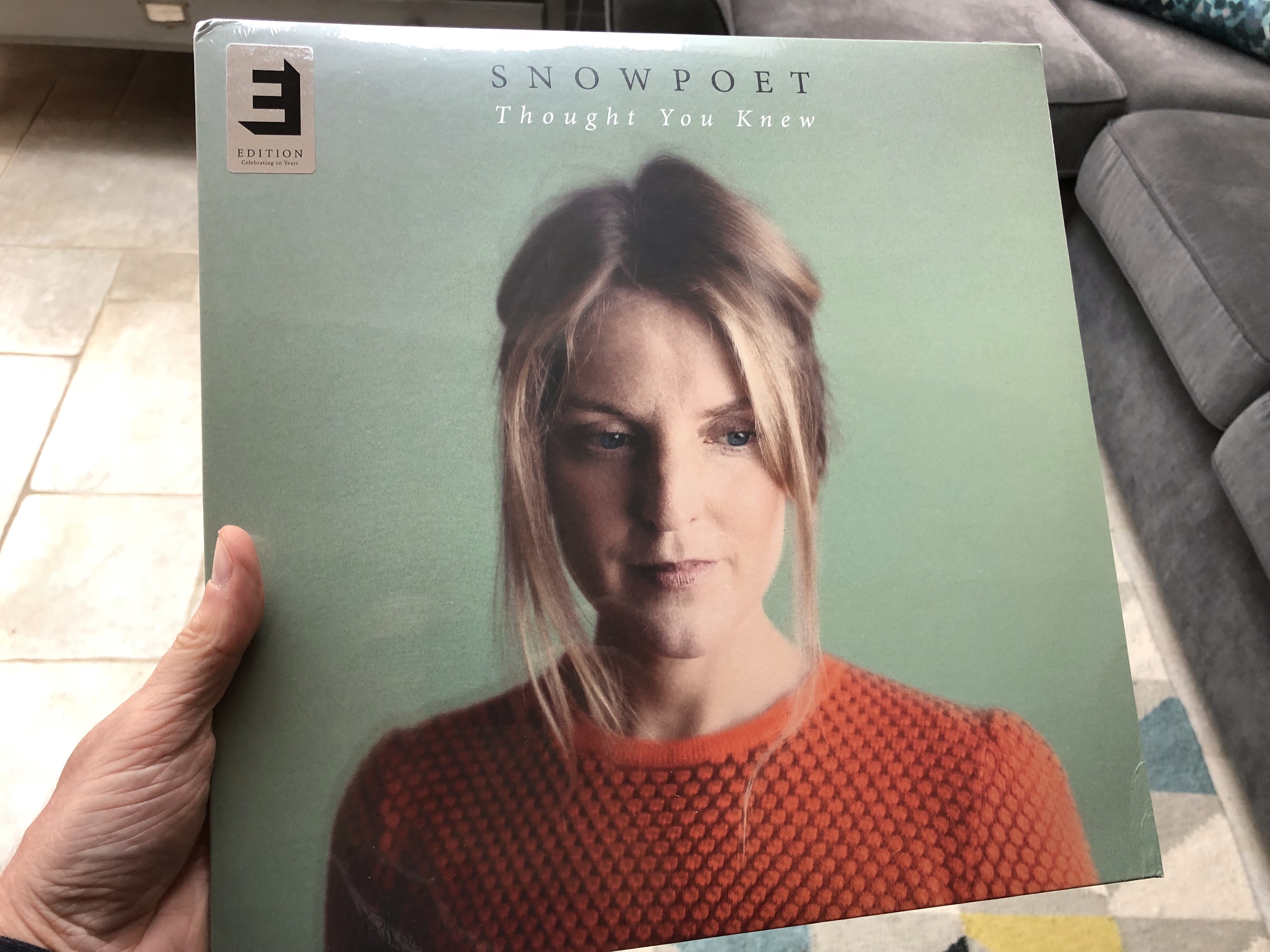