Devastated after watching Lion. Wrenched me into a completely different sense of perspective. 80,000 children go missing in India every year. 80,000.
Turner and Hooch (1989) isn’t quite as good as I remember. Hanks is great though, sudden shouty voice employed to great effect.
After watching and falling in love with Spirited Away a couple of months ago we invested in a copy of My Neighbour Totoro and watched it last night. It’s nowhere near as epic but still lots of fun, inventive, very endearing and we were sad when it finished. 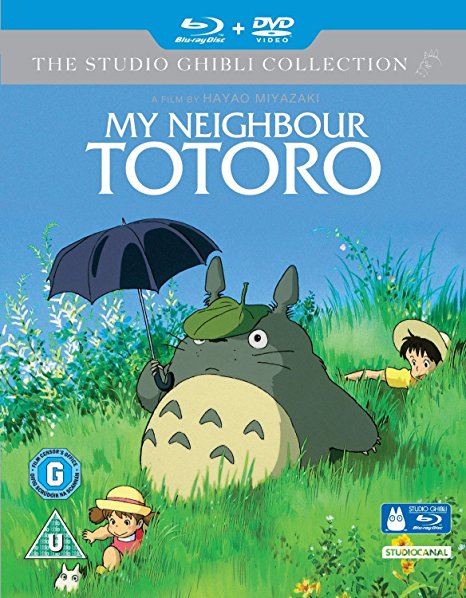 Watched Spirited Away with the family last night. I now understand what all the fuss is about. Absolutely beautiful, weird and wonderful film. We all loved it.
Just watched ‘To Sir, With Love’ (1967). Amazing to see it though modern eyes — I spent half the film thinking about how many safeguarding issues it was accumulating as we went along. A chunk of casual racism that I am sure fit with the times but is astonishing now, gigantic milking of the title song throughout and an obvious plot that didn’t go very far. But strangely compelling. Having The Mindbenders play the finale was fun. 6/10. 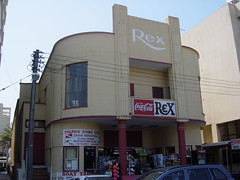 Saw this building while on holiday in September and it made me chuckle – thousands of miles apart from our Rex in Berko but I am sure many happy nights have been spent watching movies here too.
We went to see the Sunday matinee of The Seven Samurai at The Rex last weekend. I’ve wanted to see the film for ages and it was great that a chance came up at our lovely cinema. I wasn’t disappointed – for a Japanese film made in the 1950s it was surprisingly accessible and I could see exactly why it was remade as a western.

I couldn’t help feeling that I had seen the actor playing the main samurai somewhere before. Towards the end of the film it hit me – he was the spitting image of Morgan Freeman. A little digging turfed up this picture of Takashi Shimura – take a look for yourself to see what I mean. I think it was that he was doing so much of the ‘staring in disbelief and not daring to speak’ type-poses that really did it for me. I thought it was really cool that I wasn’t the first person to make this connection – see this review at the Internet Movie Database.

If you’re not doing anything right now I suggest tuning in to Channel 4 to watch ‘Young @ Heart’. It’s a lovely film about a group of singers in America who have an average age of 2-3 times my own but perform concerts of alternative music such as Sonic Youth and James Brown. We watched it a couple of weeks back on More4 and loved it. Heart-warming stuff! 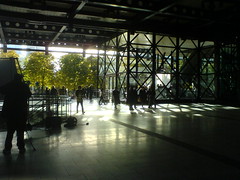 My brother-in-law is visiting us this weekend so we thought we’d take a drive to Spitalfields Market in London. As we walked over to the market, past Exchange Square, we noticed a load of trucks, lights and cables all being shifted around. On the way back we saw scores of people hanging around in smart business dress – pretty unusual for a Sunday – and on closer inspection we discovered that they were all extras standing around waiting to be filmed. The director was none other than David Schwimmer of Friends fame.

Not that exciting but worth a blog! The film doesn’t look that original but at this early stage I’m not sure I can judge. Would be cool to see the Exchange Square scene in the final cut, though.

Mat made me smile this morning when he sent me a link to his friend Vince’s latest blog entry. Going to see King Kong at the cinema? A perfect opportunity to re-use that gorilla costume that’s been hiding in the cupboard!
Found this website while having a little browse last night. It contains links to bittorrent downloads of classic (and some not-so-classic) movies. I’ve kicked off three downloads now and at the rate they are going it’s going to be a few weeks before I get to watch them!
I am very excited to see that Channel 4 are about to start their annual Bollywood season today. I’ve always been interested in Indian culture and music and after much research last year I bought my first Bollywood film – Kuch Kuch Hota Hai. My wife and I loved it (admittedly me a little more than her) and found ourselves singing the songs around the house. It’s a fun movie and had everything I would have expected from a Bollywood film – a big romance, tragedy and lots of comedy. Shahrukh Khan is very good – I found out later that he’s one of the biggest Bolywood stars out there – and Kajol is lovely.

If you want to try one out on Channel 4 this year, I’m told that Murder is the Hindi version of Unfaithful which I thought was great. It’ll be showing at 00:45 on 17 November 2005.

Soon after moving to Berkhamsted my wife and I were quick to find out about the Rex Cinema, a beautiful art-deco cinema built in 1938. The cinema had actually closed in 1988 but reopened in 2004 after three years of restoration from its derelict state.

The cinema is an absolute feast for all the senses. The films that are shown are fantastic – they tend to only be on for one or two days but vary between modern blockbusters, excellent foreign-language movies and classics that may not have been seen for some time. We’ve already been twice in the four weeks since we have lived here – the first was to see 5×2, a recent French film, and the second was to see five short silent Buster Keaton movies accompanied by live piano! We thoroughly enjoyed both of them, but the Buster Keaton night was particularly special for the sheer fun and novelty of the evening.

The cinema is absolutely beautiful inside. All of the seats are made of a lovely red velvet-like material and are gorgeous to sit on. The best thing for us, though, has to be the fact that in the lower half of the cinema you get a rotating red chair seated round a small table with easy access to the fab bar behind – just for a couple of pounds extra from what you pay for a normal seat in the top half of the cinema. A glass of wine with your film? The movies will never be the same again!

Last night we stayed in and watched The Red Shoes, an absolutely delightful film. It tells the story of the Lermontov ballet; how a young talented composer (Julian Craster, played by Marius Goring) and a gifted dancer (Victoria Page, played by Moira Shearer) come to join the company and produce the ballet of The Red Shoes, based on the story by Hans Christian Andersen.

Andersen’s story is about a young girl who wants to have and cannot stop thinking about a beautiful pair of red shoes. When she gets them, an old soldier puts a spell of them that makes them dance without stopping – eventually an executioner chops off her feet and ultimately she dies. In the ballet within the film, the shoes dance the girl to her death. This story is reflected in the plot of the film itself, with Victoria ultimately being given a choice between her life and her art.

The documentary on the DVD tells us that the theme of dying for your art has made the film very popular with talented directors such as Martin Scorsese and Steven Spielberg. At the time of its release in 1948 this theme was quite a statement – World War II had just finished and people were used to people dying for their country and dying for democracy – dying for art must have seemed relatively frivolous and quite offensive. Gorgeous as it is, the film was not promoted extensively in the UK and did not prove popular at first, as this review from The Monthly Film Bulletin on the BFI website shows. However, the film was nominated for five Oscars and won two – for Art Direction (Color) and Music – and went on to become a classic.

We went out on Thursday night to the wonderful Phoenix Cinema in East Finchley to see Vera Drake, the latest film from director Mike Leigh. I didn’t quite know what to expect – we had seen the trailer a week before, which looked excellent, but I had read the review in Uncut magazine, which didn’t like it at all. It’s a wonderful, if very tragic and depressing film – probably one of the saddest things I have ever seen. Good for a melancholy weeknight.

Having seen the film I completely disagree with the Uncut reviewer, John Mulvey, when he calls the film “crude and unconvincing” and says that the director “drags out his thin, grim plot with sadistic relish.” I felt the film got the pace just right – we got to know the characters and the family before things start to go awry. From the consolidated reviews over at Metacritic and Rotten Tomatoes, it looks like most people agree.

Last night, we went out to the wonderful Phoenix Cinema to see the new Michael Moore film, Farenheit 9/11.
END_OF_DOCUMENT_TOKEN_TO_BE_REPLACED
I stayed up late last night watching the remastered DVD of The Kids Are Alright, which I treated myself to some time ago. I’d never seen any footage of The Who live before and I was completely taken aback. They were the kind of band that just get you grinning with joy when you watch them – Pete Townshend jumping around with a tambourine at the start of Won’t Get Fooled Again, Roger Daltrey swinging his mic all over the place, John Entwistle hardly moving and Keith Moon just bowling you over with his amazing, unrelenting animation.
END_OF_DOCUMENT_TOKEN_TO_BE_REPLACED
I finally got around to watching my Threads DVD last night. I really can hardly believe I watched it as a kid – it was so much more disturbing that I remembered, and very graphic. It’s one of those films that needs to be watched once – like Schindler’s List – as it has such an important message, but it’s definitely not something you would watch again and again.
END_OF_DOCUMENT_TOKEN_TO_BE_REPLACED
I’ve been using this site a lot recently – it scans a number of worldwide on-line retailers for the cheapest DVD price (including postage), converted into sterling. Good if you have a multi-region DVD player.
Well, what do you know? Just three days after complaining about the price of copies of Threads on eBay, somebody in Canada put up a ‘buy it now’ copy for just under 12 quid! It’s definitely worth persevering for the right price, it seems! I’ll have to post a review here after I’ve seen it again…watch this space.