I laughed along with everyone else. Back in 2003 I was an enthusiastic lurker on Metafilter, a ‘community weblog’ where everyone could contribute. Members would write a short ‘front page post’ that linked to something new, interesting or funny on the Internet. In May of that year, someone posted about ‘Star Wars Kid’, a video of a kid dancing around with a pole. It had already been remixed by someone to give him a lightsaber. We thought it was hilarious.

Looking back now, it’s interesting to read the comments. 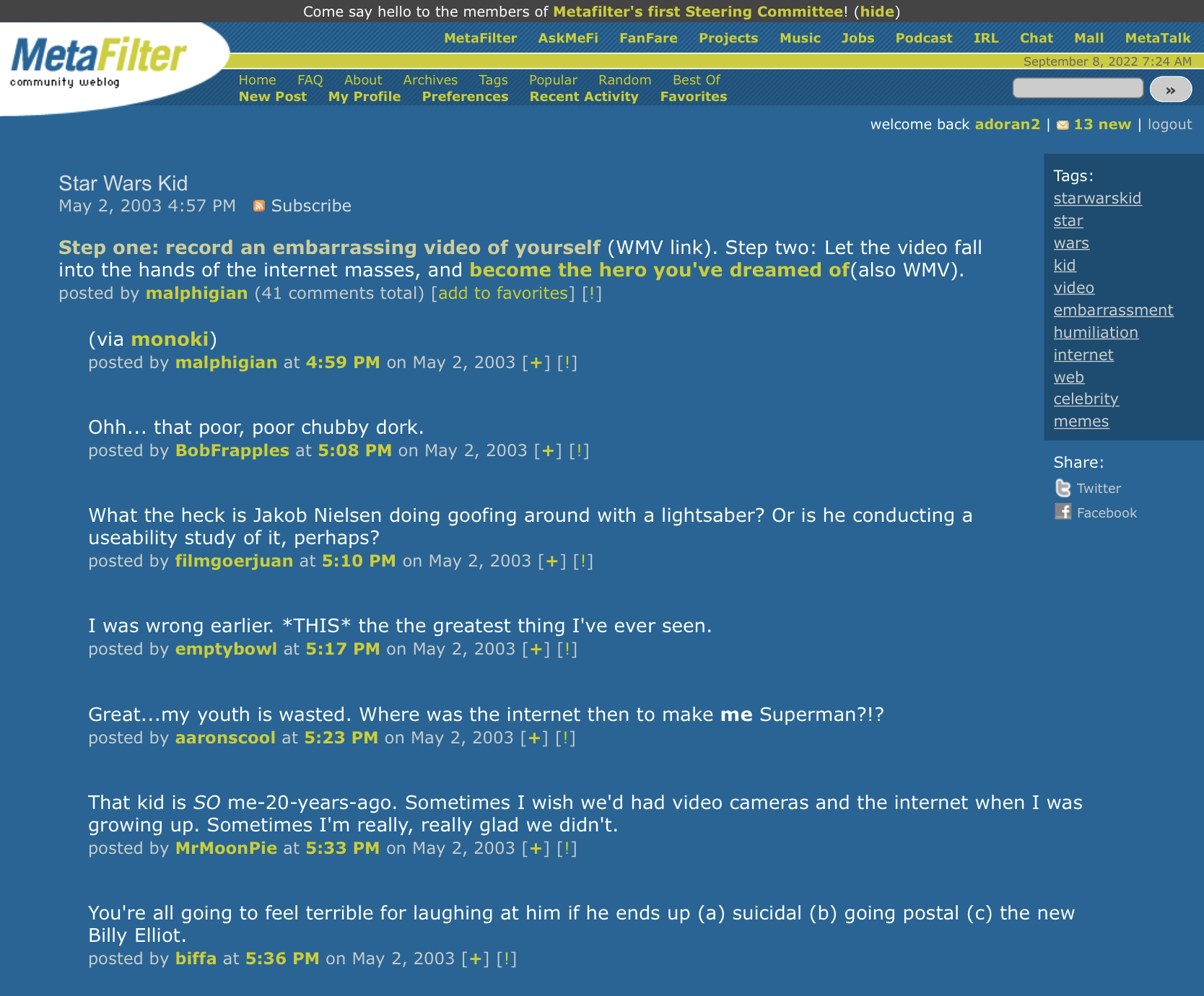 I suggest you put aside 90 minutes to watch Star Wars Kid: The Rise of the Digital Shadows1. It’s profound, and had me in tears.

Viewed through my 45-year old eyes in 2022, the whole episode is shameful. It amounted to an unbelievable, global level of bullying of Ghyslain Raza, the subject of the video. I cannot imagine what he went through at the tender age of 15, the same age that my eldest son is right now. The video went so viral that it even made it to the New York Times:

…he would have preferred that the video, which he had not intended anyone to see, had remained private.

“People were laughing at me,” he wrote in a follow-up e-mail message. ‘”And it was not funny at all.”

Seeing Raza in the documentary, having come through such an unbelievably intense period in his life to be the deeply thoughtful, intelligent and empathetic person he is today, is inspirational.

Andy Baio’s recent blog post brought the documentary to my attention. It turns out that Baio’s blog — something I have followed on and off for years — was pivotal in the video ‘going viral’ back in 2003. One of the documentary’s most electric moments is when Raza visits Baio in Portland. We were all younger back then; so many of us looked at the video and laughed, and it would be easy to say that none of us knew any better. Some of the comments on the Metafilter post tell me that we did. In the film, to his credit, Baio doesn’t make ‘easy’ excuses such as now having a teenage son of his own made him realise the gravity of what he shared, or that nobody could have known at the time how viral the video was going to go. Looking back at the later posts on Waxy.org from 2003, I can hear some regret in the way he tries to reframe the narrative.

It’s incredible that the kids who originally digitised the video and posted it to the Internet have never apologised. You can hear that Raza has carried this with him. Perhaps this is a consequence of the USA’s litigious culture; if you apologise, you can be seen to be admitting a degree of liability.

The documentary made me think about other Internet memes that I’ve laughed at over the years. I’ve watched and shared Ain’t Nobody Got Time For That so many times. Kimberly Wilkins, the star of the video, made some money and gained fame following the video’s release. From Wikipedia:

The video garnered Sweet Brown many appearances on television, including a visit to ABC’s The View. Brown also plays a cameo role in the Tyler Perry 2013 movie A Madea Christmas saying a part of her line from her television interview during an interview at the end of the movie.

Years ago, I found one of my children laughing at a YouTuber who had been paying ‘rent a video message from Santa’ people to say silly or outrageous things. His video was a compilation of the videos that had been returned. We had a long chat about whether what the YouTuber was doing was okay. How far was this really from people who have paid homeless people to fight each other? In both cases there is a financial transaction which the person receiving the money could refuse. But there is a power imbalance, and bad ethics.

Does the fact that Kimberly Wilkins made money and frame from her video make it okay to laugh at?

There are still videos out there being shared and remixed. A chunk of TikTok culture seems to be exactly this. I’ve ventured onto the platform a few times, but have been put off by videos taken by parents of (presumably) their own children doing or saying silly things, including children who seem to have a disability. I doubt the children in the videos consented to them being shared.  Star Wars Kid: The Rise of the Digital Shadows makes the point that videos with millions of views are now unlikely to ‘go viral’ and make the news in the same way that they did in 2003. So have we just got used to them?

The film gives some hope through Meme Librarian Amanda Brennan, who points out that ‘consent’ is now a word commonly used and well-understood by young people. Back in 2003, it wasn’t so prevalent. People are much more aware of the impact that a shared video can have on their lives.

From the New York Times article:

“I personally feel that he is like me and all of my friends,” said Andy Baio, 26, a Web developer in Los Angeles. “This spread around the world partly because he’s funny and awkward to watch, but also because there’s a big part of him in a lot of us.”

I’m not sure that the spread of the video was because people related to the character of the ‘Star Wars Kid’. Perhaps this was Baio trying to make it okay, reframing the narrative to put himself in the place of Raza after having seen the impact of his blog post of the video. The documentary felt like a mirror being held up, forcing me to question my own online behaviour over the years, and the consequences of having a laugh at someone else’s expense. It’s an uncomfortable watch, but an essential one.