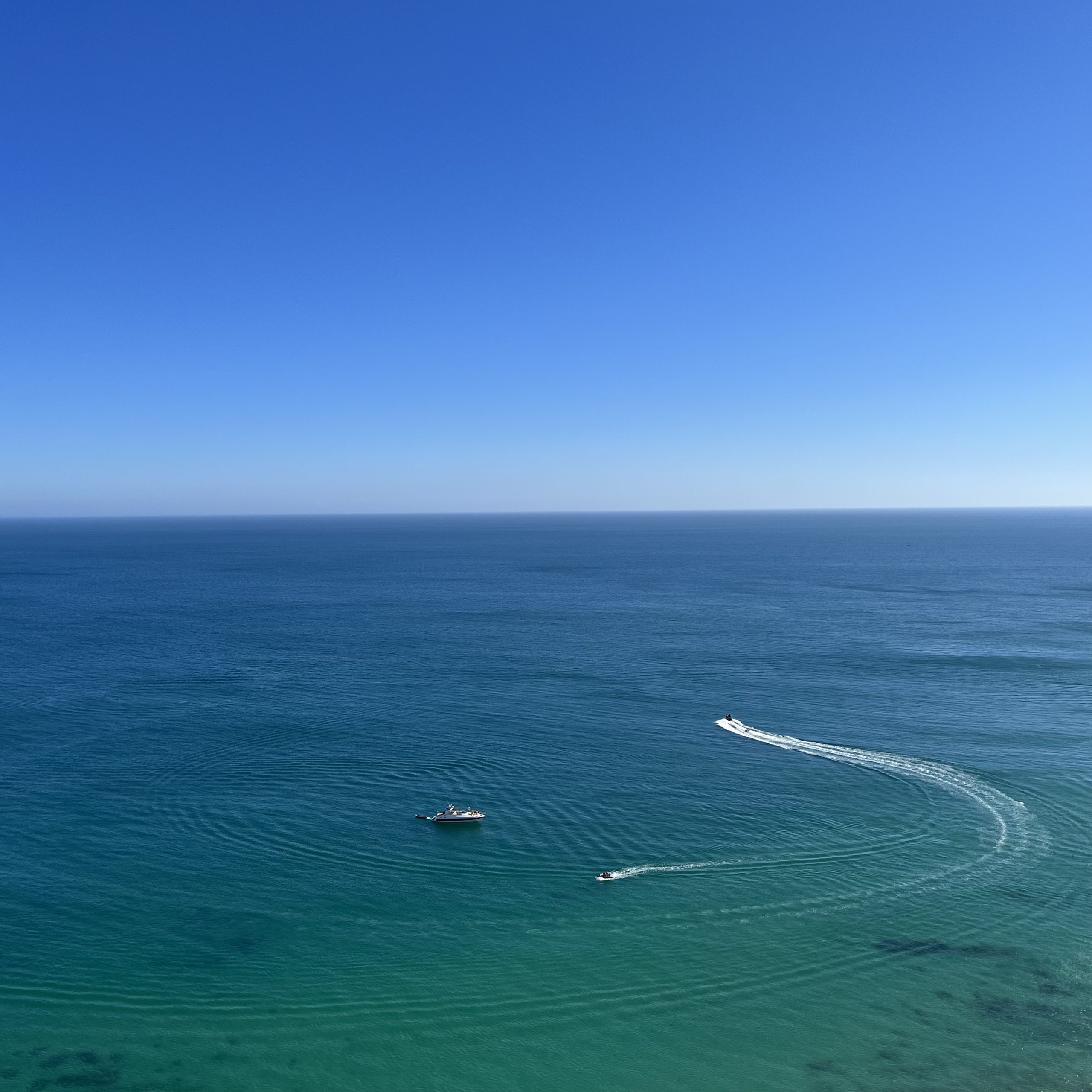 Off the coast near Burgau

We’ve just come back from a lovely week in Burgau, Portugal, which we spent with some of our closest friends. Our last holiday together was in 2018, so it was great to get the band back together again.

We stayed at the Ocean Blue villa, hosted by the lovely Lucy, Sean and Sophia. The villa is a perfect setup with three two-bedroomed apartments all in a row, and another with a double bed that we didn’t use. As well as the beautiful villa, they offer boat trips with paddle boarding, exercise sessions and mountain biking. The villa is located on an excellent spot near the Algarve coast which gives easy access by car to lots of beautiful beaches. 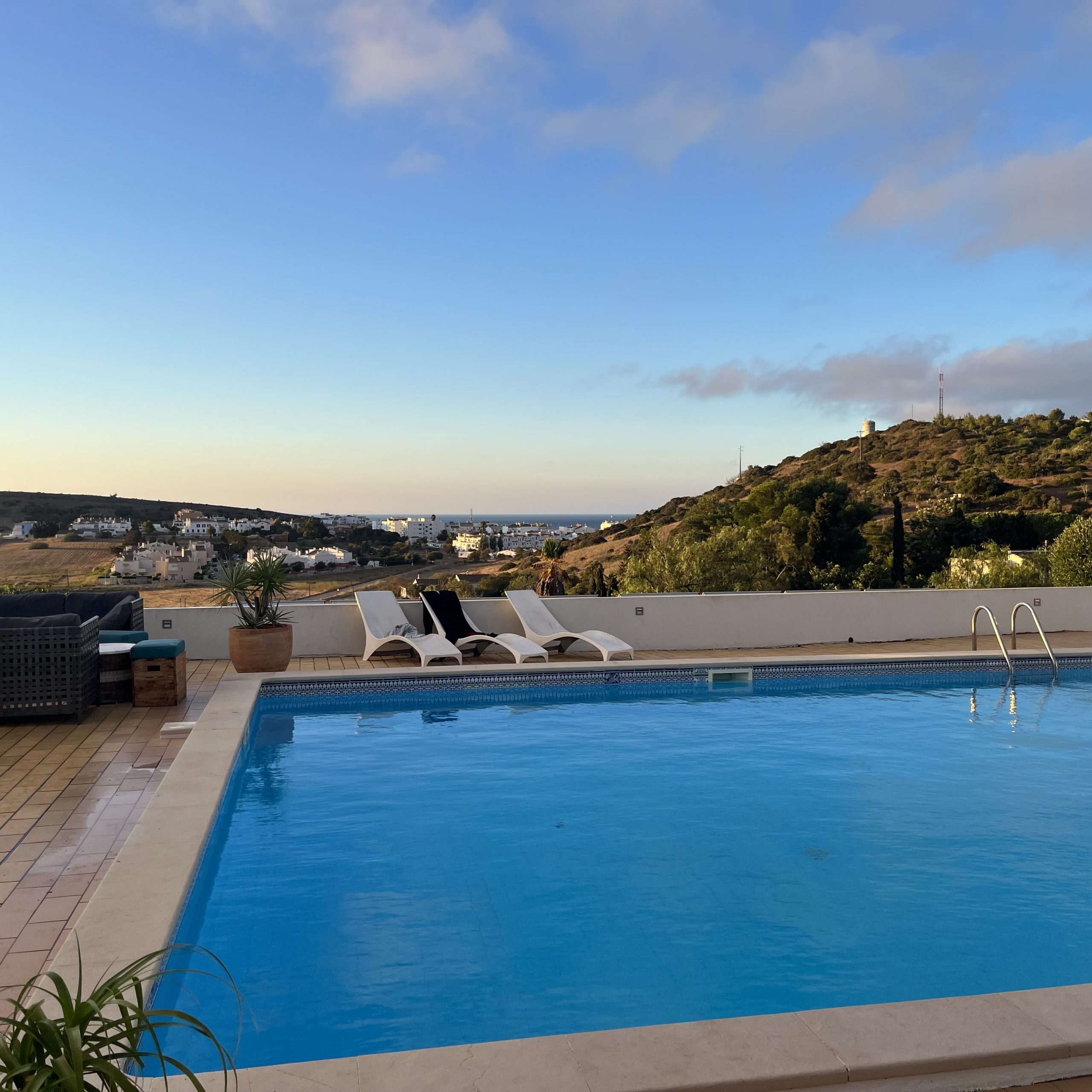 Early morning by the pool 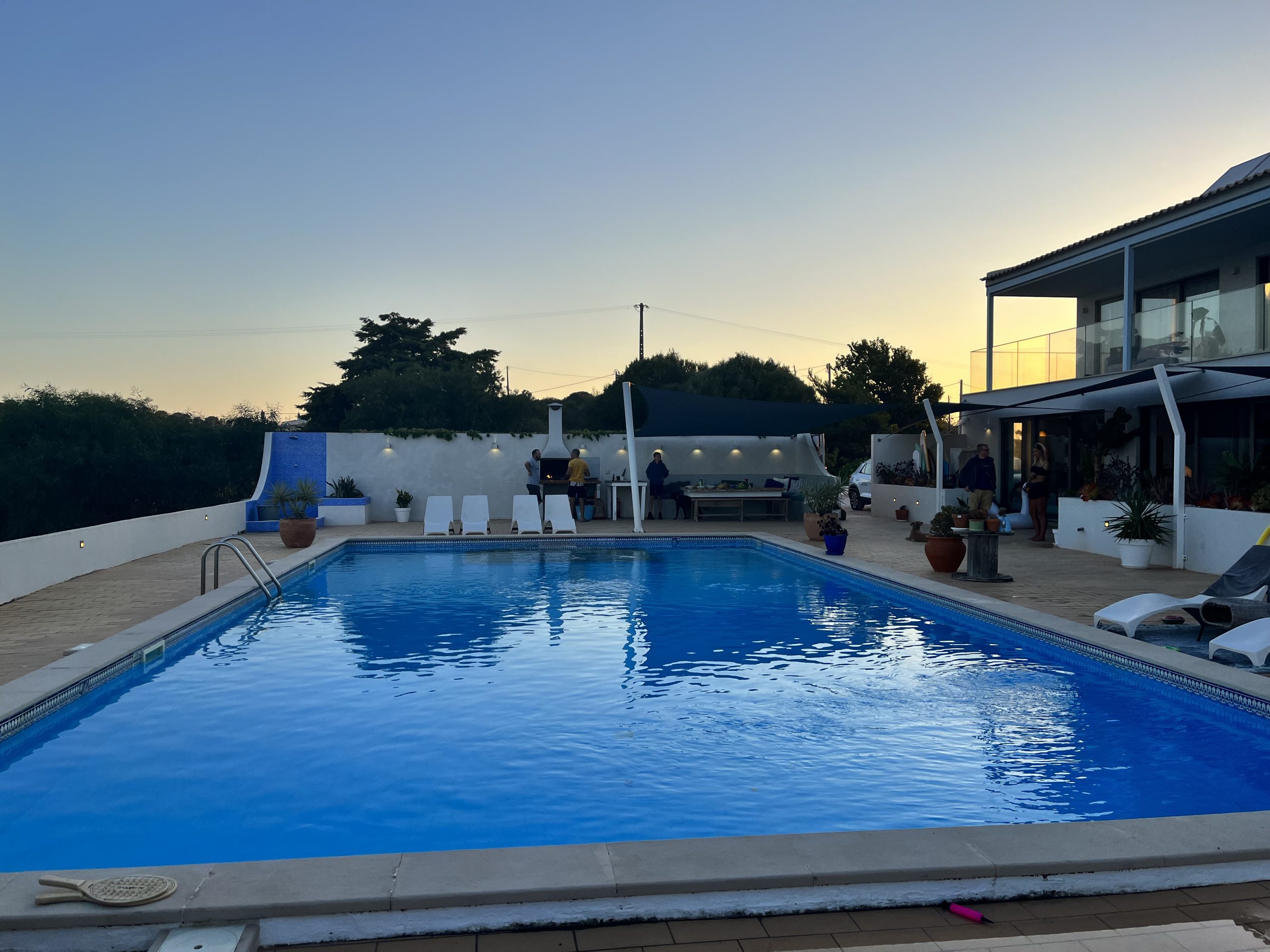 Barbecue night by the pool. At this point we were still about 2–3 hours away from eating.

The journey there was a painful one. One small member of our party had broken her little toe a few days before, so took a wheelchair to the gate and hobbled onto the flight wearing a big protective foot brace. After having a couple of days of normality, the pressurisation of the aeroplane cabin also caused my bad tooth to go bananas. I could only focus on clutching my jaw in pain. I was worried that I would have trouble for the whole week, but the pain disappated a couple of hours after we landed and didn’t cause me any issues again until the journey back.

On the flight over, we spotted something burning somewhere in Spain, presumably a wildfire. 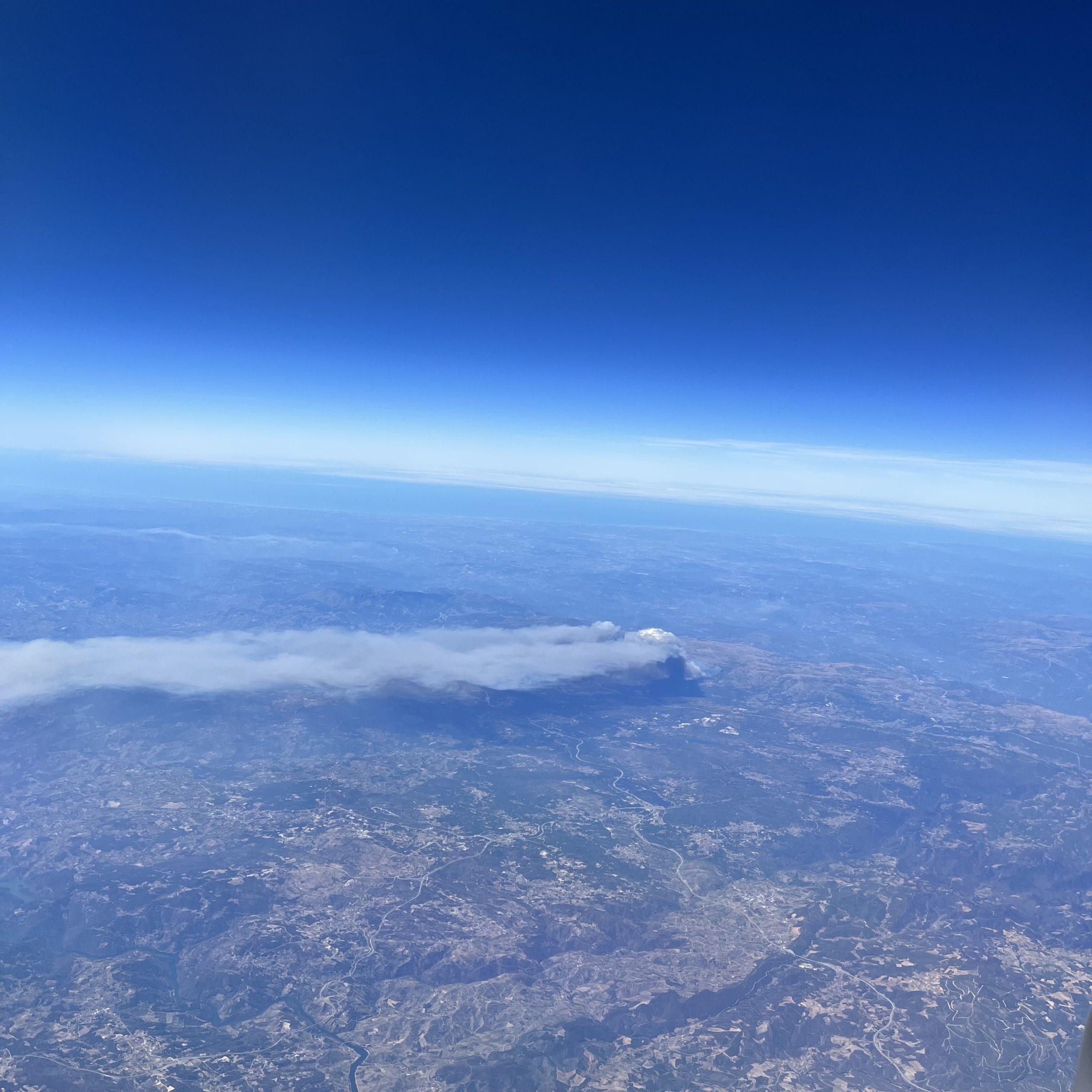 After spending a very hot week in southern Turkey followed by a very hot week in the UK, I figured that I was all set with one jumper (“for the plane!”) and a few pairs of shorts. I was wrong. Portugal was hot, but as soon as the sun went down it got very chilly. So chilly that we resorted to using blankets handed out by restaurants for people eating outside during the evening. One night it felt too cold to sit outside after we got back home, so we ended up in one of the apartments.

It was the first trip in a long time where I couldn’t rely solely on credit cards. Lots of businesses were cash only, which more than once resorted in us running to a cash machine after finishing dessert and coffee.

Finding restaurants was easy, but finding places which could take 12 of us turning up at once was slightly more difficult. We’d booked a couple of places in advance and another couple when we got there as we found that wandering around looking for somewhere was a bad strategy, particularly when one of us had a broken toe. We enjoyed eating lunch in Love Burgau, the beautifully presented dishes in Miam and the pizzas in Corso Pizzeria, but by far our favourite was Pizzeria D’Aldeia — great pizzas and salads, as well as almond cake to die for. 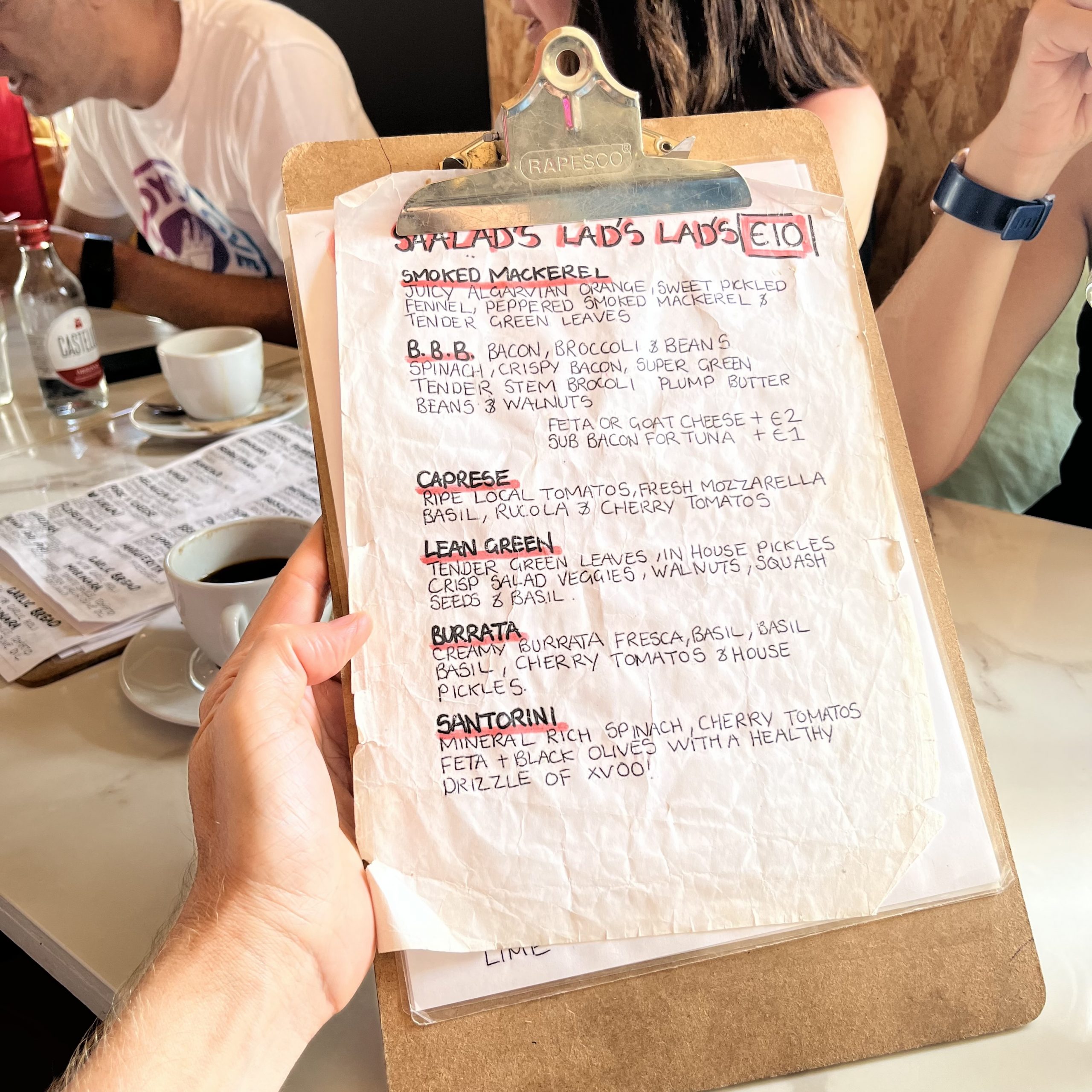 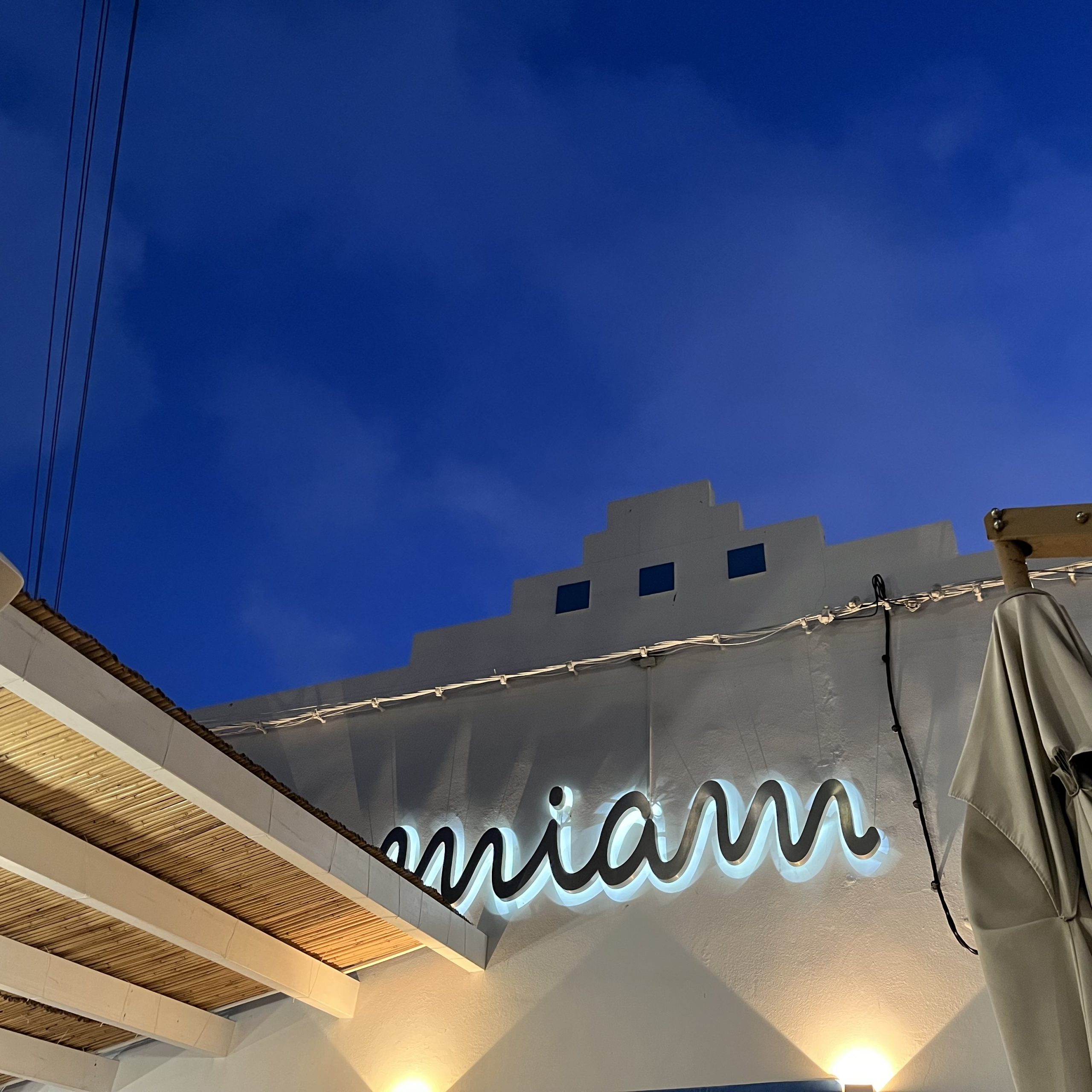 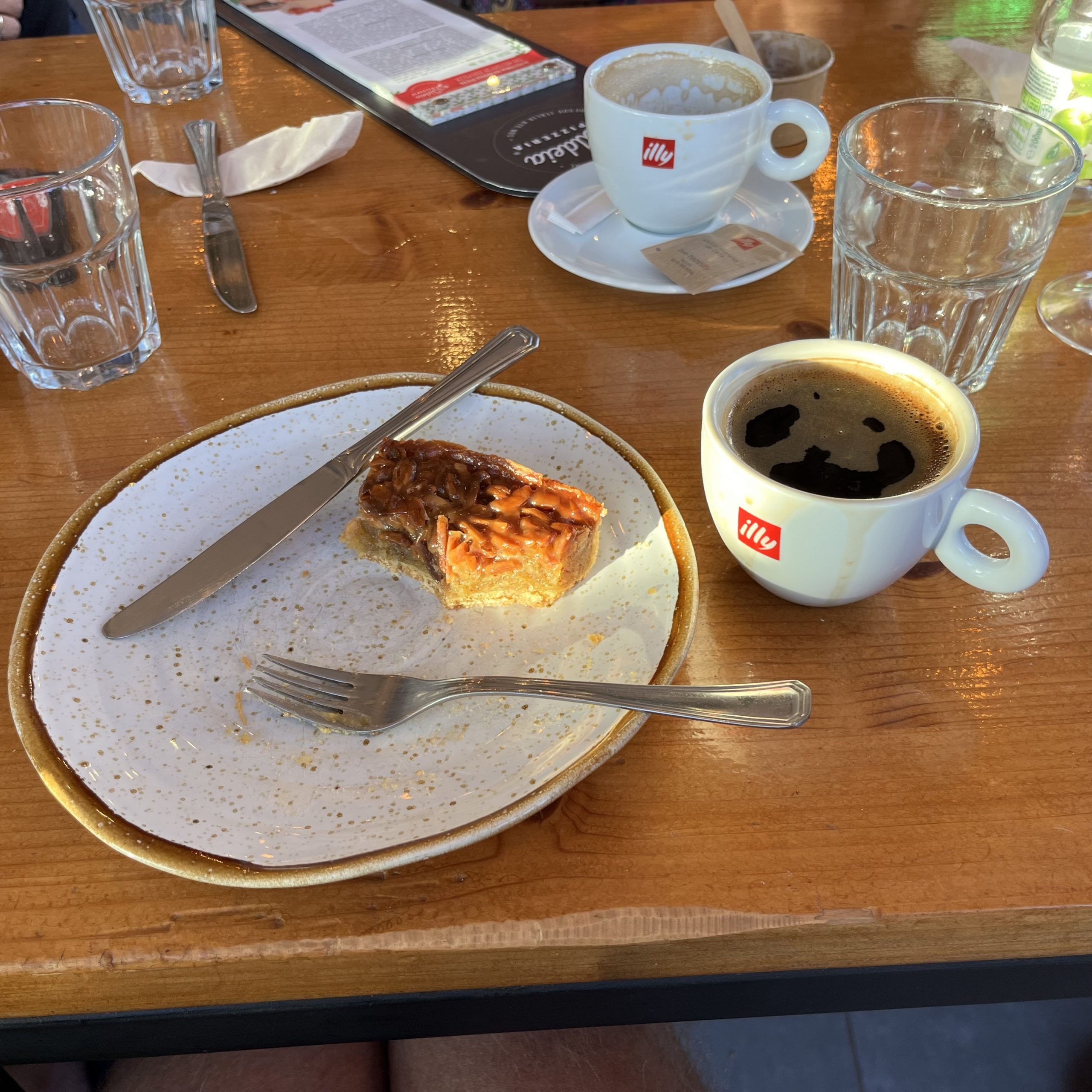 Almond tart to die for

We loved the pool in the villa, which was filled with salt water instead of being treated with chlorine. The beaches we visited were beautiful — Salema, Zavial (great for bodyboarding!) and Luz — but I have a love/hate relationship with them, worrying about looking after all of our stuff, having enough shade and sand getting into absolutely everything. I had no idea about the recent history of Praia da Luz until my wife told me as we drove there that it was the location where Madeleine McCann went missing. It was strange to think about it as we sat on the beach amongst all of the other holidaymakers. 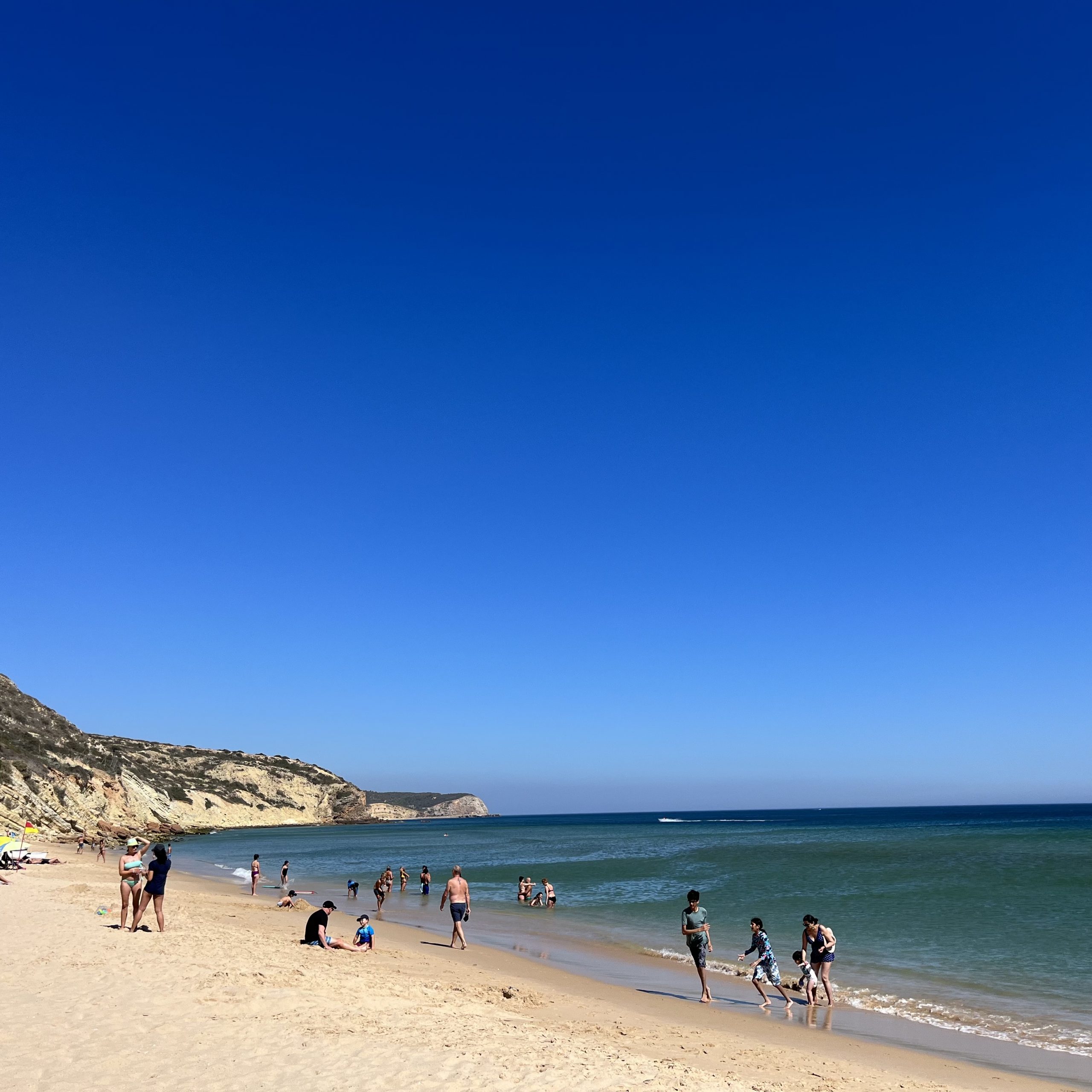 We took a half-day excursion by boat from Lagos Marina out to the ‘grottos’ to have a go at paddleboarding. It was a chilly, grey start to the day and the sea was uninviting. We soon forgot about the weather once we had anchored up, donned our wetsuits and got in the water. Paddleboarding is hard! I managed to get up on my feet without too much trouble and could paddle around quite easily, but found that I would suddenly lose my balance for no reason whatsoever. It was fun to cruise around the little caves and rock formations and to jump into the water from the roof of the boat. 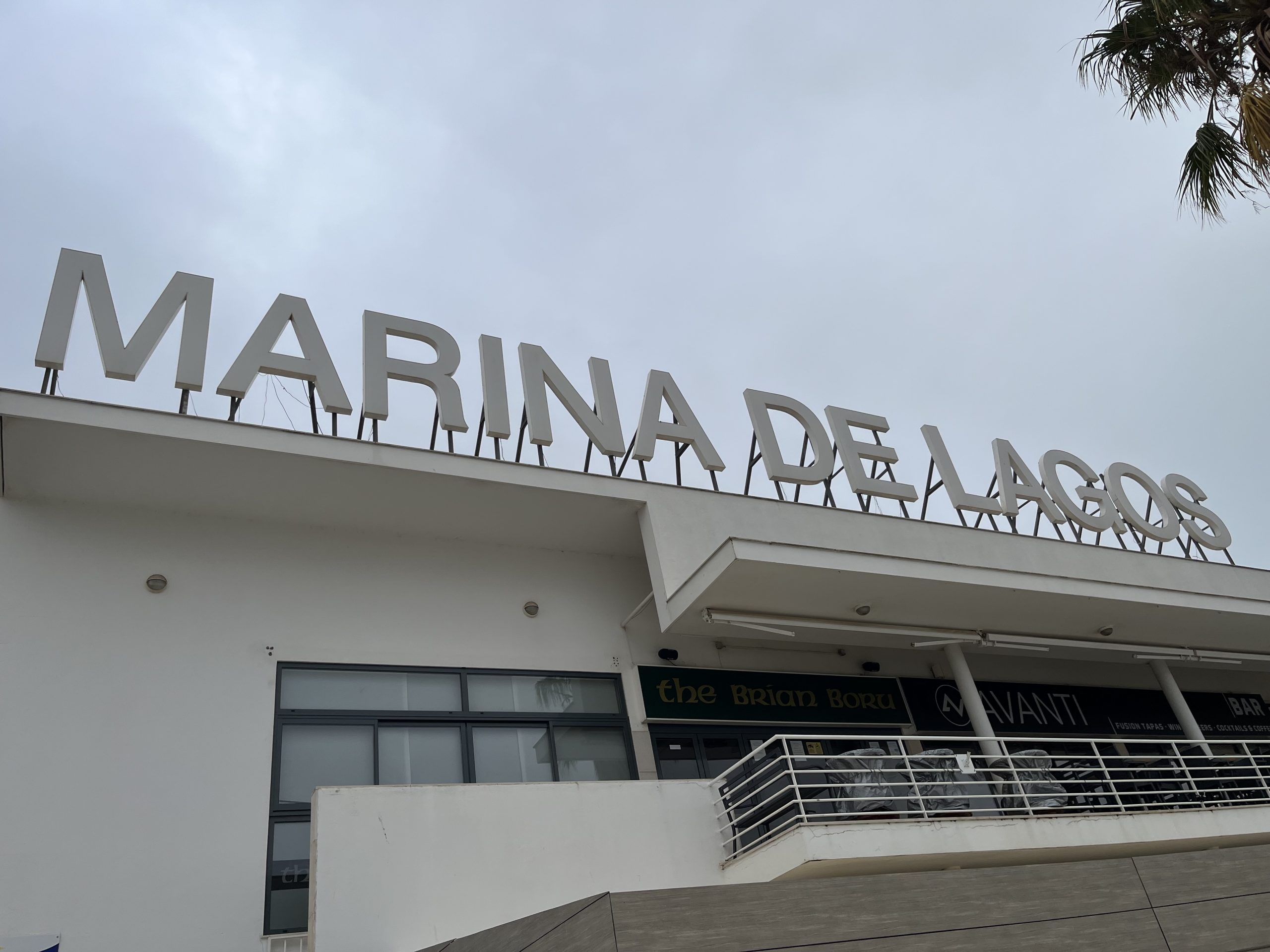 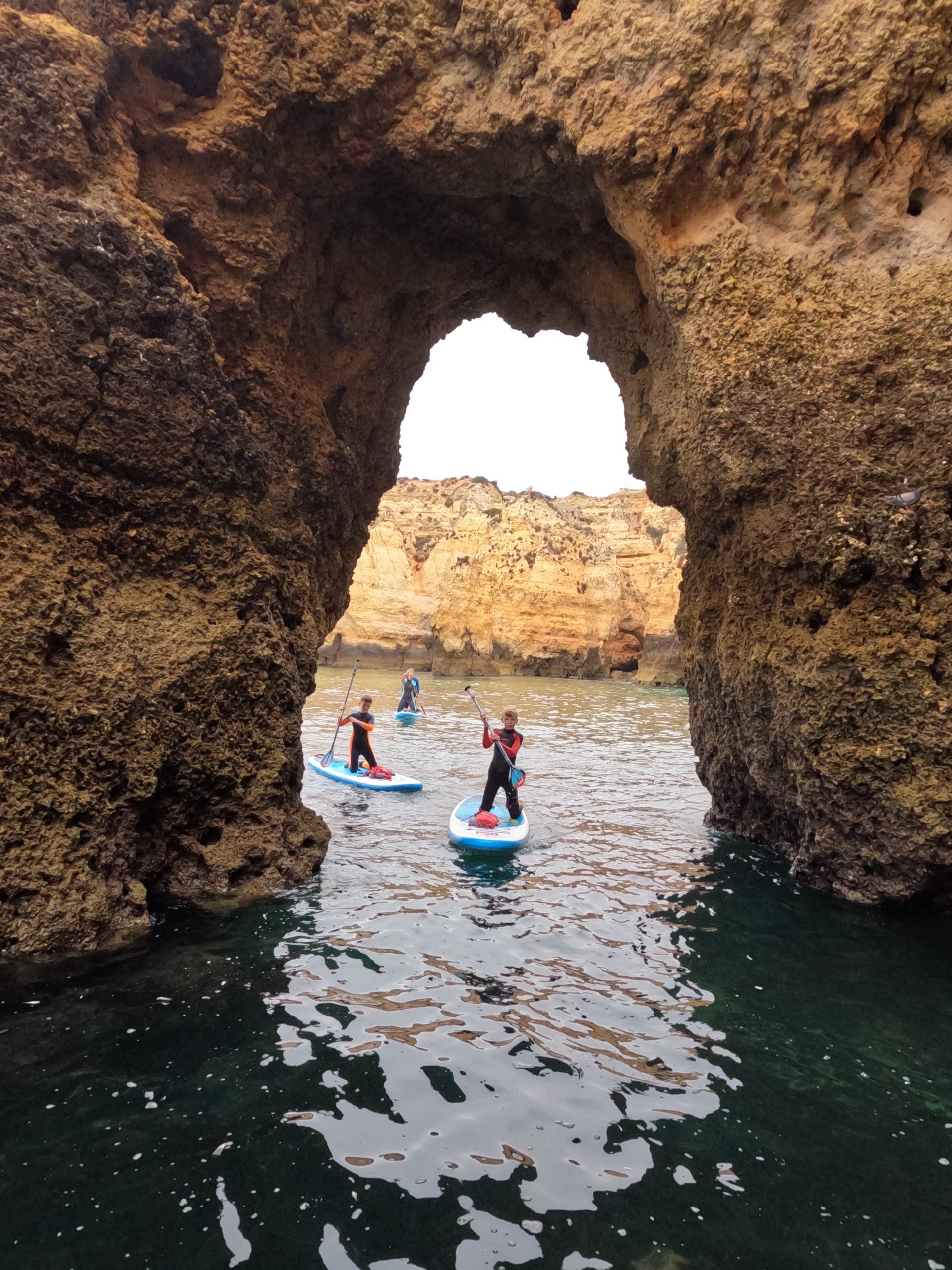 Paddleboarding through the grottos 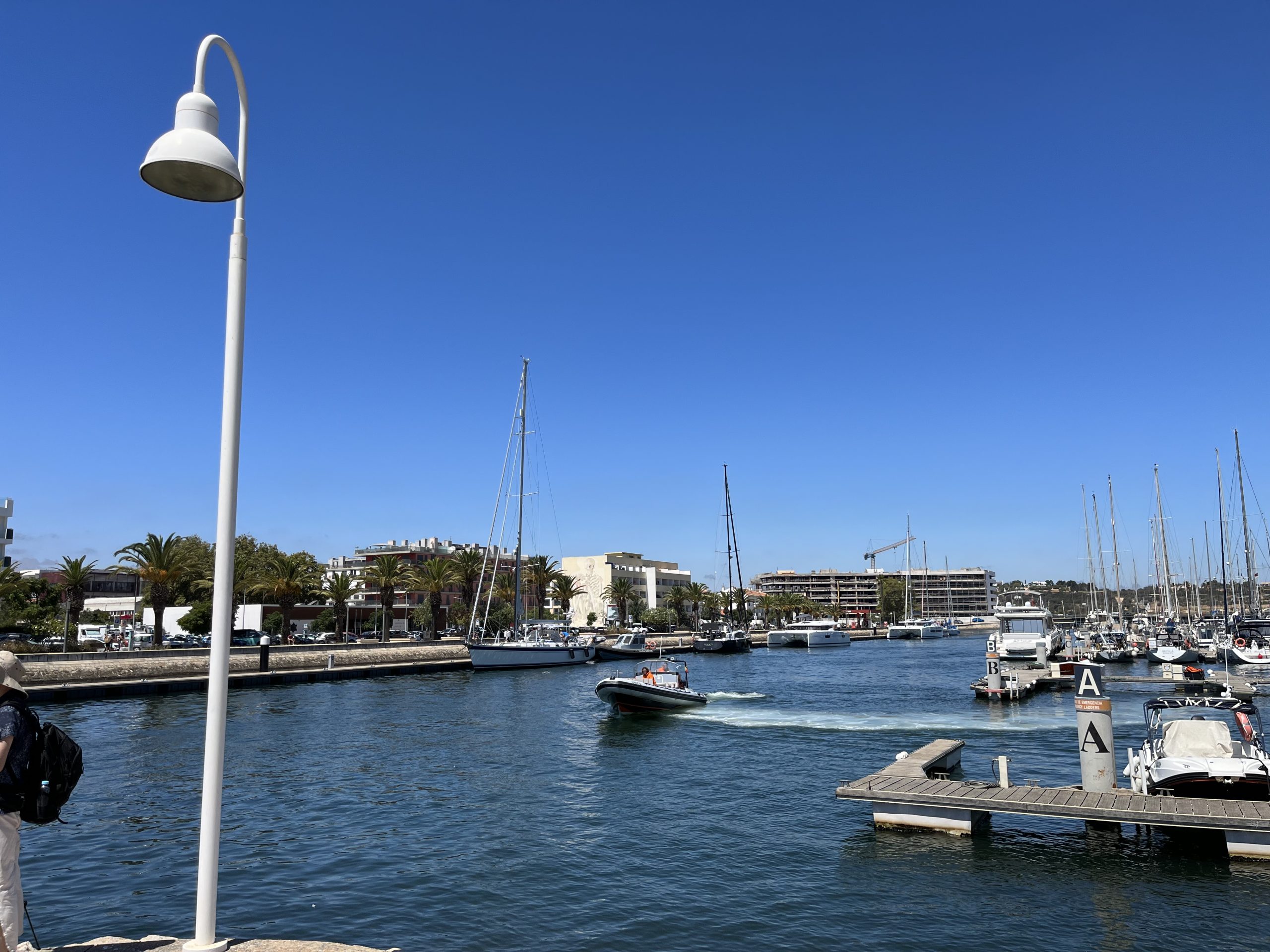 The weather in Lagos was a lot lovelier when we returned

That afternoon we wandered around the streets of Lagos. We’d been signposted towards the MarLe coffee van, where they serve drinks with zero waste. Once you’re done with your coffee, you can eat the oat-based waffle cup that it came in. A fun concept which I hope takes off. 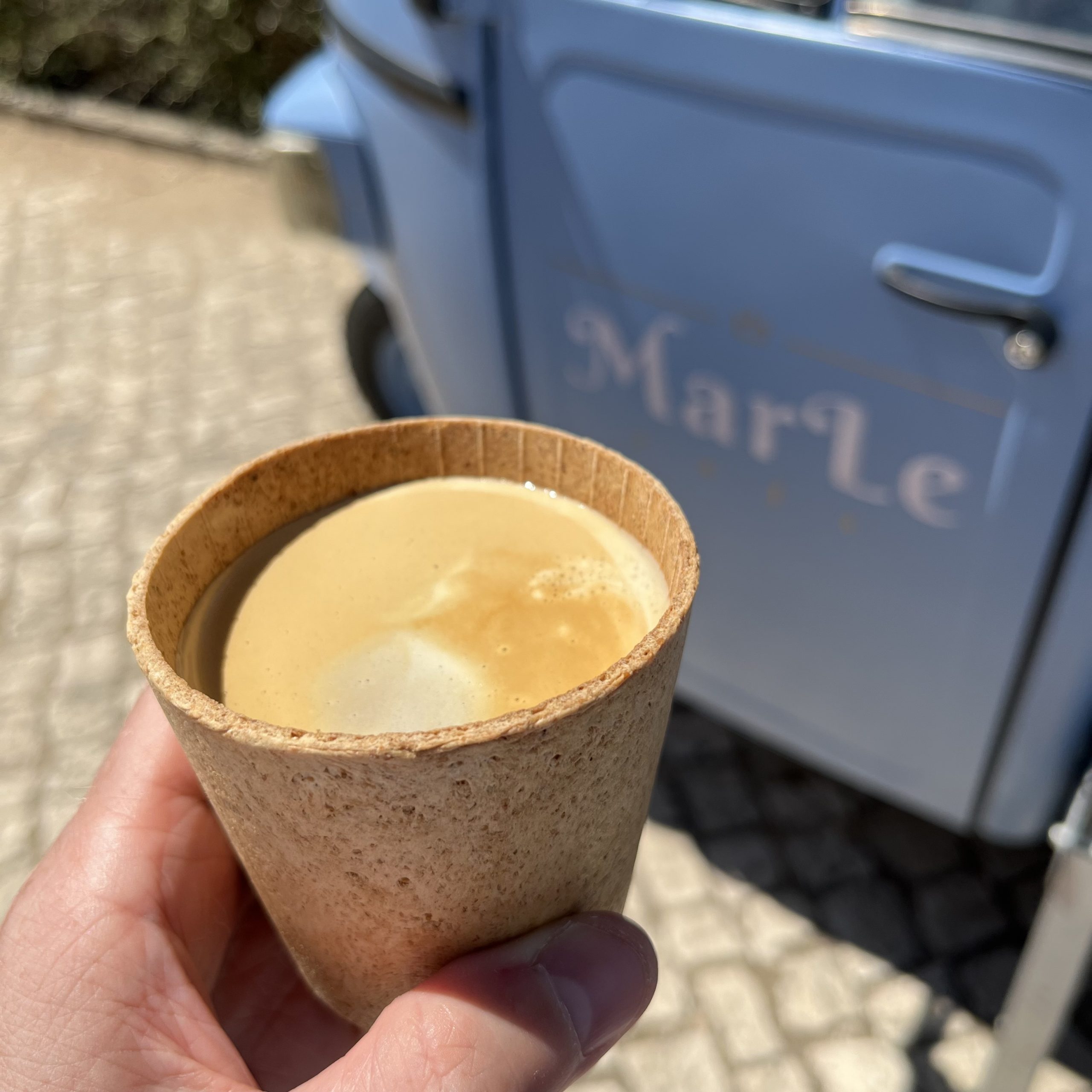 Lovely coffee, and the cup was delicious too 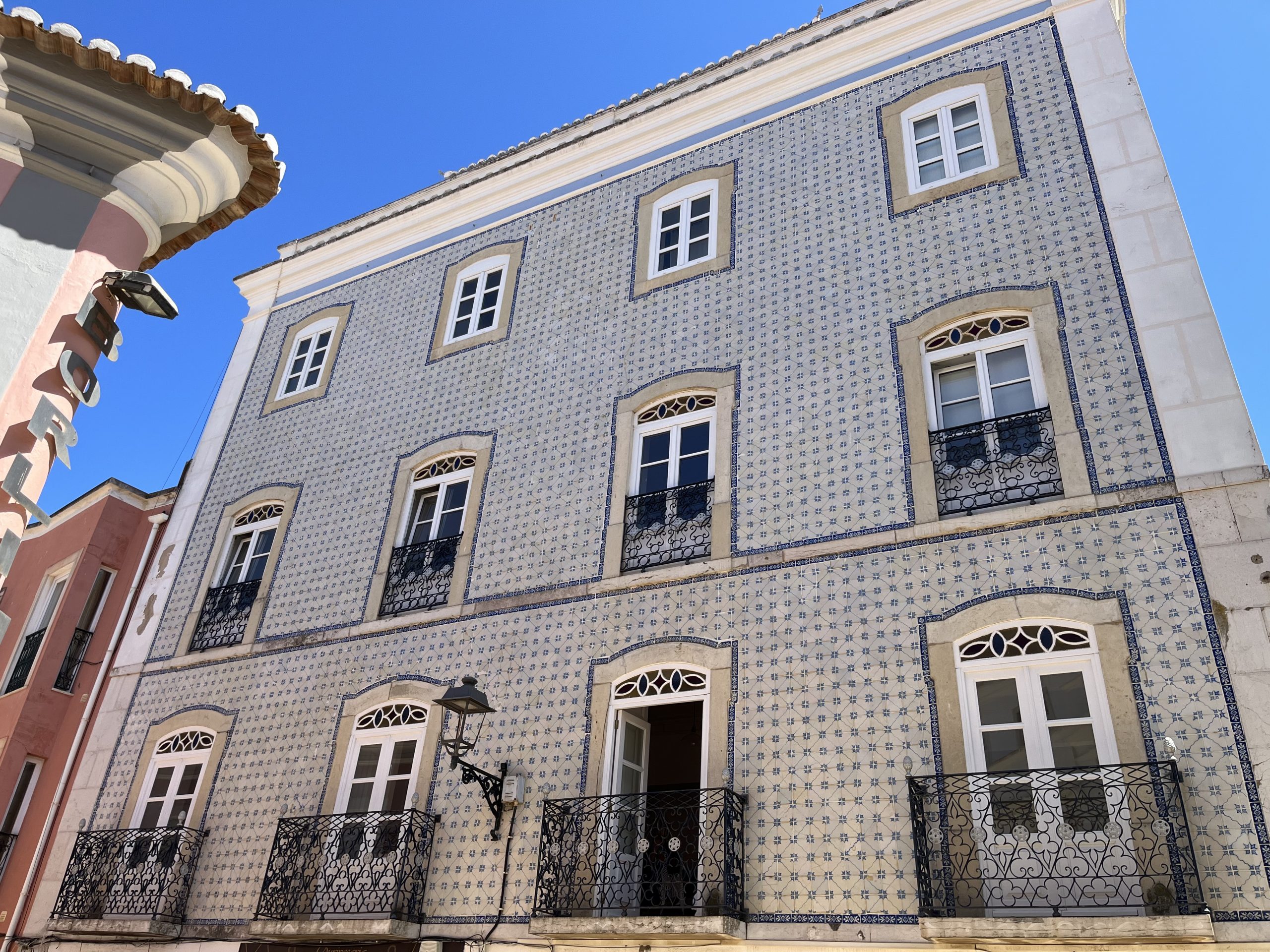 For lunch, we stumbled across the excellent Poké Lagos which served wonderful bowls of goodness which we ate in the street outside.

As we walked around Lagos, one of the children had picked up a leaflet for Slide & Splash, a water park close to Portimão. It looked like a great day out, so we booked it. And then we read the reviews:

We got there early. It was very busy, but nowhere near as bad as this review made out. I remember going to Wet ‘n Wild in Las Vegas as a kid which I think had similar levels of queues. The kids managed to get on three or four different slides in the first hour and this then slowed as the day went on. It was just like being at a theme park, but wet, and without the chance of buying a ‘fast pass’ to jump the queues. The slides were excellent and we had a great time. 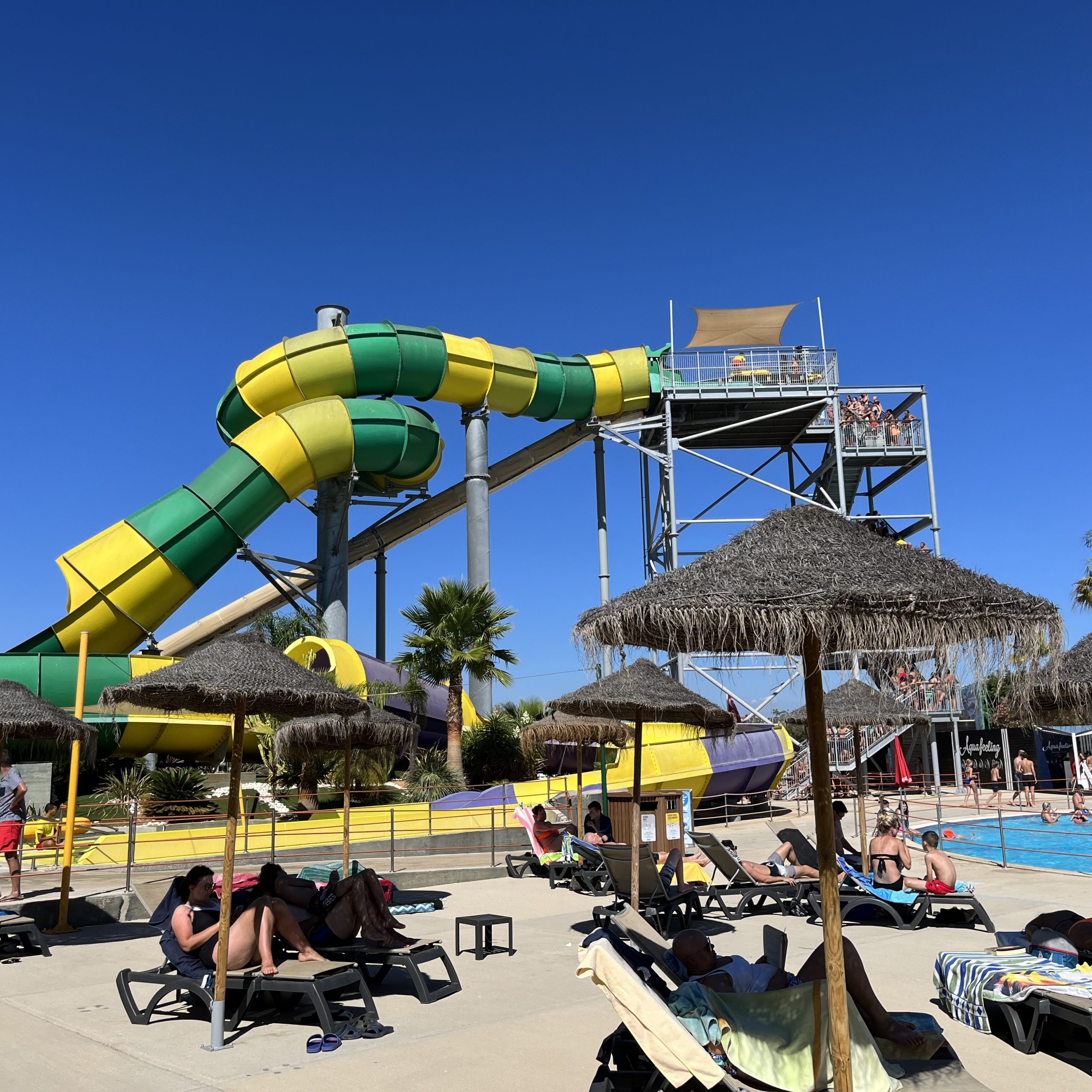 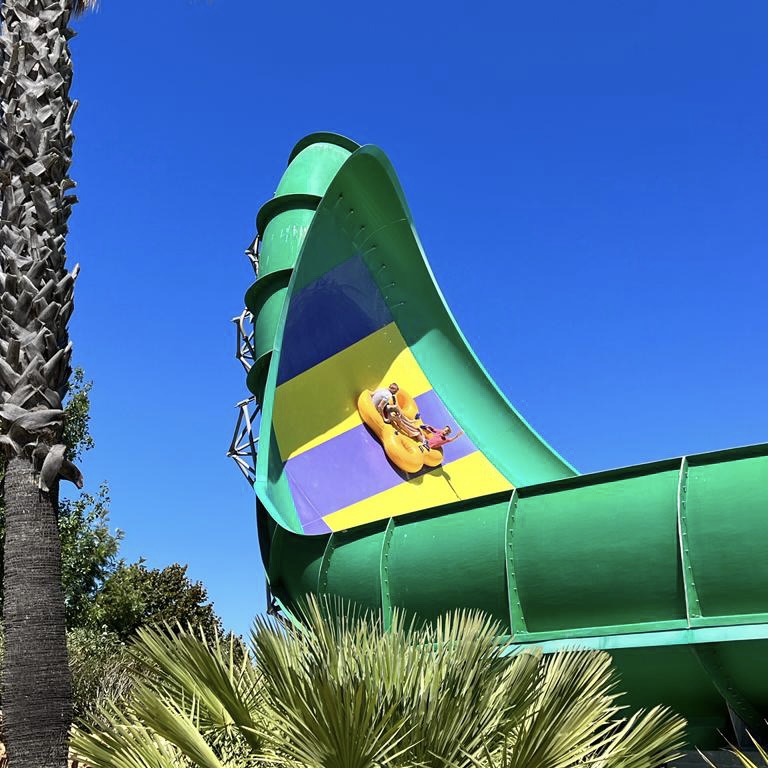 Sharing a ride on The Big Wave with my youngest son

Mountain biking on the trails surrounding the villa was fun, although we didn’t pedal that far. It must be difficult to offer paid guided rides that are suitable for a wide variety of riders. We took the bikes along the rocky paths and ended up at an old fort where our guides handed out beers to drink in the sunshine. 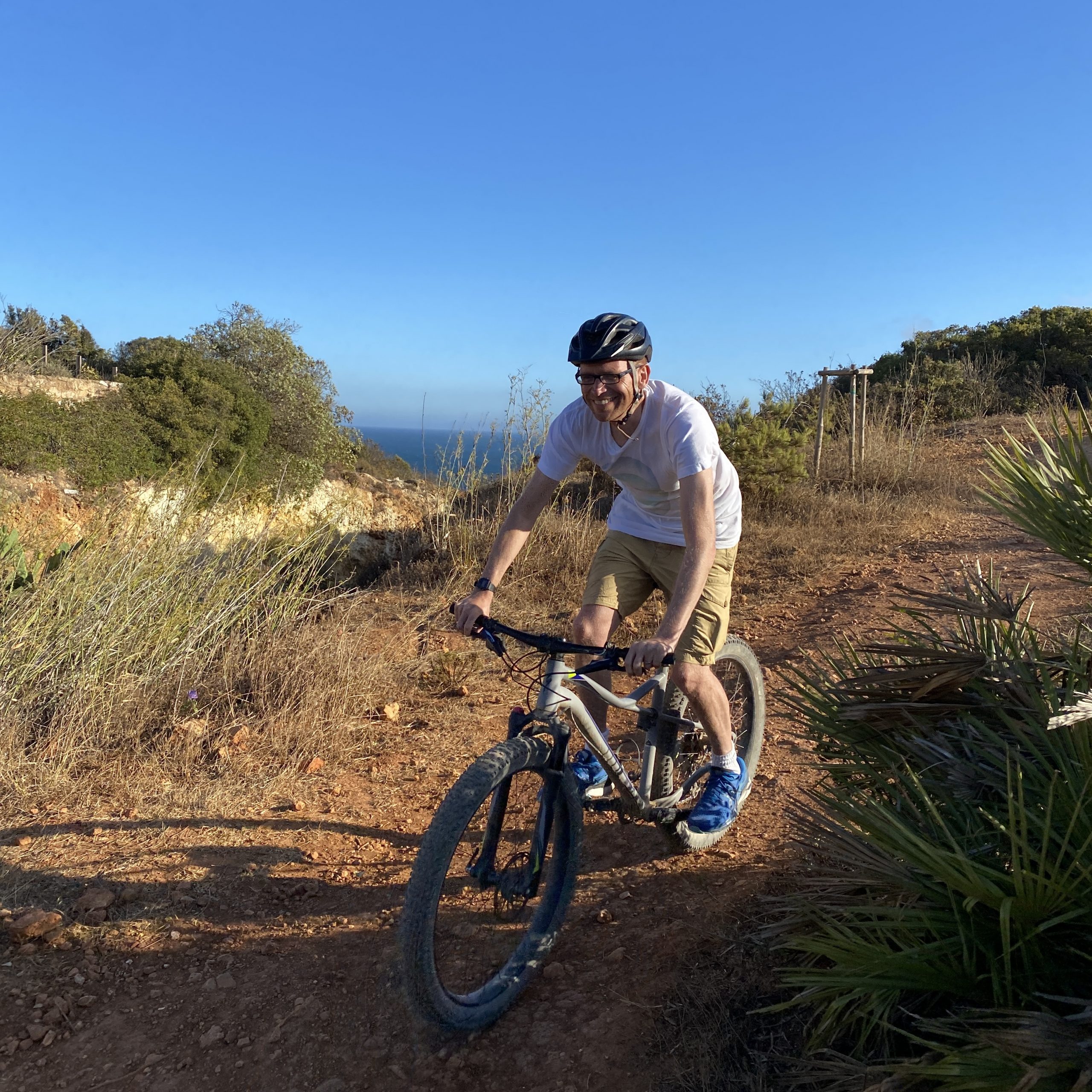 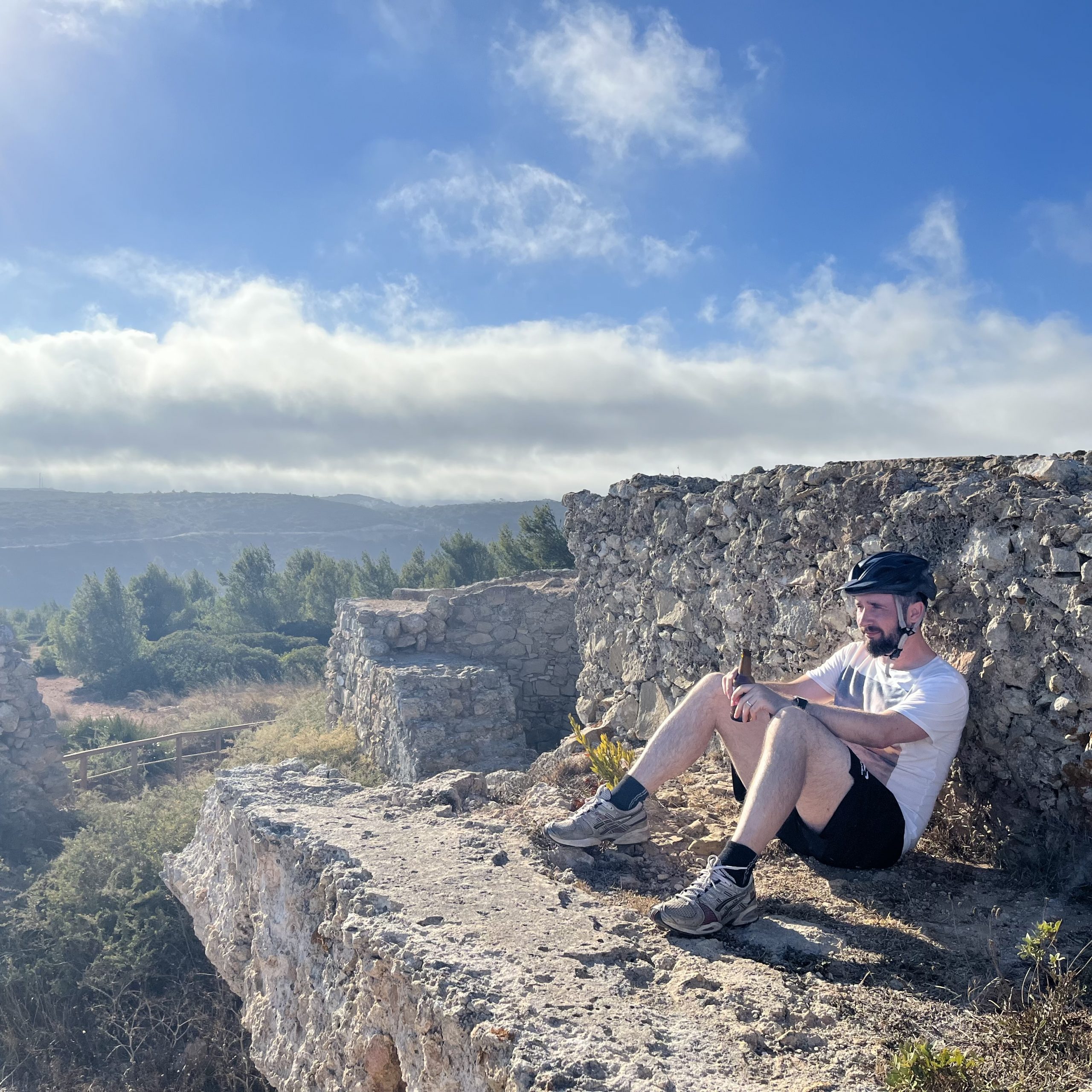 Beer in the sunshine

Unfortunately the trip had a bad ending when one of our riders faceplanted into the floor after hitting a rock. He was very badly bruised on his hand, legs and face, and we were grateful that he had been wearing a helmet.

One of my friends on the trip is training to run the London Marathon later this year. I took advantage of this by heading out on a few early morning runs with him during the week. After running a 10k at the start of the week I was so pleased to complete my first half marathon distance. It involved climbing up a very big hill in Praia da Luz before making a gentle descent down the other side. 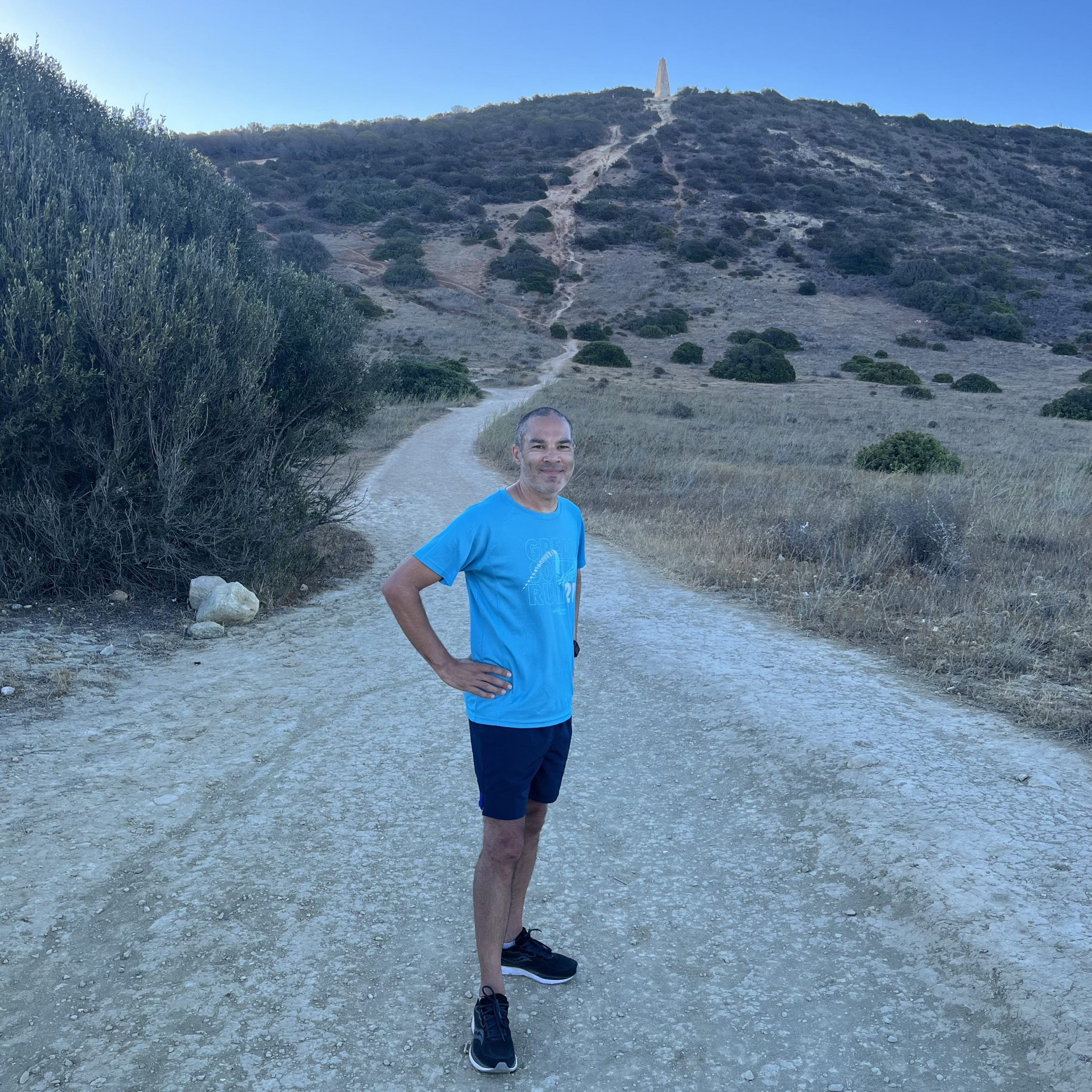 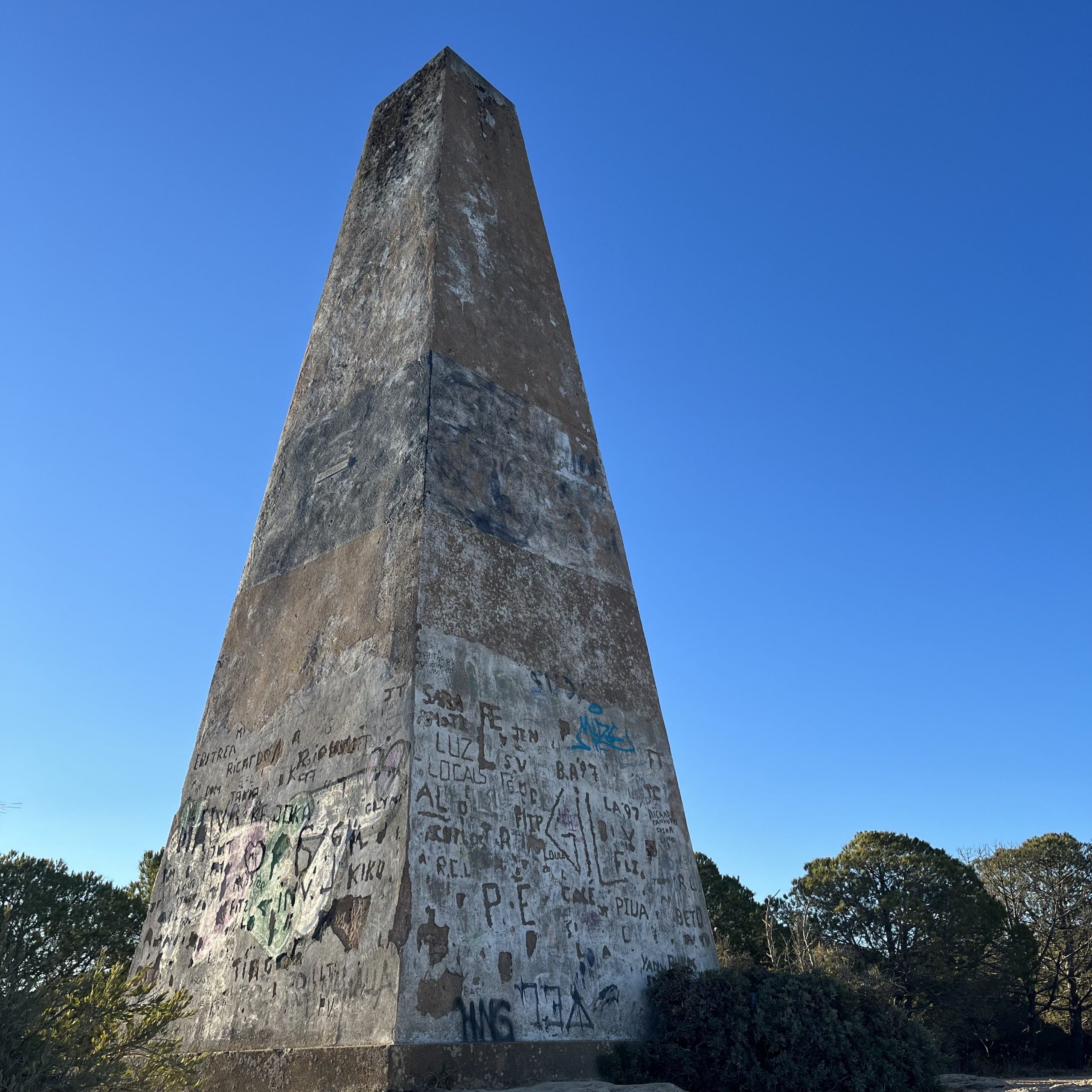 We finished the week with a walk around the clifftop paths close to Burgau, looking down on beautiful beaches and coves that are only accessible by boat. 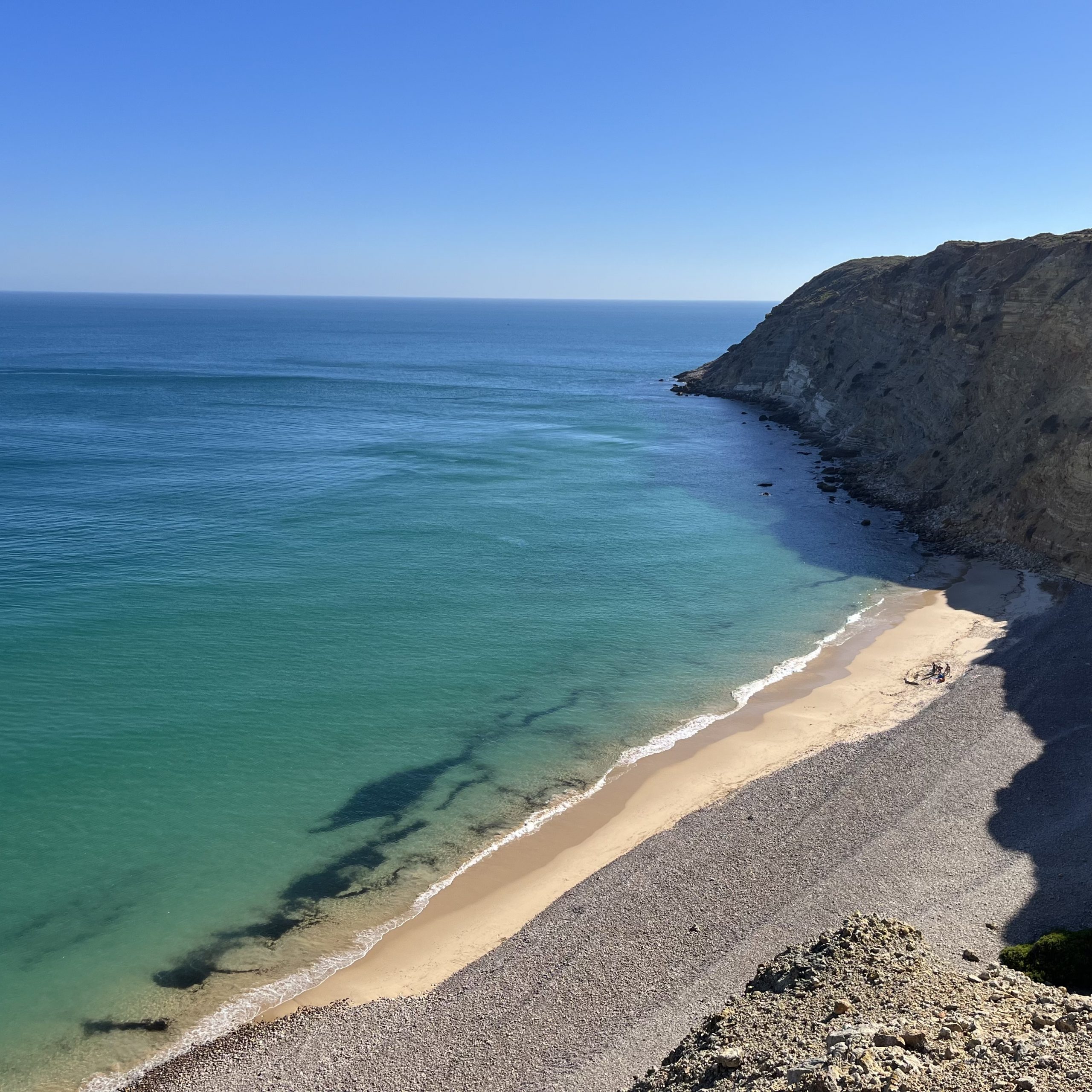 One of many beautiful remote beaches

We had a wonderful time and felt as though we had only just scratched the surface of the places to see. You could easily spend two or three weeks there, exploring the coast, the villages and towns.

England looks quite shocking from the air, more parched than I have ever seen it. It was lovely to see the clouds, with their promise of a little rain. 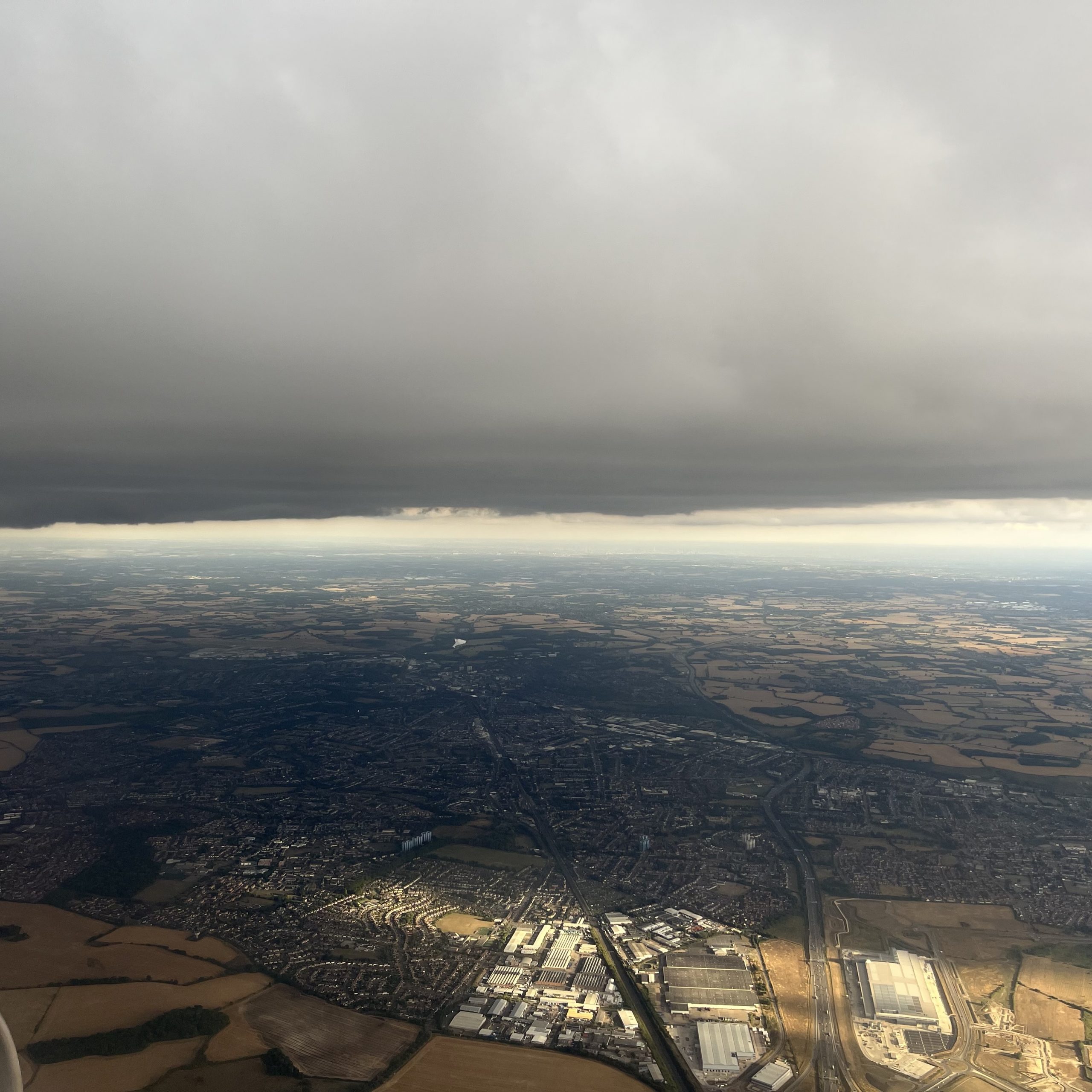 England from the air. Everything still looks parched. 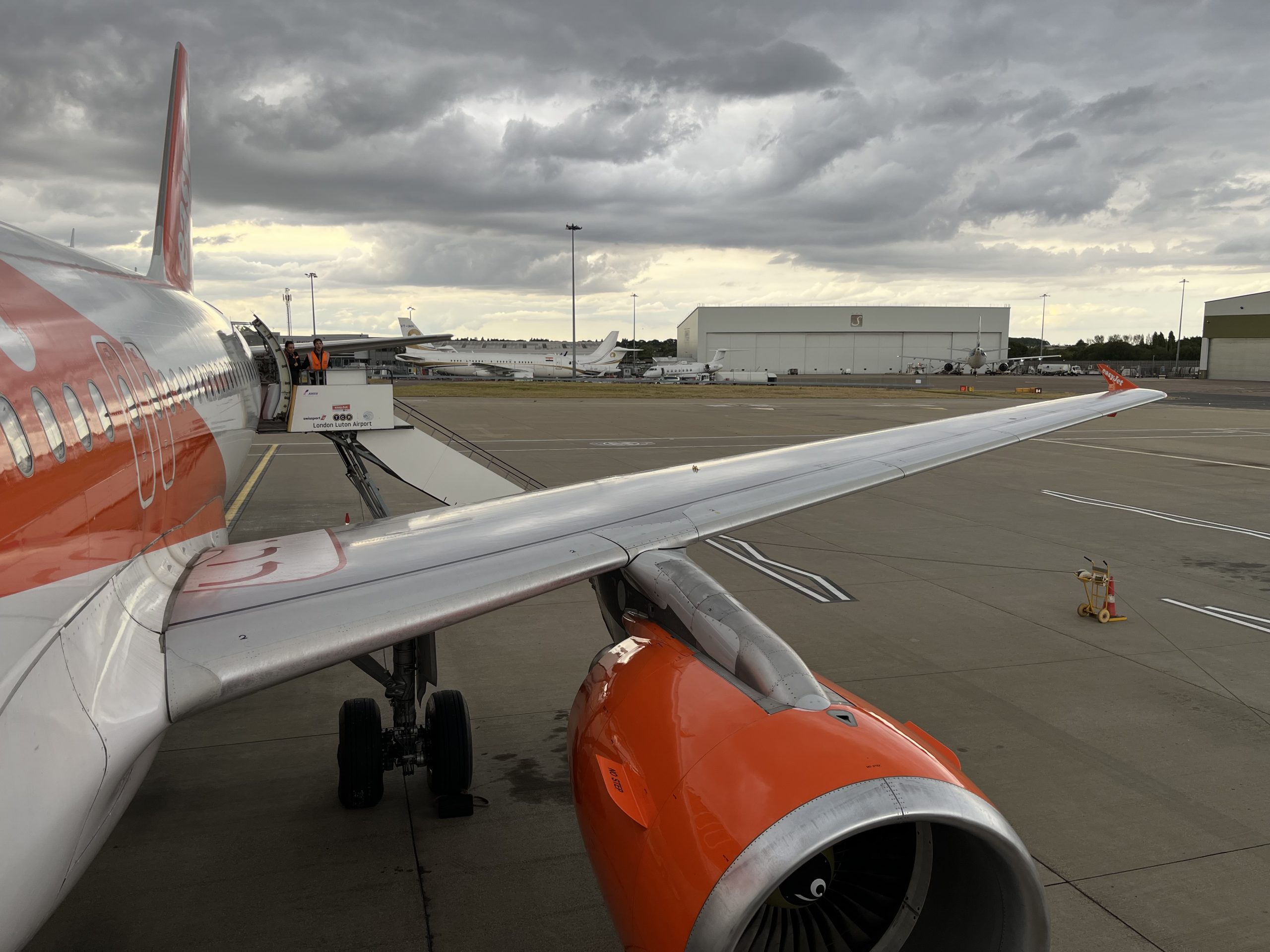 Back at home, under familiar skies

Next week: Back to work with no holidays in sight, and a root canal ahead of the weekend.