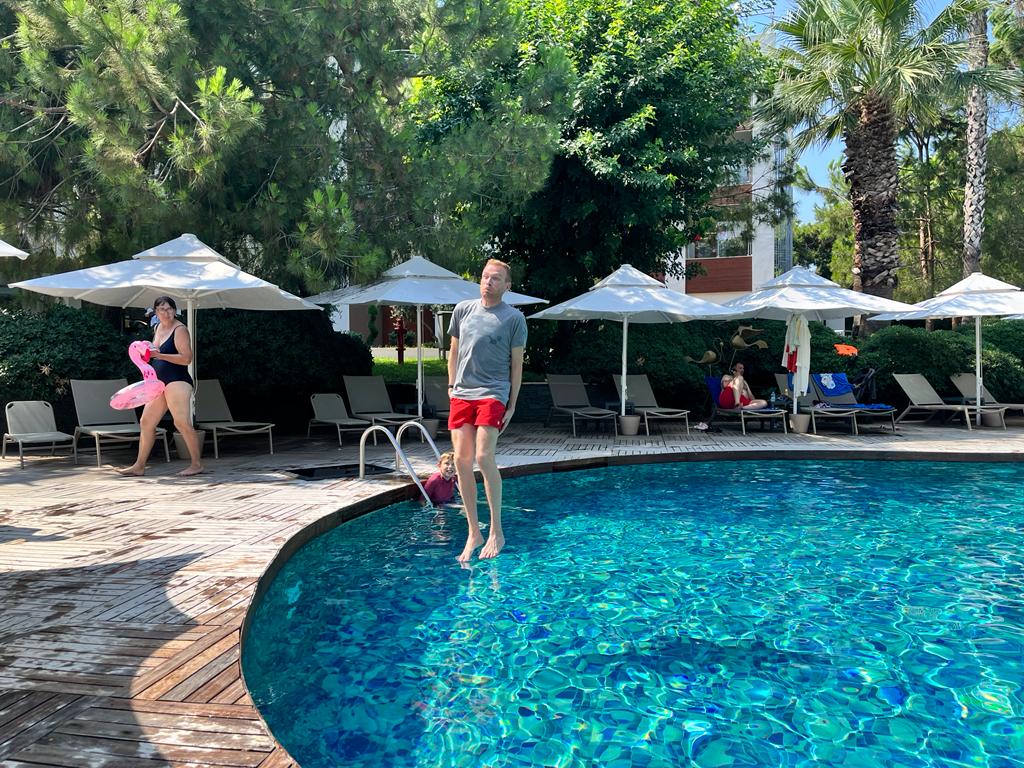 We spent the entire week in Türkiye at the Voyage Sorgun hotel with my parents, my brothers and all of our families for a long-planned and much-delayed group holiday. We hadn’t spent this much time together since we all lived under the same roof in the 1990s. It was wonderful.

The holiday had been cancelled twice before, so we were a bit concerned that the current issues plaguing travellers in the UK would see it get cancelled a third time. We’d booked with EasyJet but ended up on aircraft operated by SmartLynx, who apparently are used to increase capacity in the busier months. The plane and service was sparse, but they did the job. 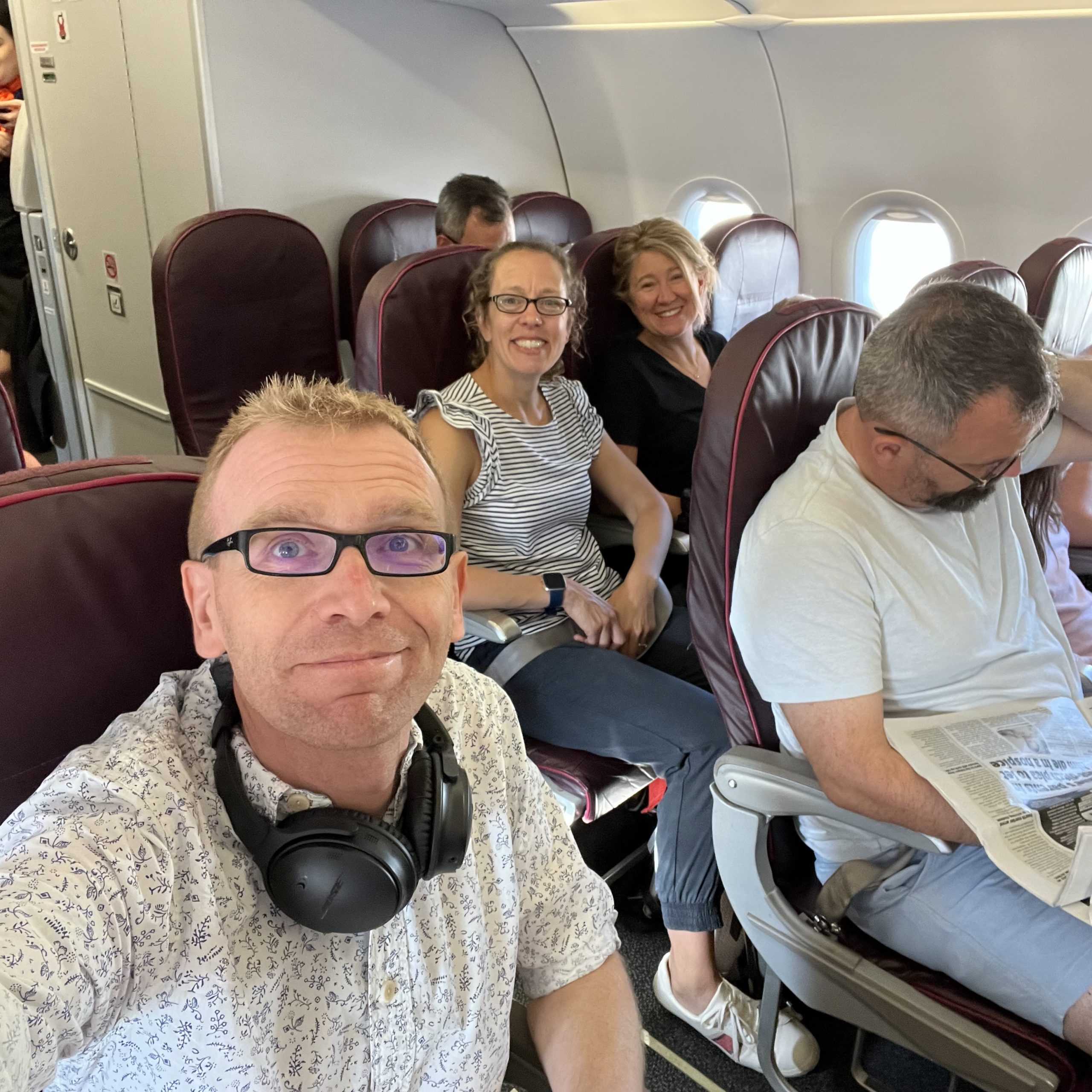 All aboard the SmartLynx

I’ve only stayed at two all-inclusive hotels in the past. The first time I ended up in hospital with pneumonia so couldn’t take advantage of all of the amenities. The second time was lovely, but quite basic. This hotel was incredible, and exceeded all of my expectations. 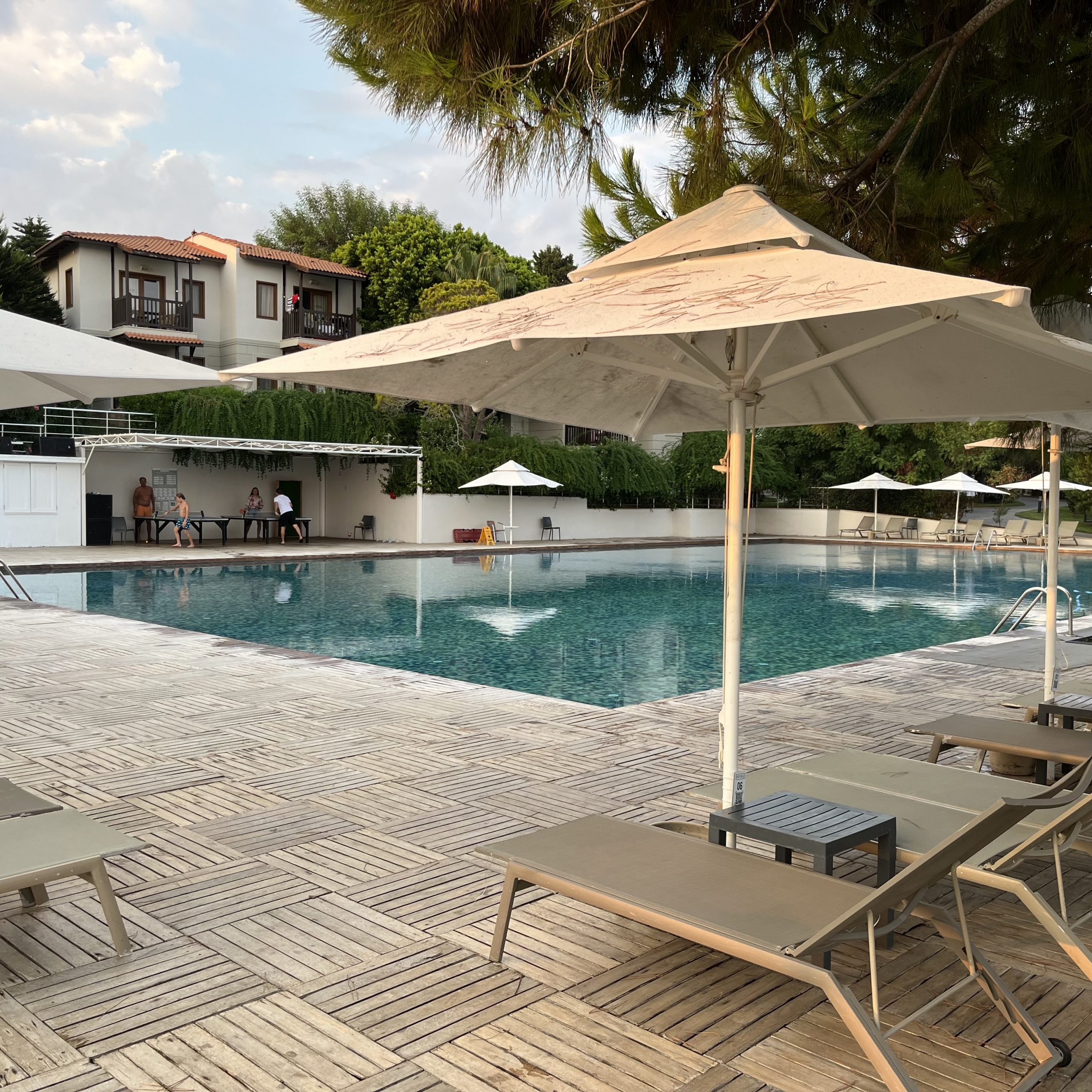 One of the many pools

Upon arrival, we were put into a WhatsApp group with a personal concierge whom we could message and ask for help, for example to make restaurant reservations, book taxis or check whether anyone had handed in something that had been lost. It worked very well. Usually the group is per room, but we managed to get all 14 of us into a single group so that we could all see all of the chat. 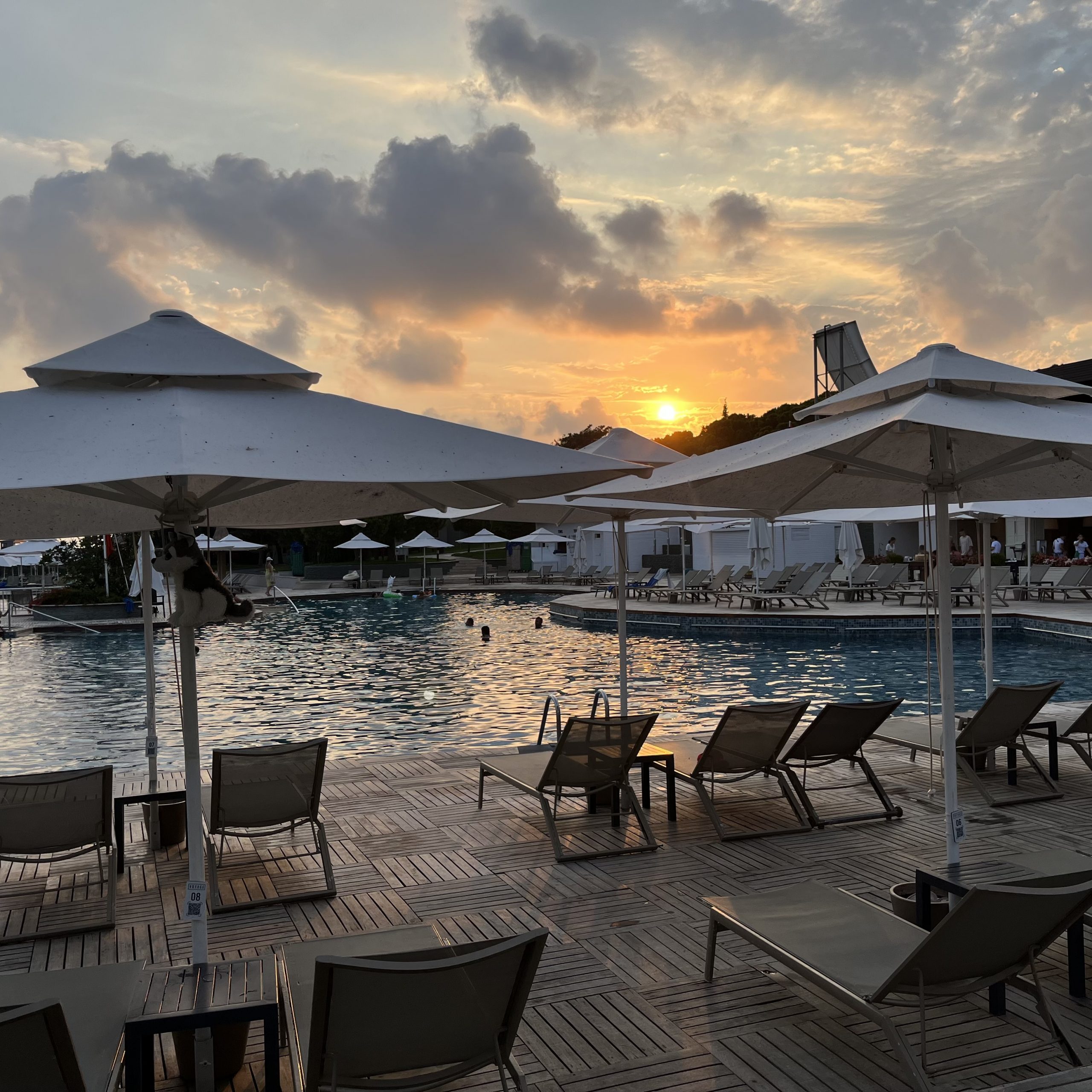 Another pool, at sunset

The hotel’s accommodation was at capacity, but it never felt like it. There were multiple swimming pools to choose from as well as a water park with slides that kept everyone entertained all week. 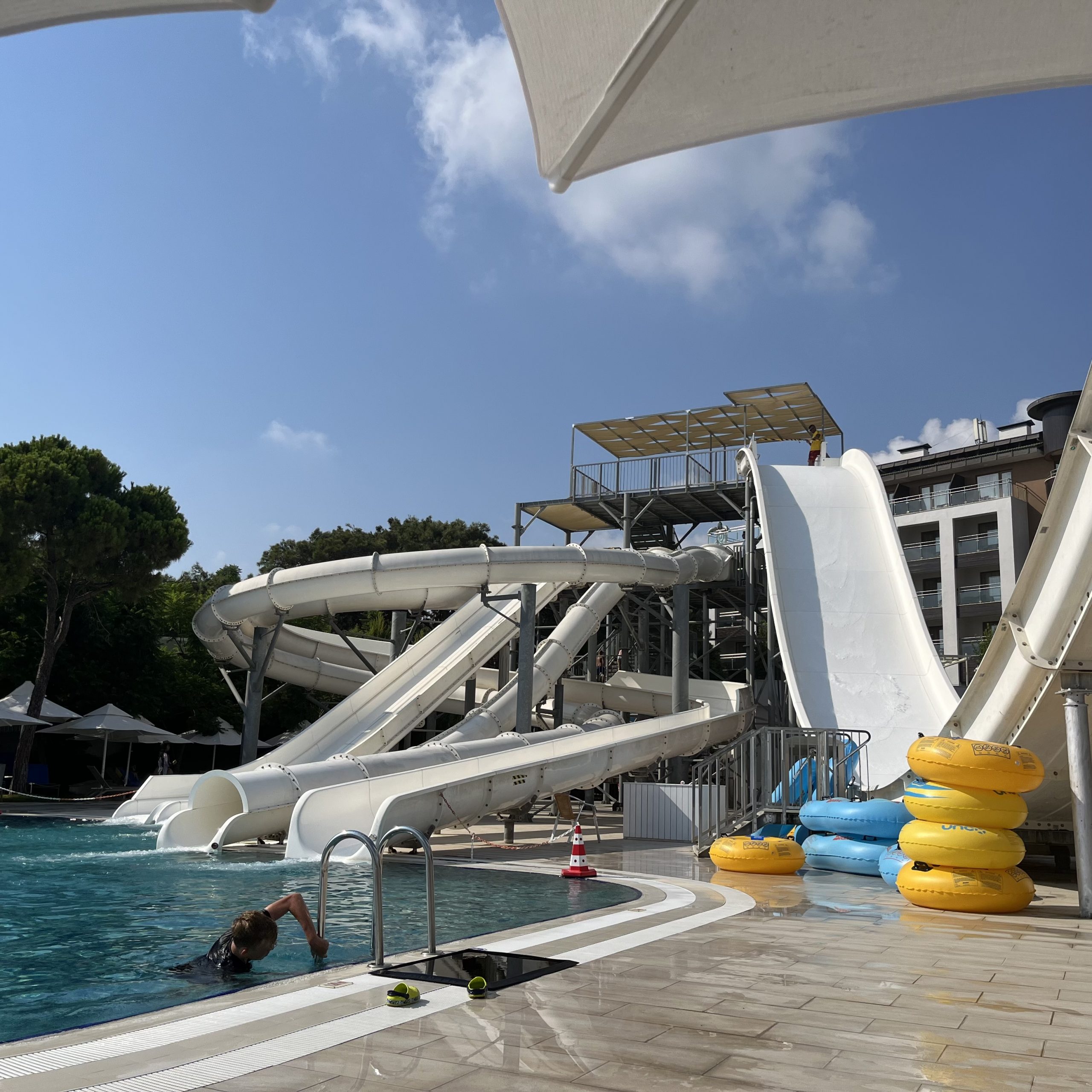 The Aqua Park — so much fun

Bars were everywhere, and you could either go up and order a drink or wait for a couple of minutes for someone to come to wherever you’d pitched your towel. Everything was premium, with no ‘own brand’ or ‘soda gun’ drinks. The bars used heavy glasses and no plastic cups, and I didn’t see one get broken near a swimming pool during the whole week that we were there.

For breakfast, lunch and dinner they had the largest buffet I had ever seen, or you could choose to book and dine every night at a different themed restaurant scattered around the hotel. Ice creams and lollies of all kinds were on tap — you could have some scoops in a cone, or help yourself to a freezer full of well-known branded delights such as Magnums, Cornettos and Calippos. There was even an on-site patisserie and chocolatier where you could eat as many of the confections as you desired. It felt terribly indulgent, taking whatever food I wanted as I wandered around listening to political podcasts that are focused on the cost of living crisis, knowing that inflation in Türkiye had nearly hit 80%. It was awful to see some people pile their plates high at the buffet, nibble a little of it at their table and then wander off, leaving most of it untouched. Sadly, at the end of each session, everything that wouldn’t keep was thrown in the bin. I have no idea about the logistics of distributing the food to staff or people in the local area, but it did seem like such a ridiculous waste. 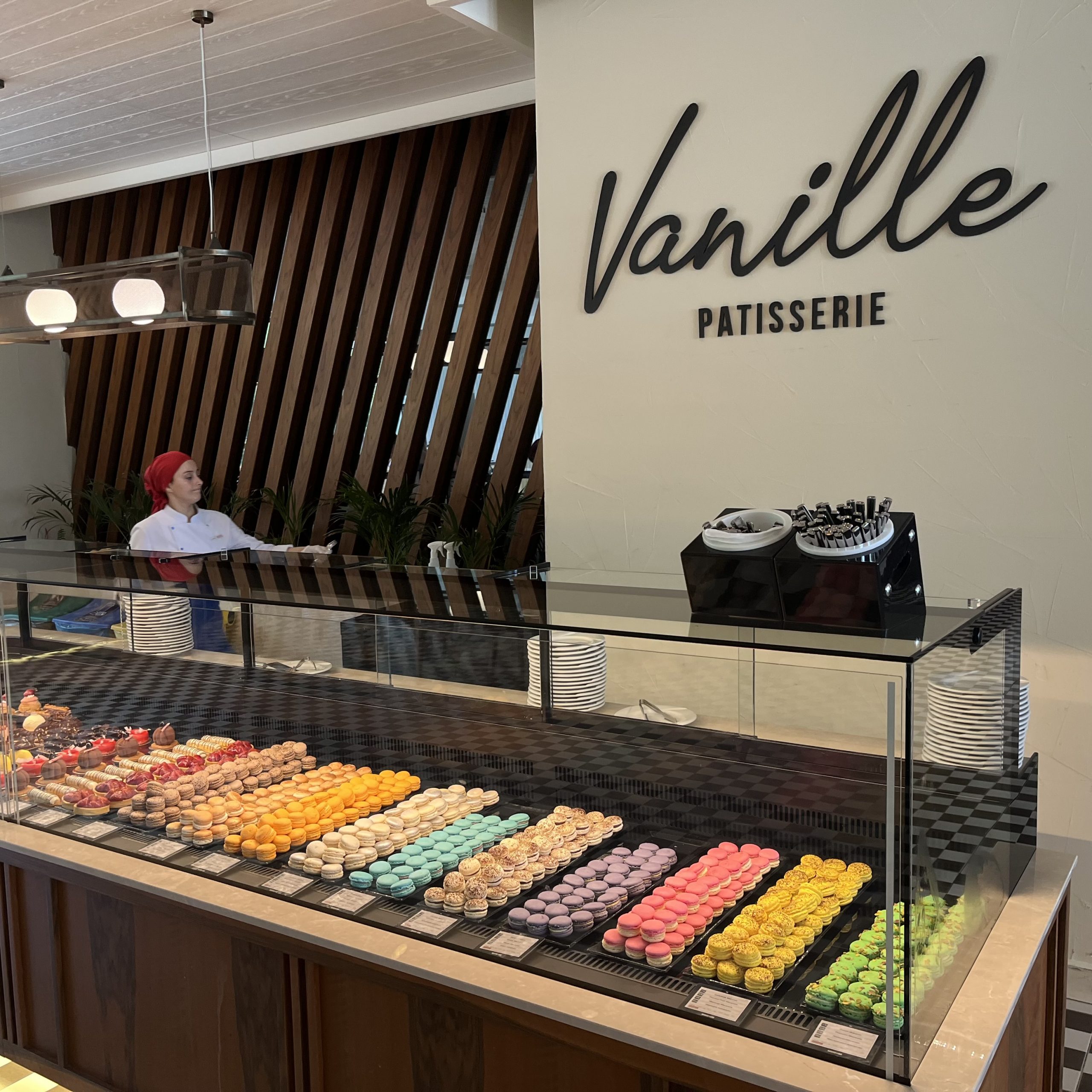 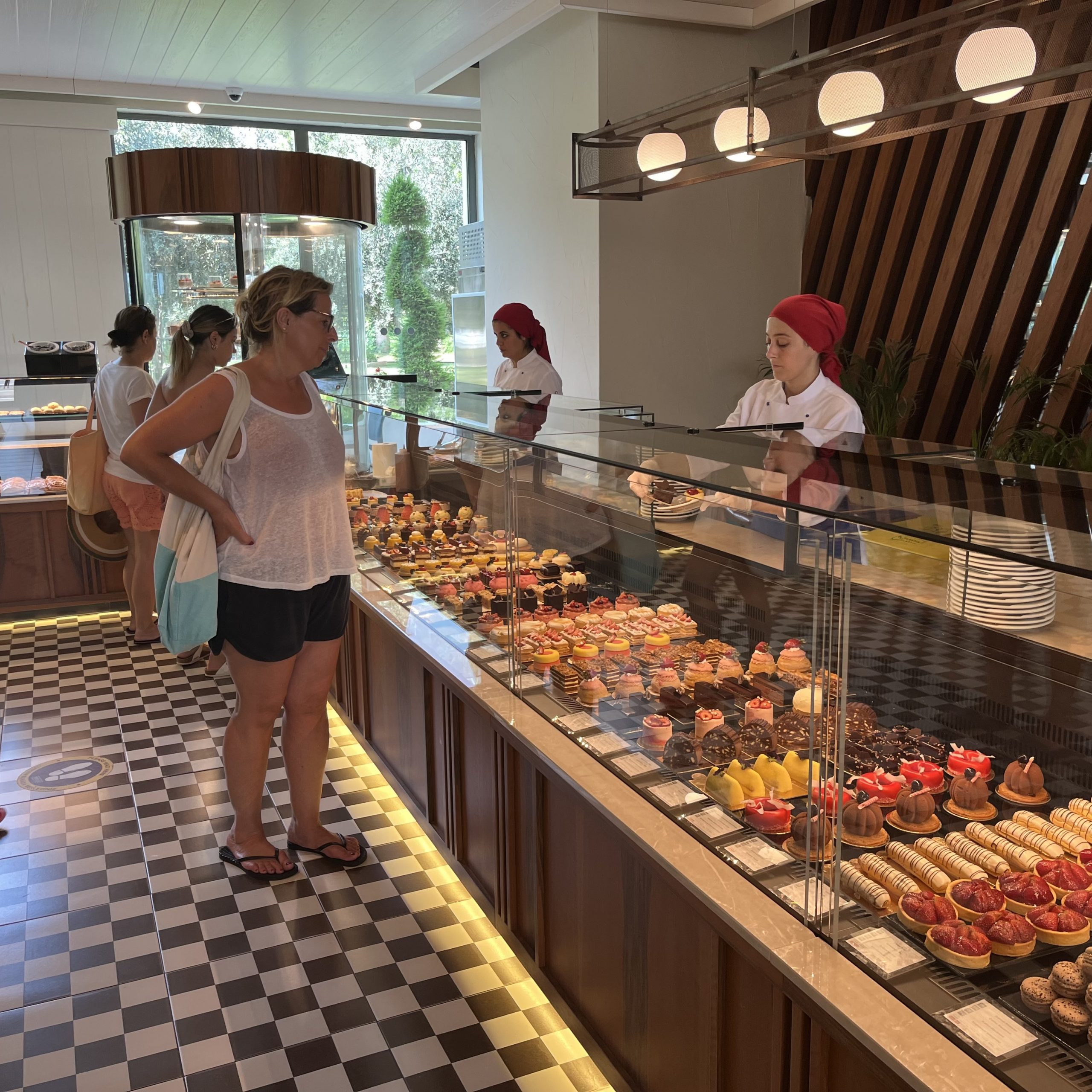 Whatever you wanted, you could have it 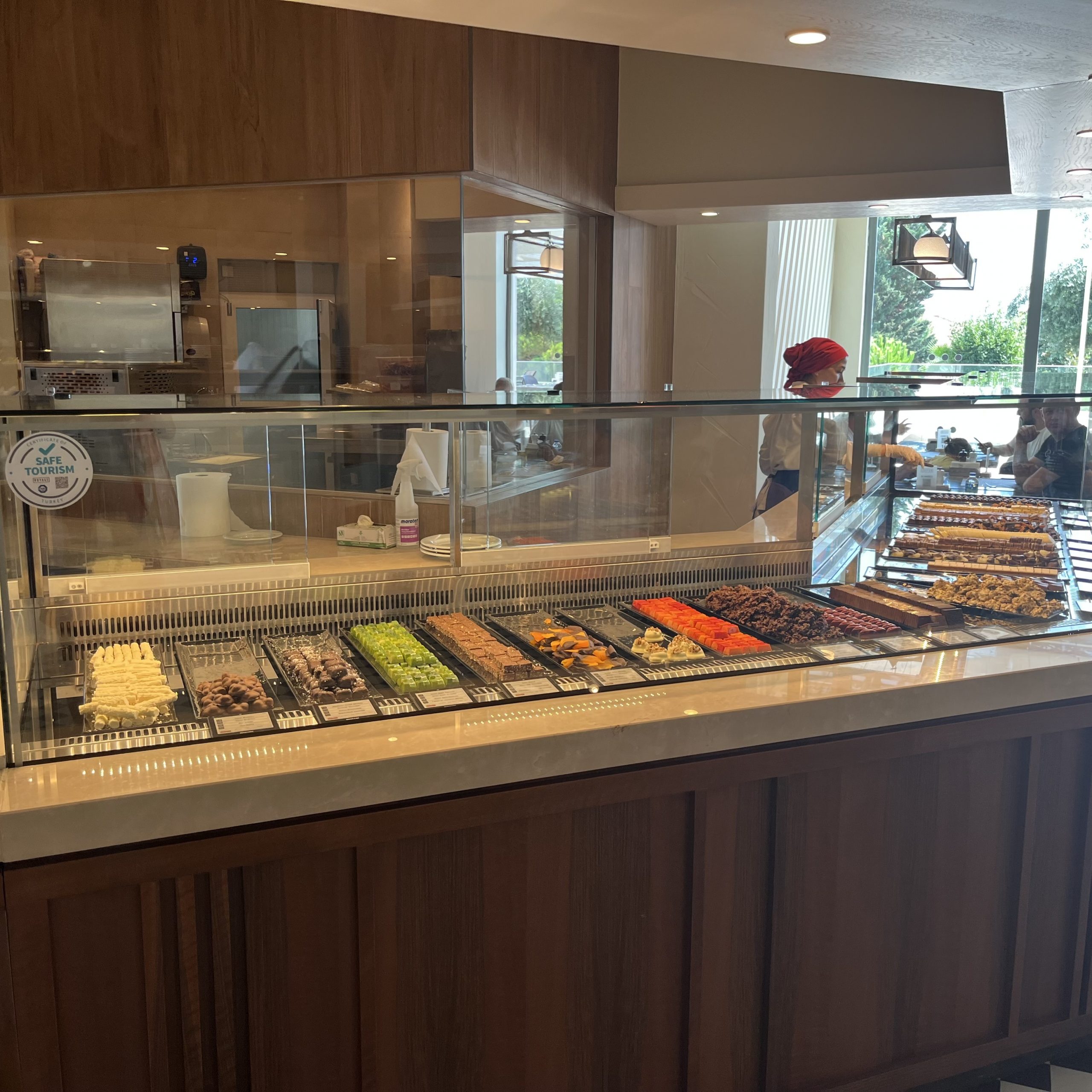 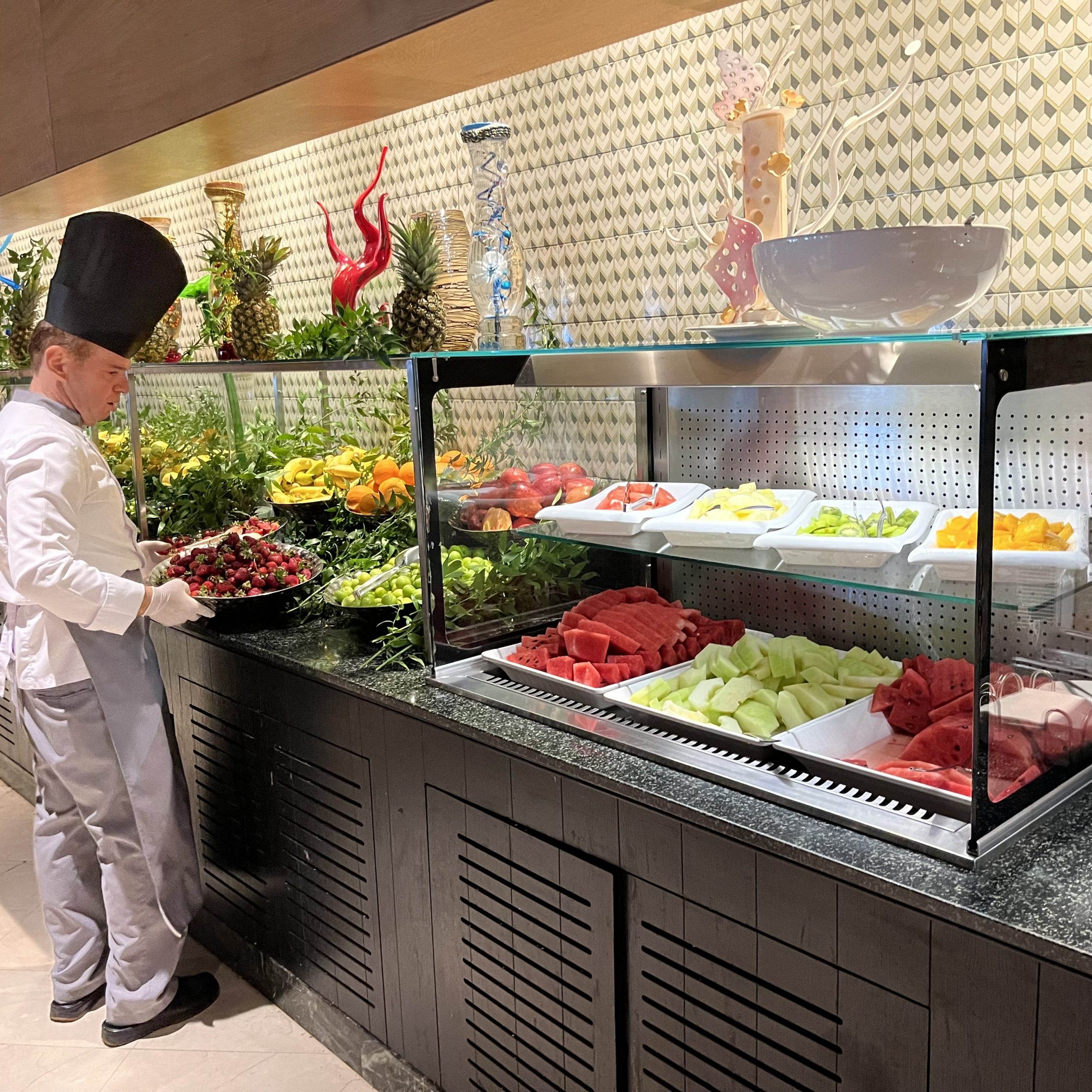 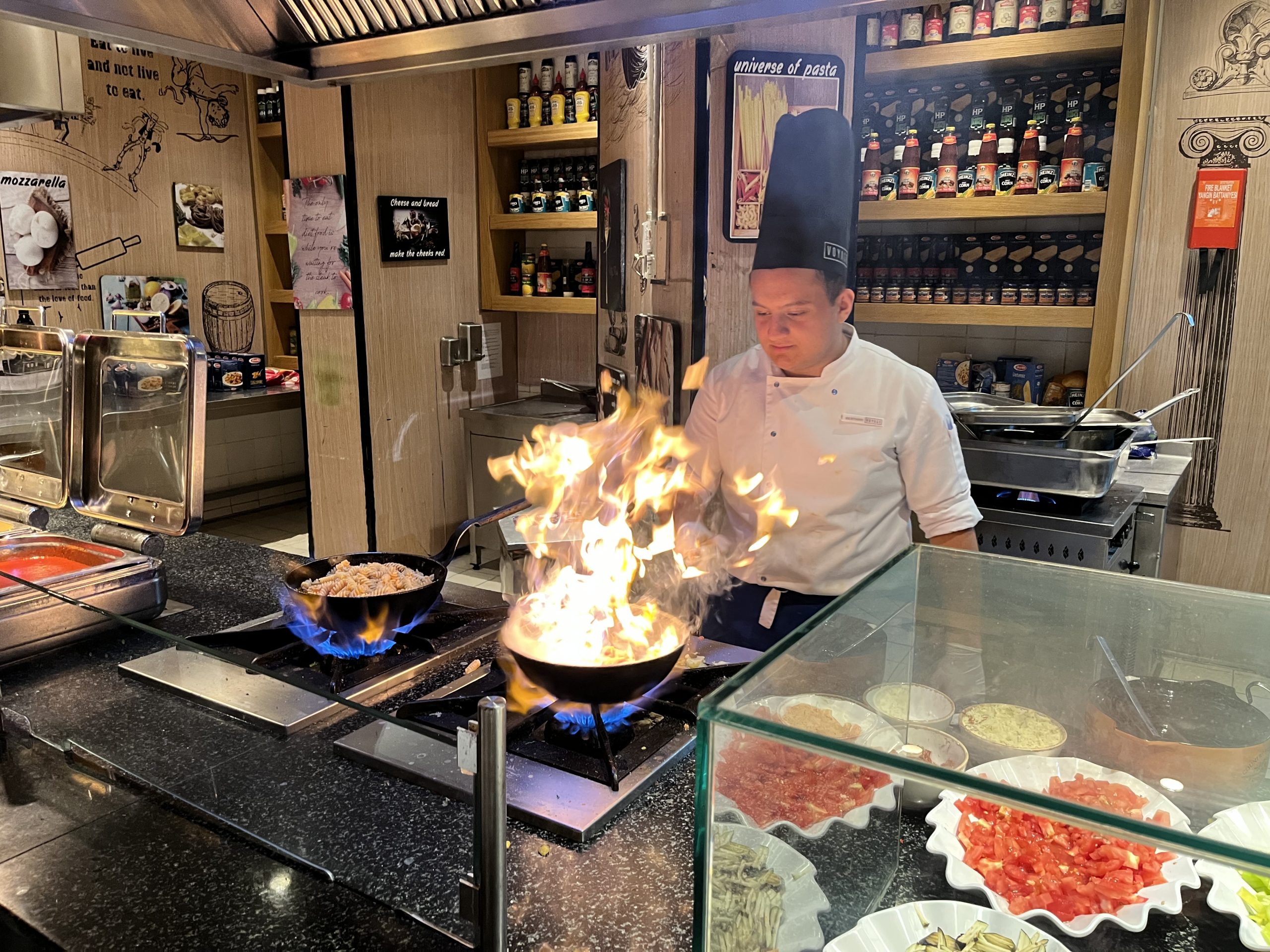 Cooking a pasta dish in the buffet

Every evening there was a different show at an open-air auditorium. The quality of the entertainment was very high, with all kinds of acrobatics and dancing. We even had a motorcycle show inside a subtly-named ’globe of death’: 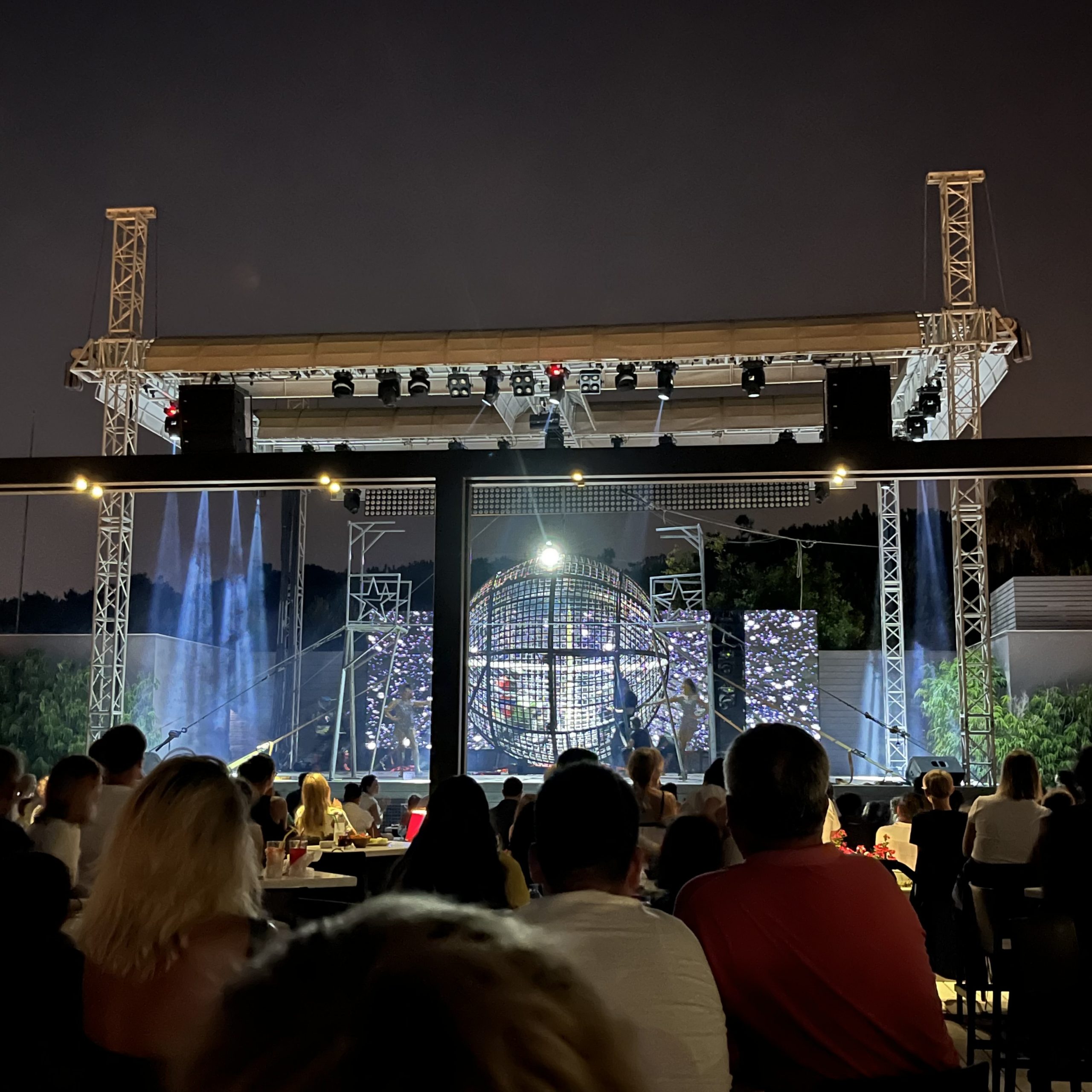 The globe of death

After the entertainment the outdoor area turned into a thumping loud Eurodisco, with three quarters of the guests calling it a night within five minutes of it starting.

On Thursday afternoon the hotel put on a ‘pool party’ with inflatables, disco music and dancing penguins in one of their shallower pools. The highlight of this was the ‘hoverboard’, powered by the engine of a jet ski. I’d never seen this before and it was a lot of fun to watch, despite the outdated ending where Hoverboard Guy was joined by two bikini-clad women shaking their butts as he zoomed them around the pool.

I tried speaking a little Turkish while I was there and got around with a few basic phrases:

I never got over the look of surprise from staff when I used a phrase or two. I’m sure my pronunciation was absolutely awful and they were being very kind to me. 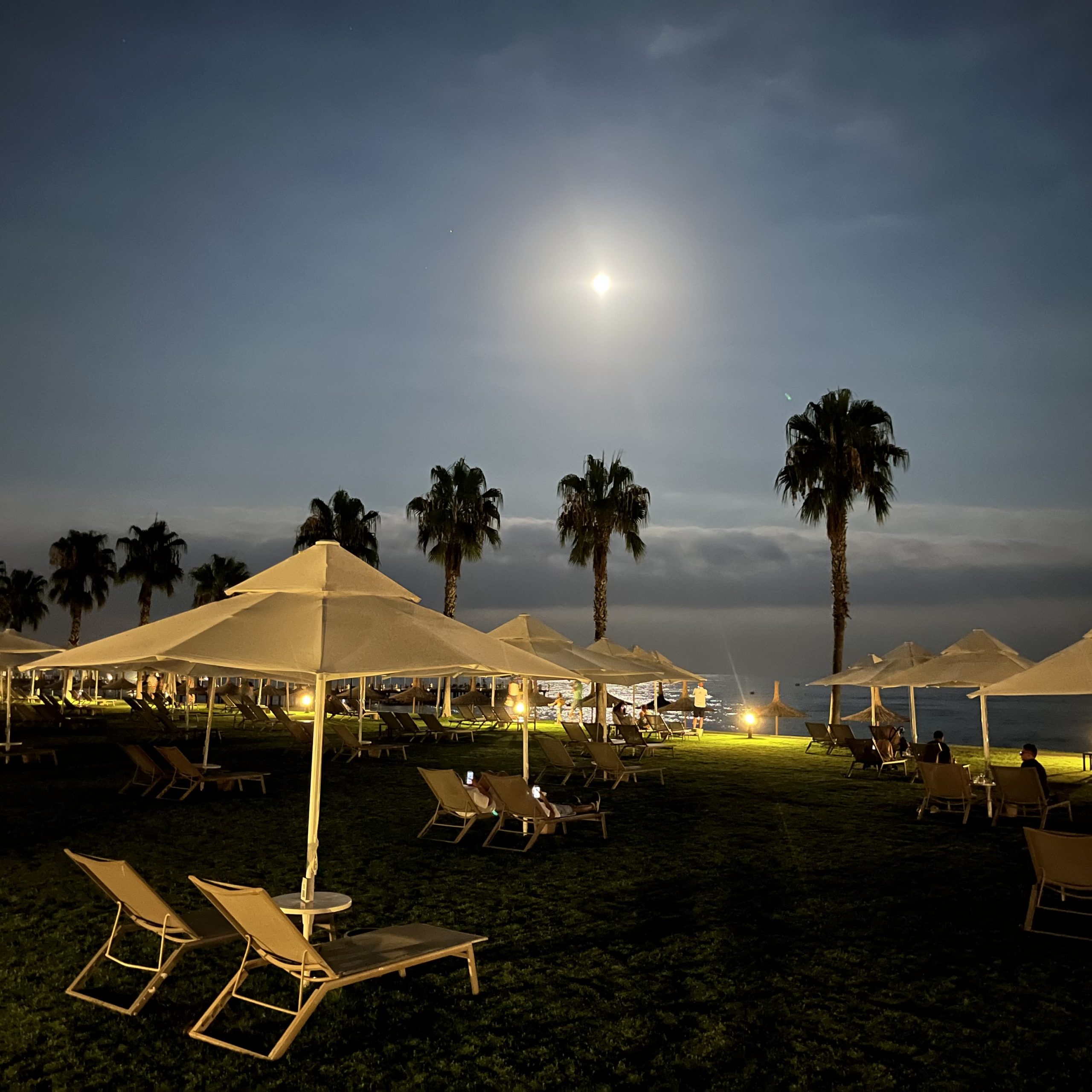 QR codes dominated every sun umbrella and restaurant table, allowing you to order whatever you want and have it delivered to you. This was mostly great, but in the restaurants it felt like a shame to whip out a phone in order to see the menu.

We only had one disappointing meal during the whole week, at the Italian-themed restaurant. Everywhere else was delicious. The best food was at the Turkish restaurant, but everyone had the most fun at the Greek place, with diners shaking tambourines and dancing to a live band. 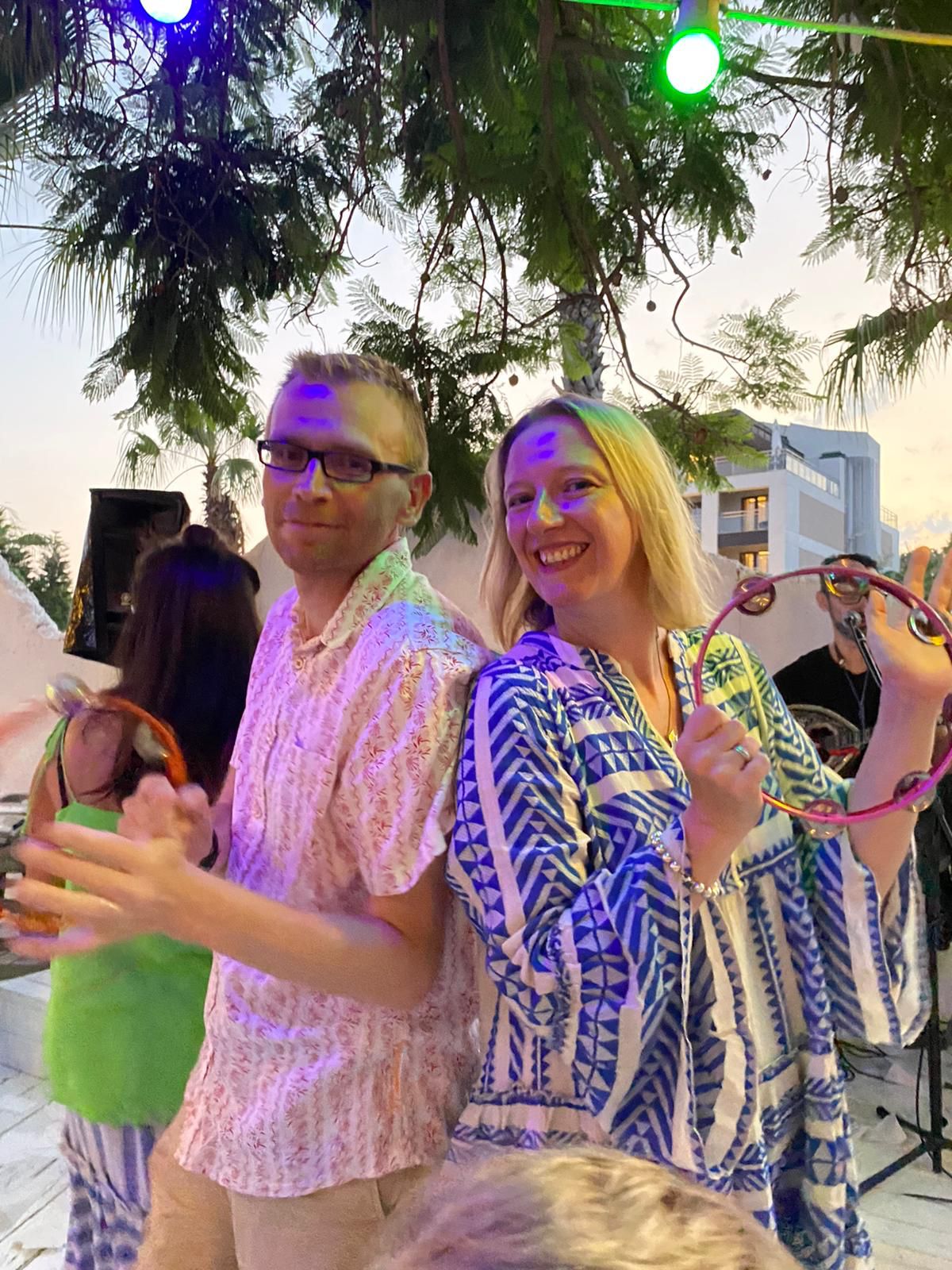 Getting the party started

The hotel was home to a number of feral cats and kittens that enjoyed being petted and being fed scraps of food by the guests. I wasn’t so keen, particularly when one of them jumped up onto a sun lounger with me. One evening, a cat decided to vomit all over the floor underneath my son’s seat as he ate his dinner. Diners at the Greek restaurant had to chase this hungry cat away who was looking longingly at their food: 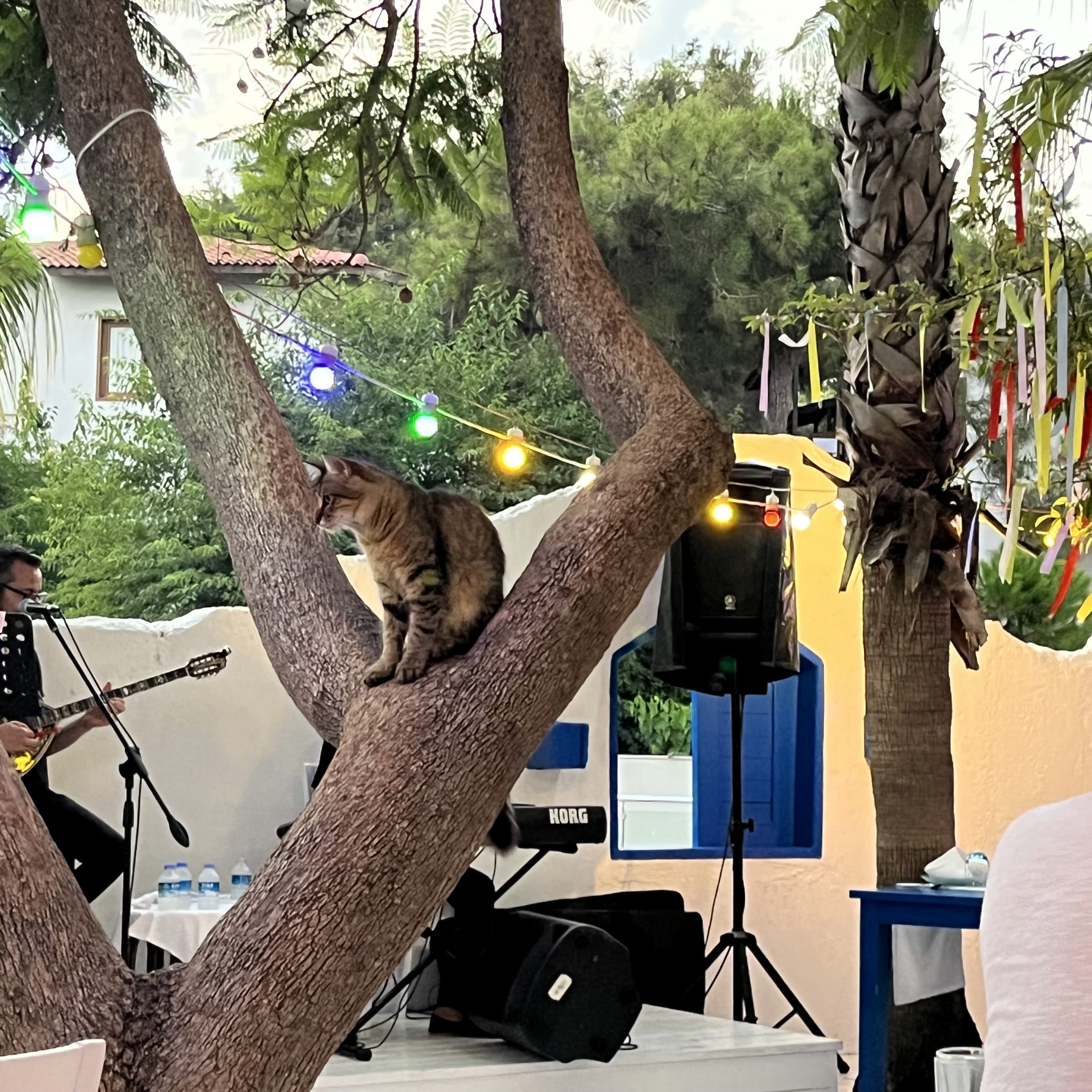 Although it was hot, on a few mornings I made it out of the complex to go for a run. There was a wooded area that we could circumnavigate in an 8km loop, which was perfect.

It was a little terrifying to pass by some big dogs, not knowing whether they would suddenly start chasing after us. We slowed a couple of times to try and discourage them; they never got close as they seemed more interested in the passing vehicles than our legs:

One morning we took taxis to the nearby ancient town of Side. The archeological remains are stunning. Unfortunately it was brutally hot and everyone was feeling it after just a few minutes of walking, so they sought respite in the multitude of fake clothing stores nearby. 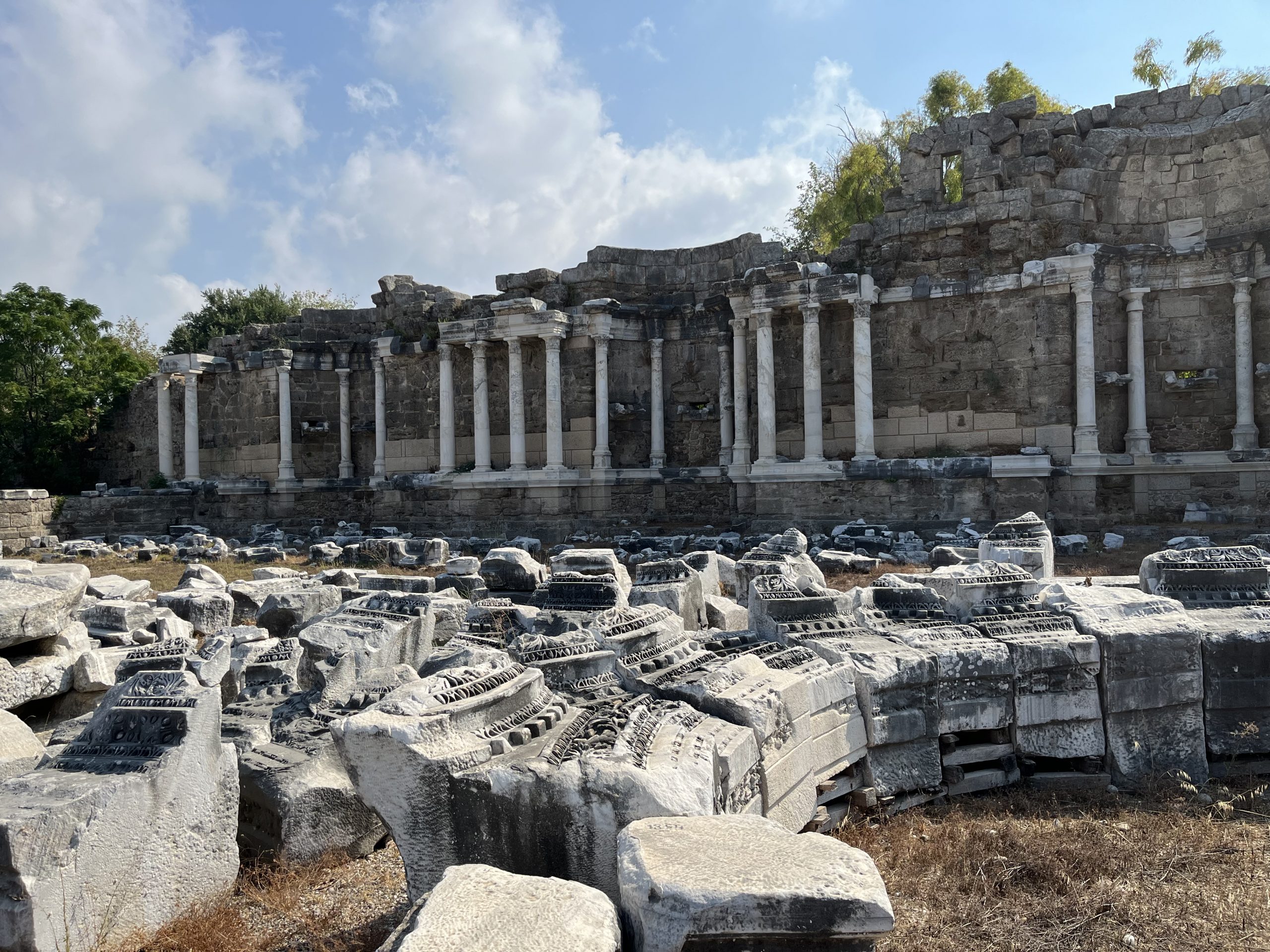 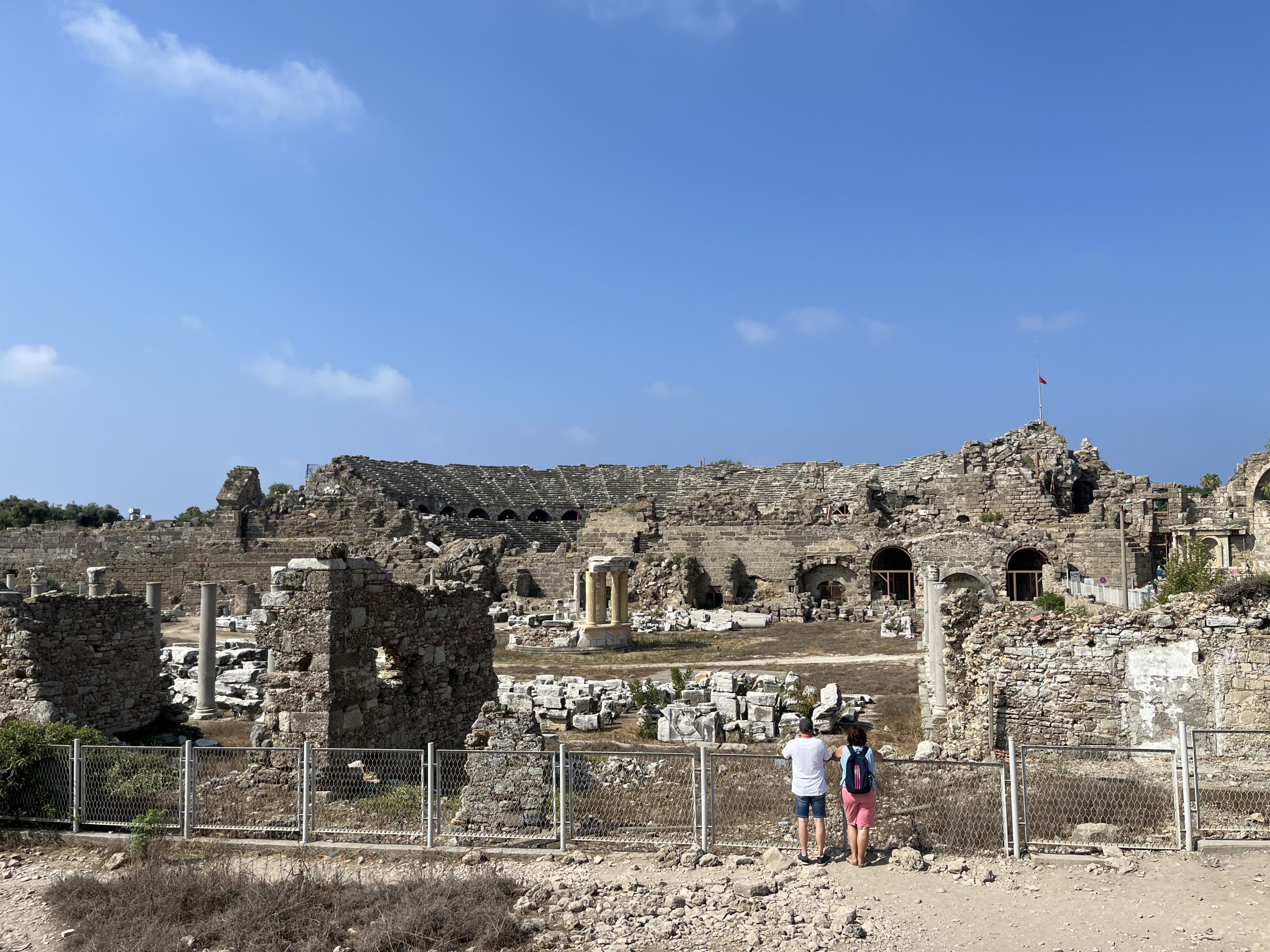 The ancient theatre at Side 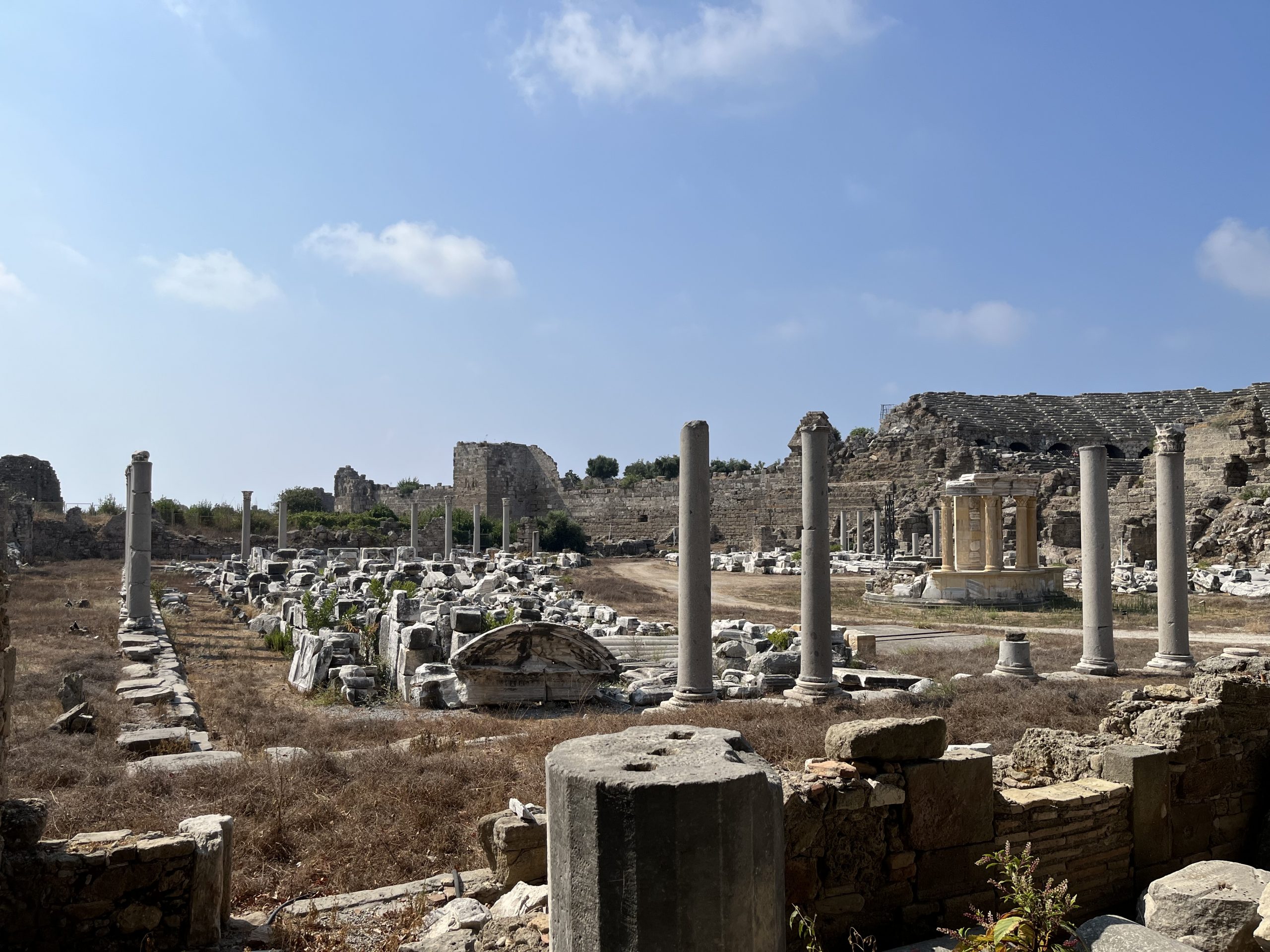 More ruins at Side

The hotel extended out into the sea via a couple of piers that were covered in sun beds. Next to these was a company selling various water sport experiences. The children (and some of the adults) enjoyed a couple of banana boat rides and a parasailing trip. 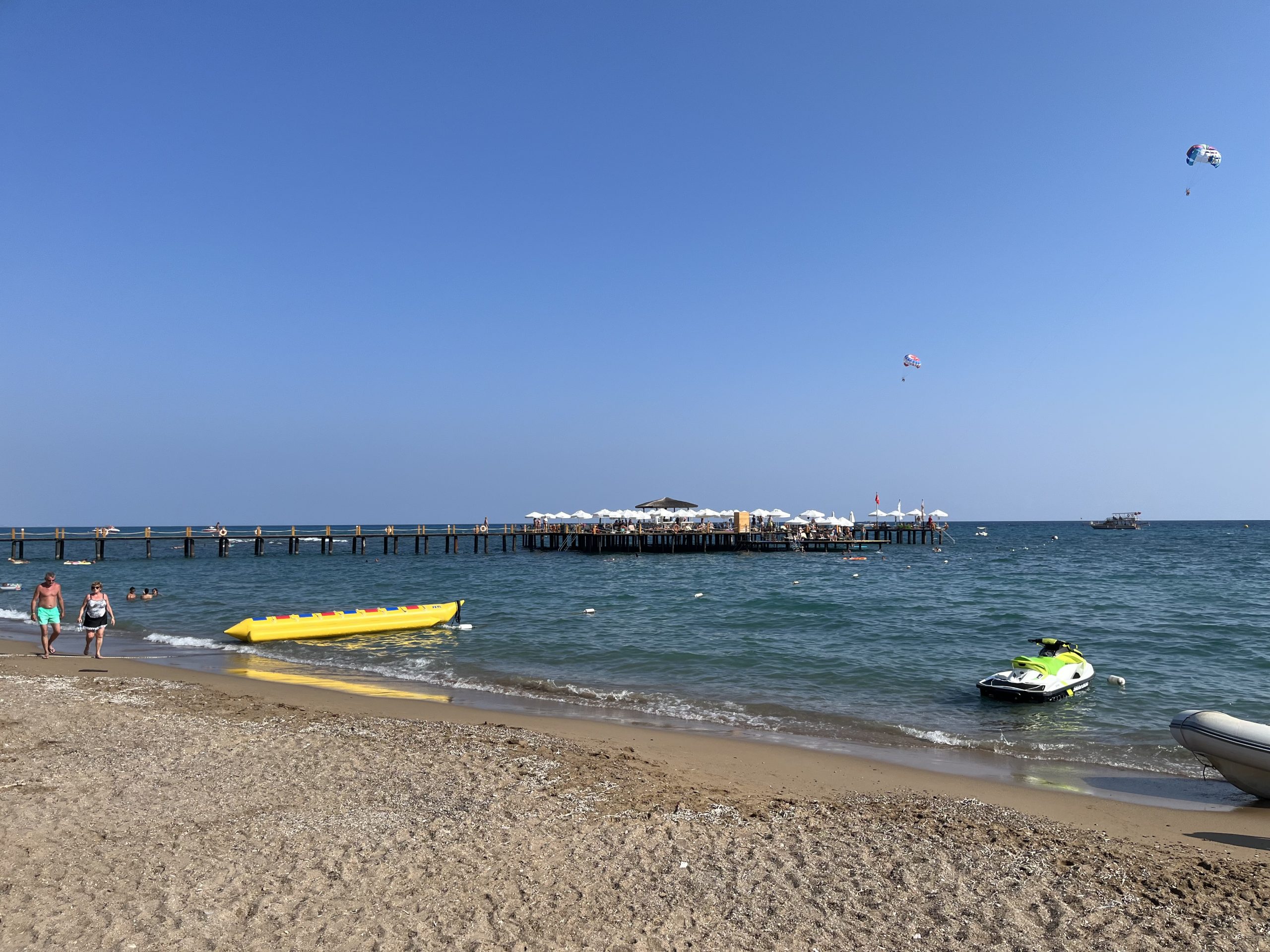 We had such a wonderful time on our holiday. It’s a cliche, but the time goes so fast and the whole trip felt like it was over as soon as it began. I loved spending time with my nephews and niece, and felt as though I got to know them properly for the first time as we had lots of opportunities to sit together and chat. I didn’t realise quite how fabulous they are. 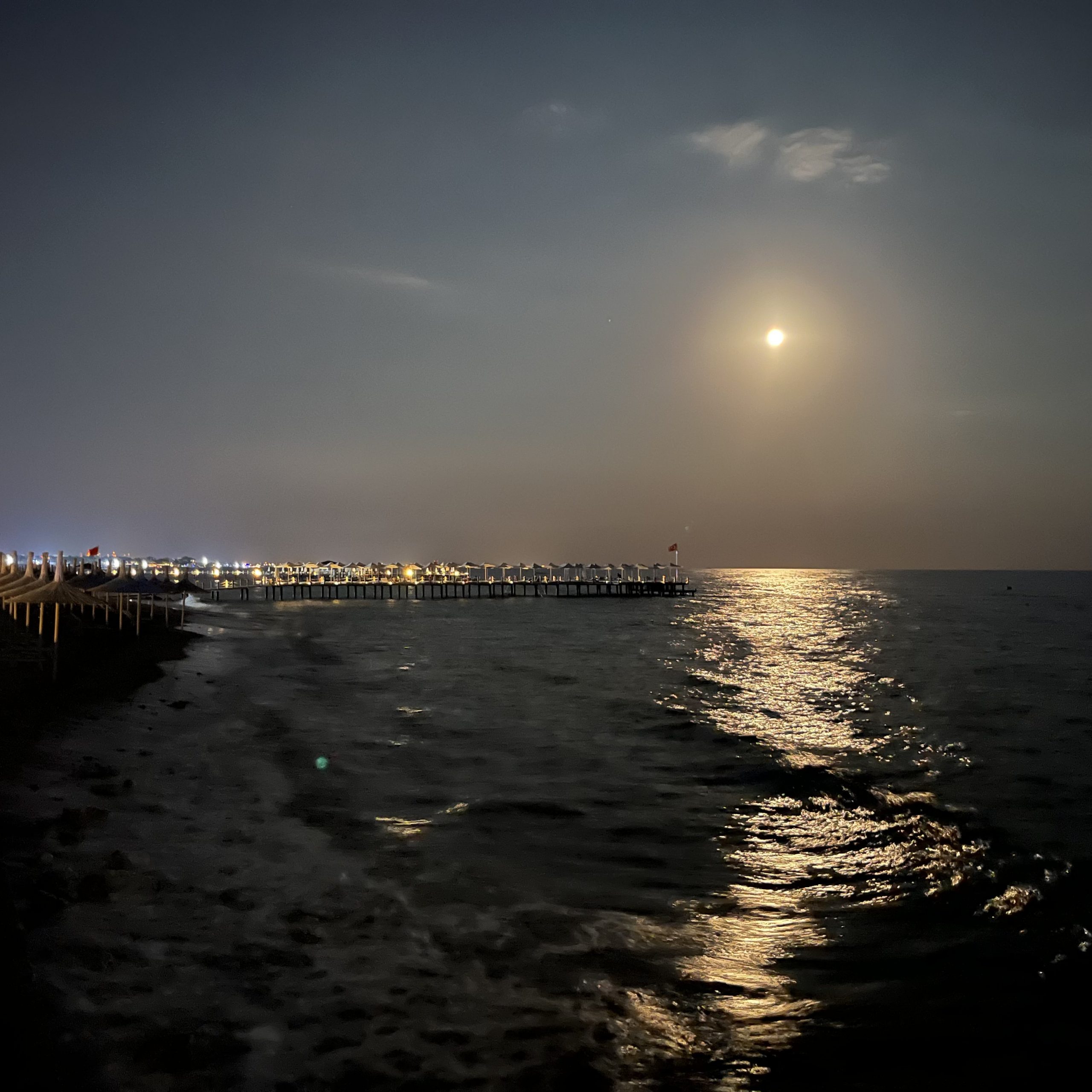 The journey home was long. Our flight was delayed by an hour, most of which we spent standing at an inadequately-sized departure gate. We then had to wait at the baggage carousel for 90 minutes before our suitcases started to appear. All part of the fun of travelling this year. COVID-19 seems to be a distant memory for most people; there were a few masks here and there around the hotel, but probably 98% of people didn’t wear them.

Sunday was spent putting things away and getting ready for a week of work. I seem to have developed a toothache which is stopping me from sleeping, so that’s top of my list of things to get sorted out on Monday.

Next week: Back to work for a week, and trying to fix my toothache.