My last trip to New York coincided with the 77th session of the United Nations General Assembly. The city was bonkers, with police and diplomatic staff everywhere you looked and hotel rooms going for double their usual price. It’s always a strange feeling to be so physically close to a place that the whole world is paying attention to in that moment, knowing that it is just a few steps away.

A couple of weeks later, I found myself heading back to New York. I decided to book myself onto a tour of the building. My office is in Midtown Manhattan and the UN is only a few blocks east, so it seemed like the perfect opportunity. An adult ticket costs $22 plus admin and booking fees, which seemed reasonable. As they only operate on weekdays during normal working hours, I chose the last one of the week: Friday at 4:45pm.

I didn’t check the map in any detail and figured I would work out where to go when I got there. I meandered my way over to the East River on a gorgeously sunny afternoon.

I’d been intrigued by the building ever since I saw it in Hitchcock’s North By Northwest, filmed in 1959. To me it had always looked both beautiful and functional. 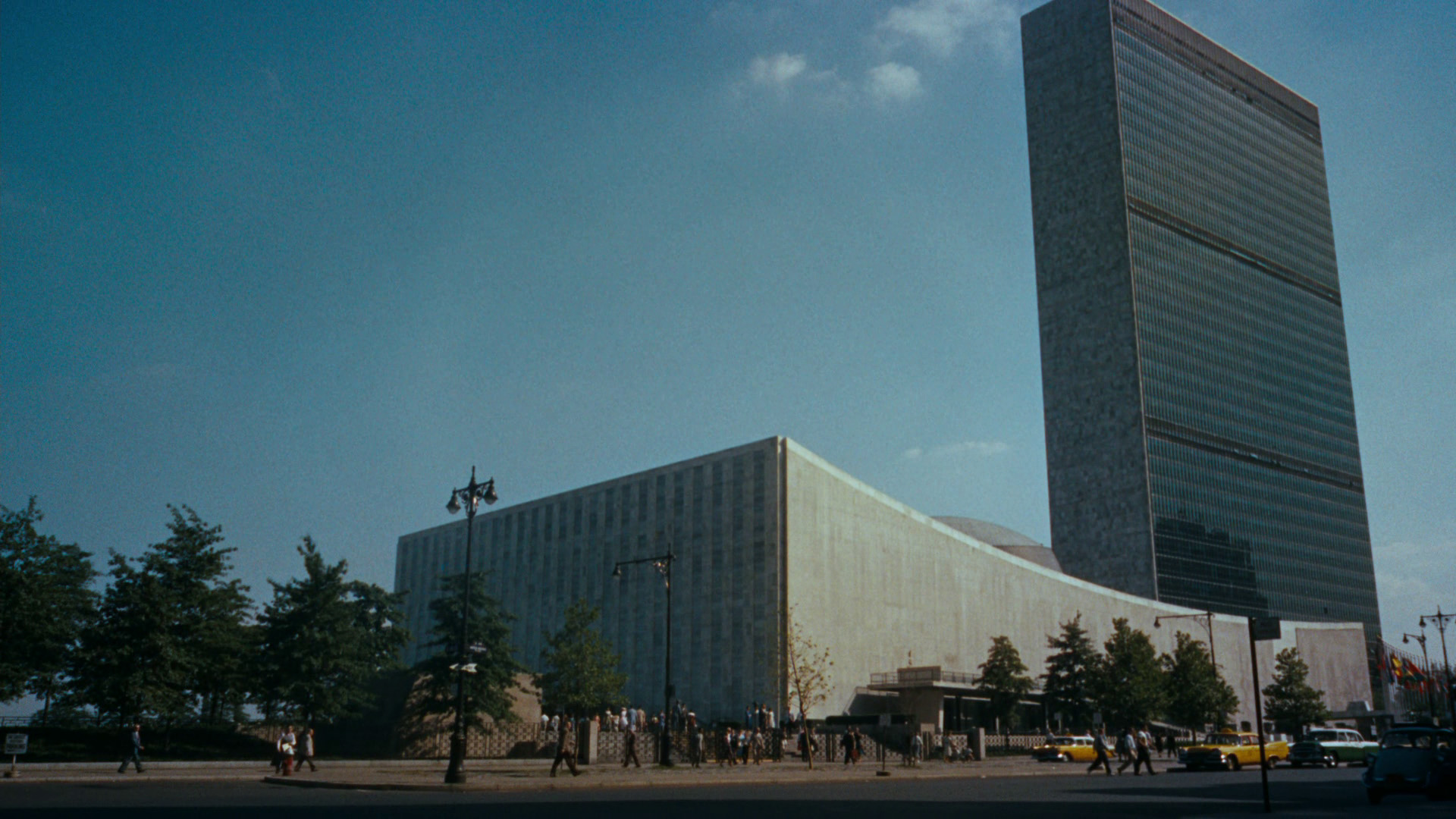 From the trailer to North By Northwest (1959)

Old films amuse me when they show how innocent the times were. In the movie, Cary Grant arrives by taxi and bolts up the stairs to the entrance. These days the premises is heavily militarised, with fences and guards separating the plaza from the world outside.

A friendly guard at the main entrance told me that the the Visitor Centre is located right across the street. I crossed over to find a grumpy security guard, who checked my ticket at the door and gruffly told me where to go. As well as my ticket, they needed to see my COVID-19 vaccination records and proof of ID. They then took a quick photo, which was printed out a sticky badge that I would wear for the duration of the trip. I now had to go back over the street again. 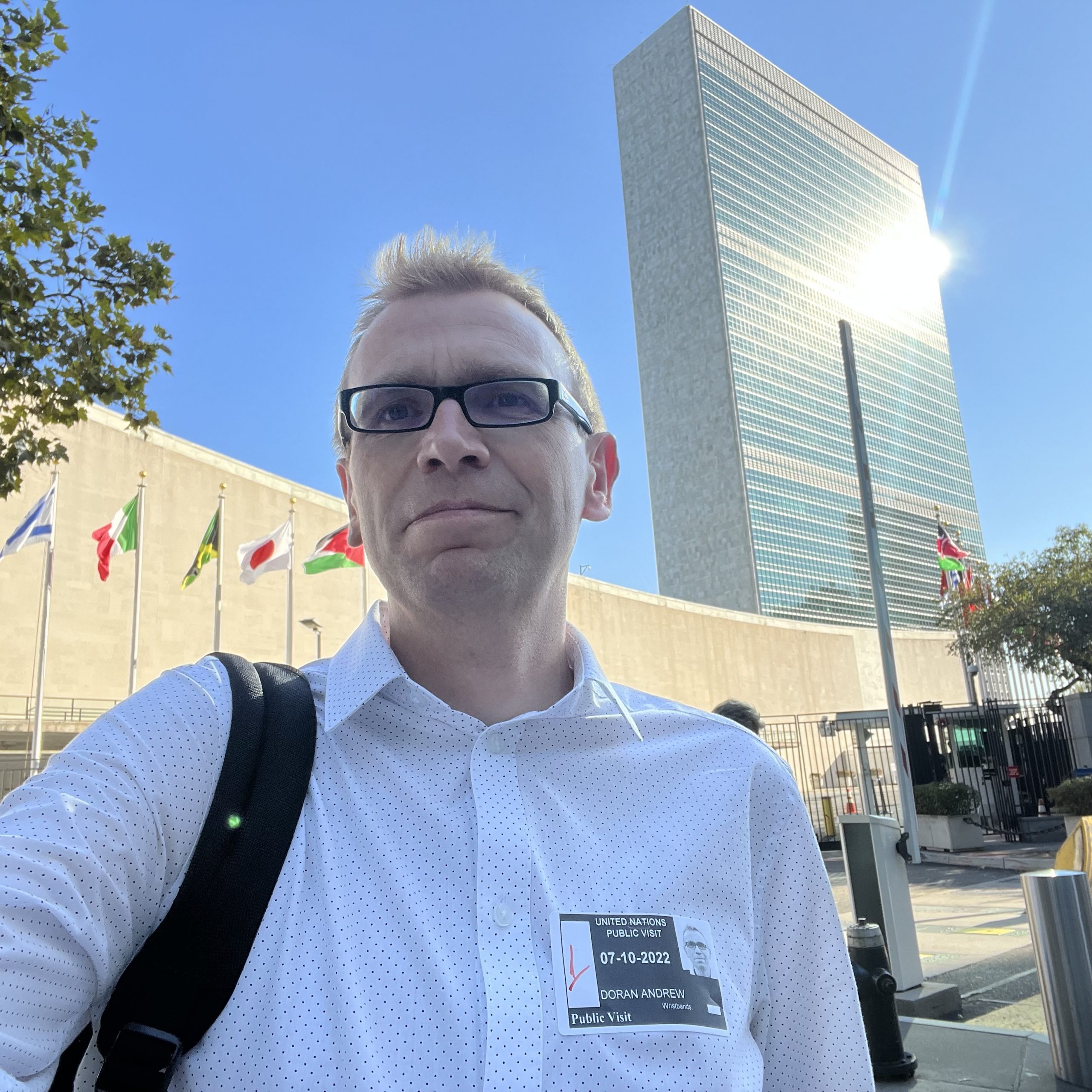 Once I got into the main entrance I had to navigate some airport security-style checks, with my bags being x-rayed and my boding being put through a metal detector. The whole place was quiet, with only two of us in the security zone. I’m guessing that the facility is equipped to deal with a busy day when the General Assembly is in session, and is a little overkill for a random late Friday afternoon. A couple of minutes later, I was in. 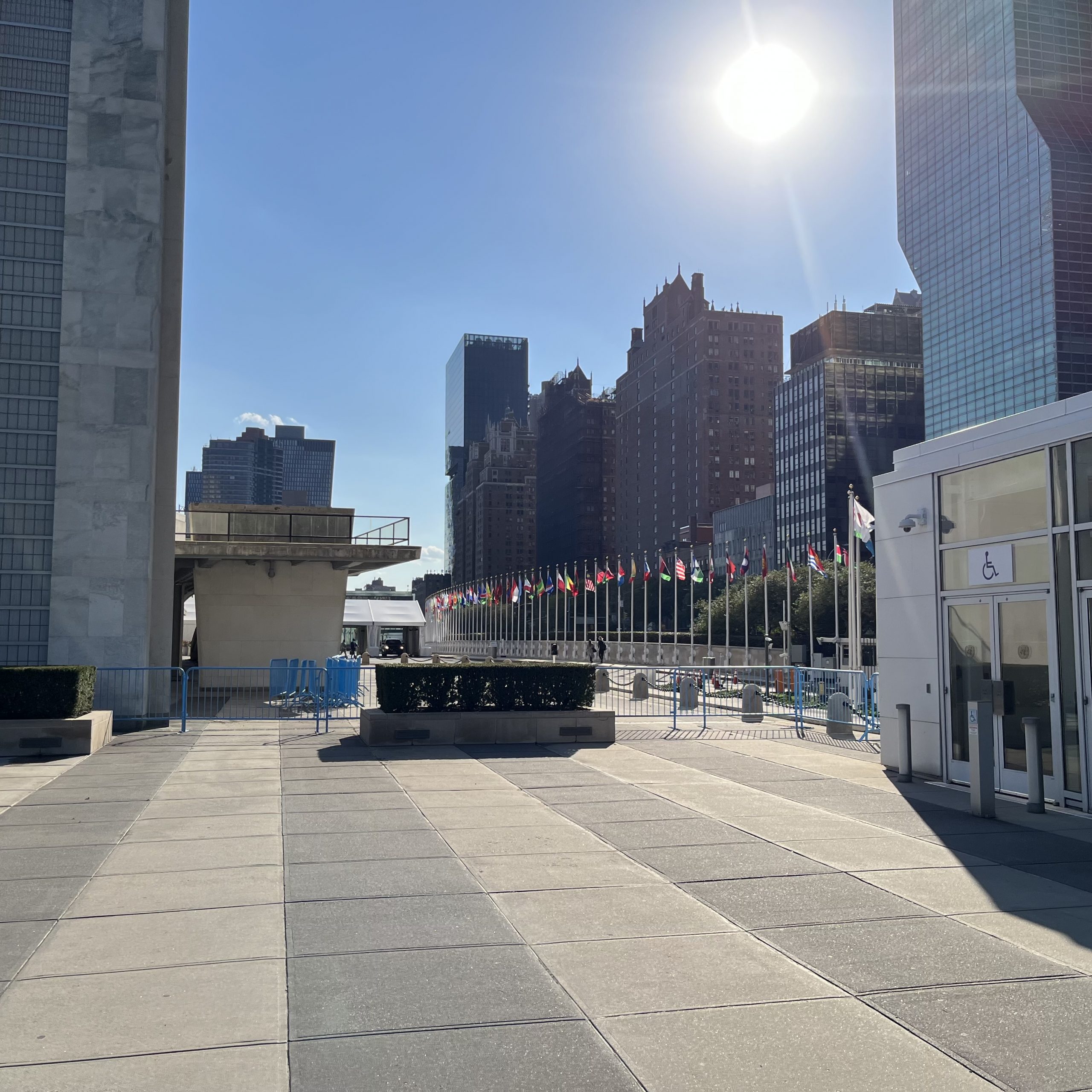 Looking back at the flags after getting through security

Throughout the UN there are numerous artworks, gifts from individuals and nations to the organisation. As you wander to the terrace in front of the entrance you are immediately in front of two iconic pieces: Sphere Within a Sphere by Arnaldo Pomodoro, symbolising “the emergence of a new world from the old”, and Non-Violence by Carl Frederk Reutersward, inspired by the murder of John Lennon. Someone was recording a speech or piece of dialogue in front of Non-Violence, filmed by someone on their smartphone. 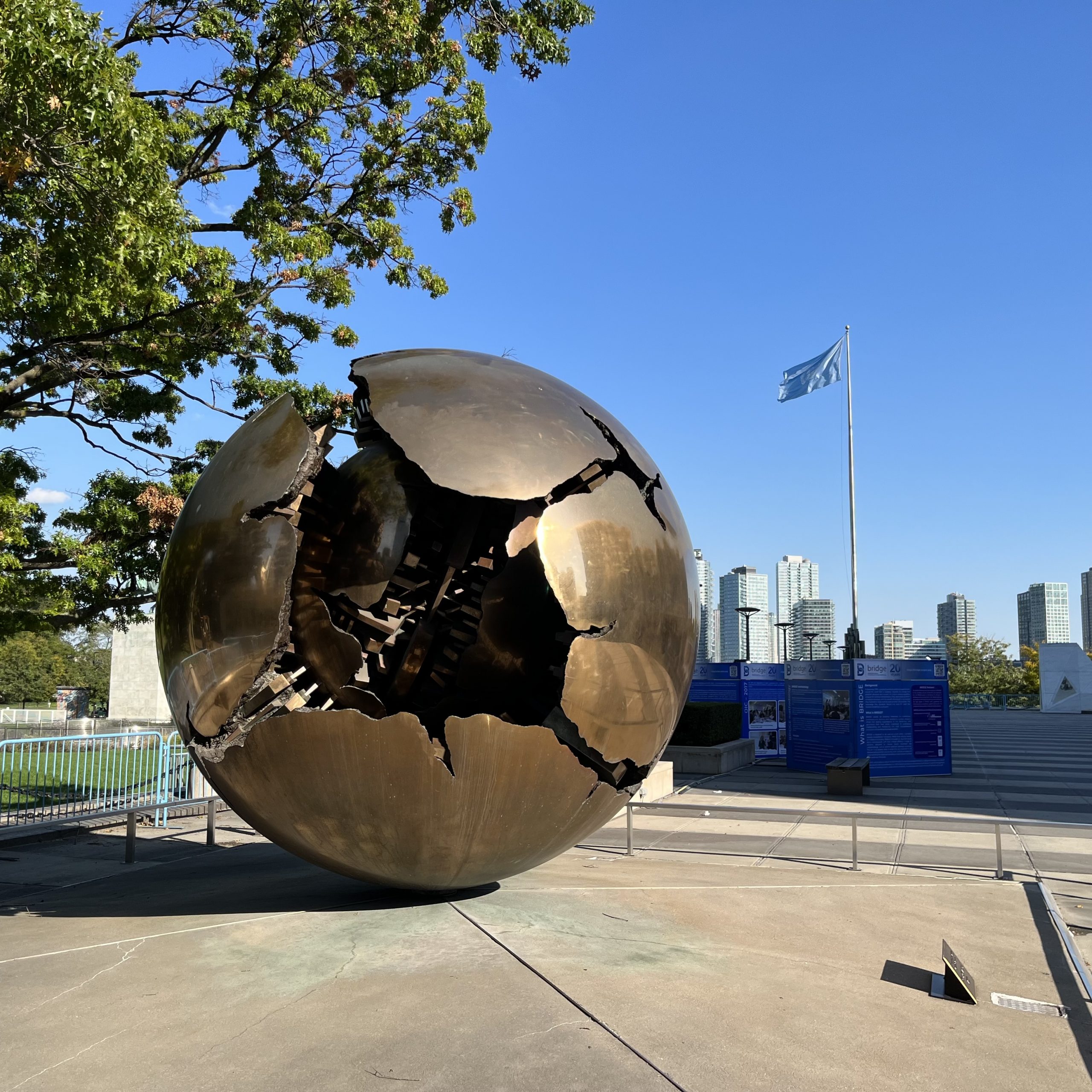 Sphere Within a Sphere by Arnaldo Pomodoro 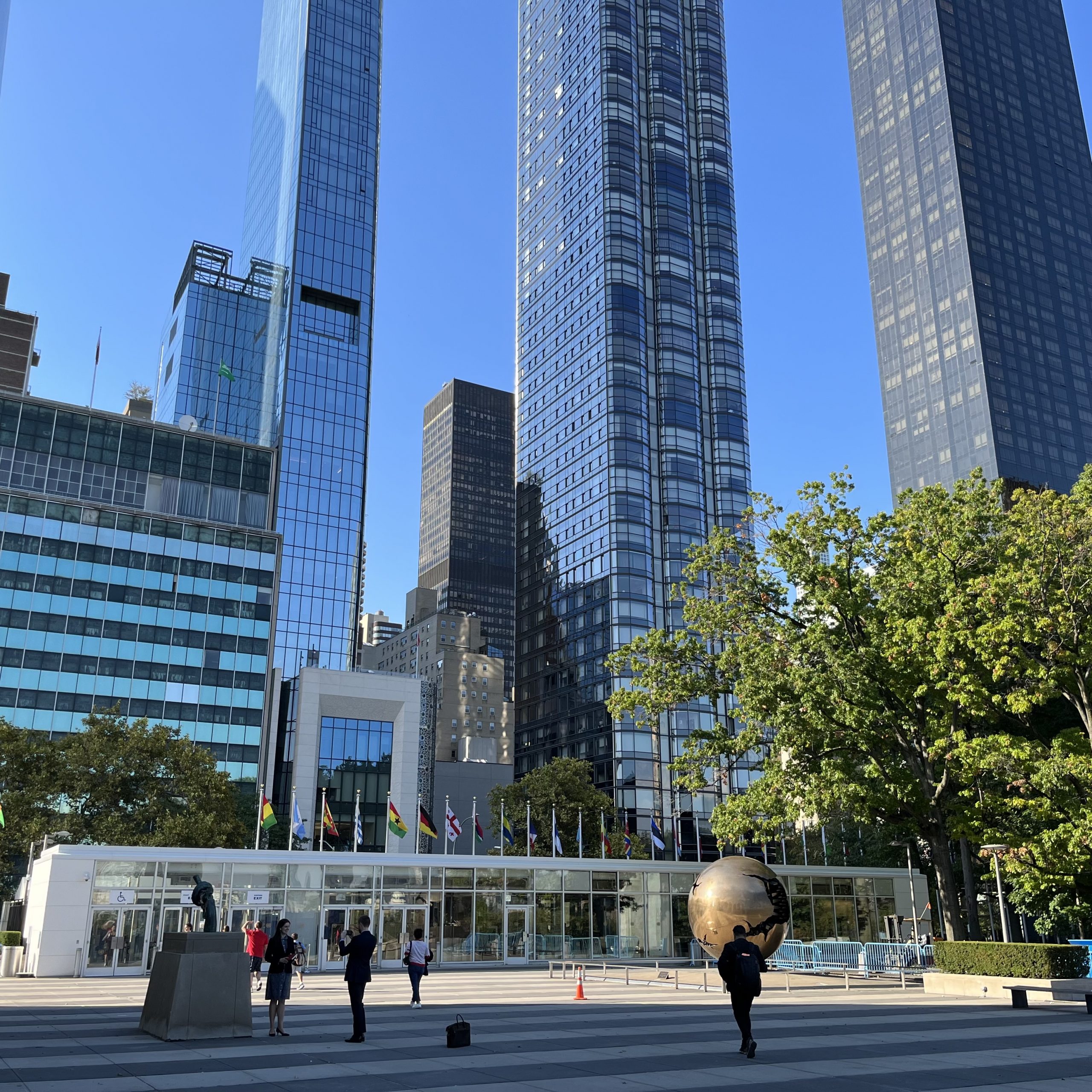 Looking back at the entrance to the UN

There was much more art inside. The first piece you encounter is a life-size statue of Nelson Mandela, gifted by the Republic of South Africa: 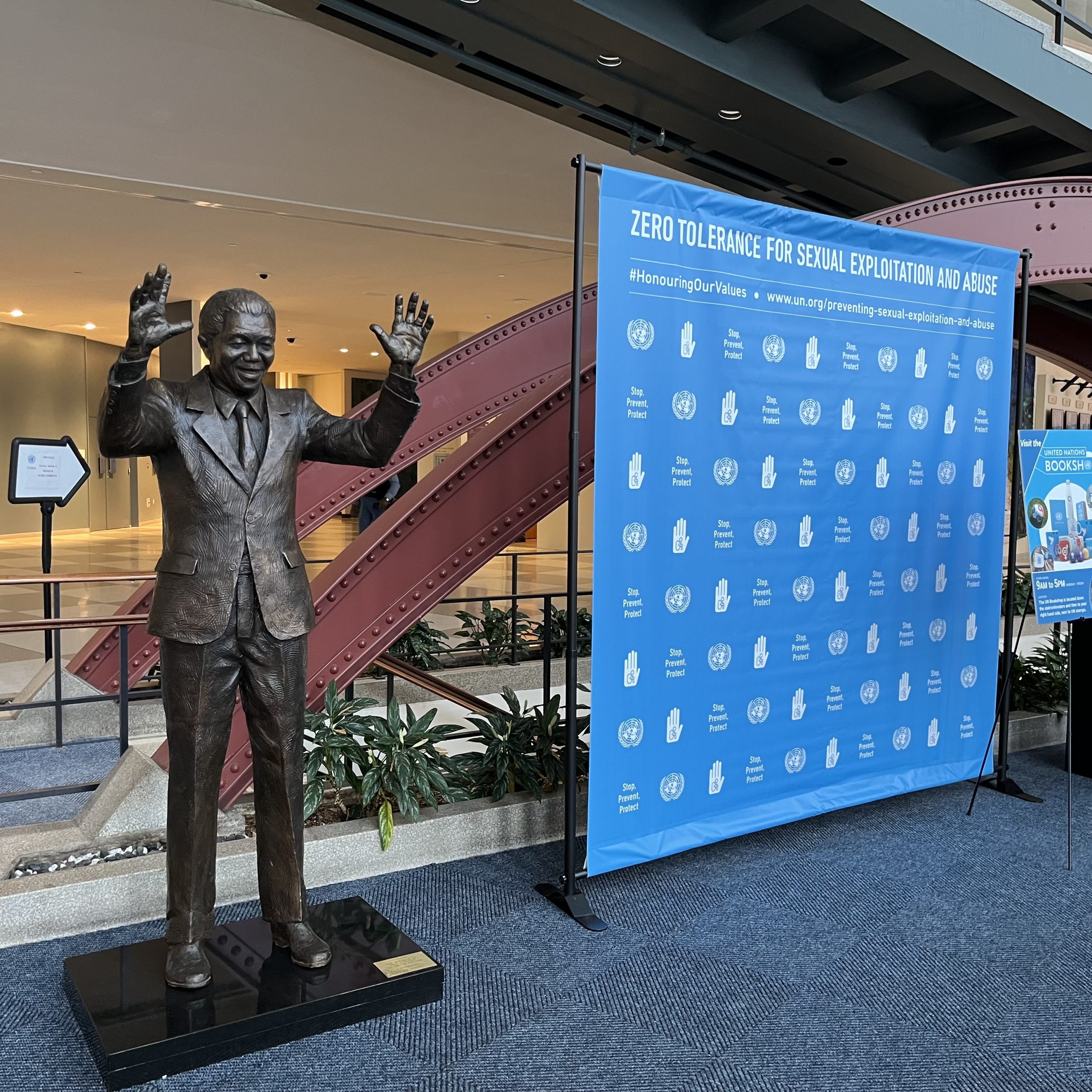 A statue of Mandela, offering me a warm, friendly greeting

A little further in are a series of silk portraits of the previous Secretary-Generals, gifted by Iran: 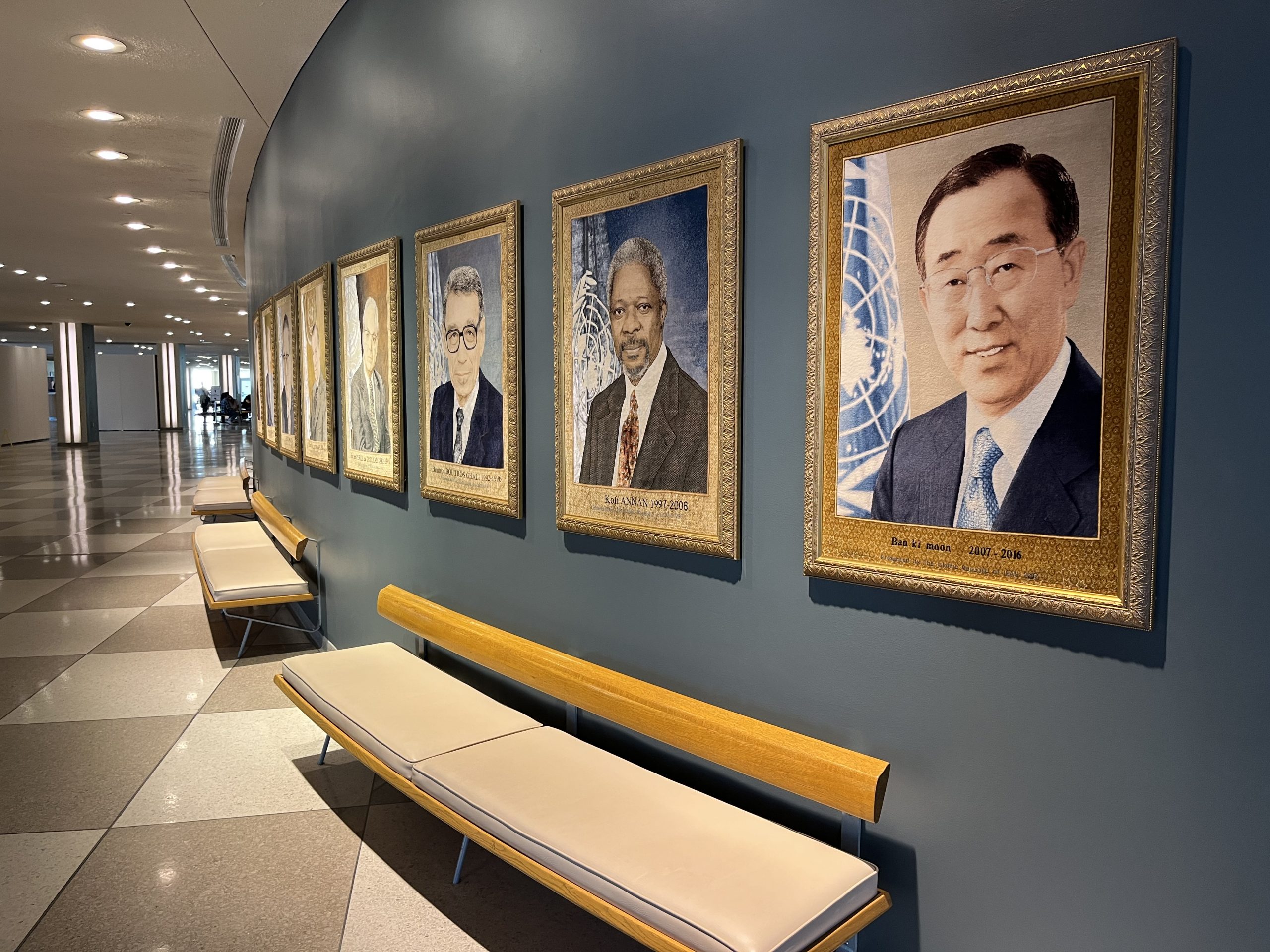 Silk portraits of the Secretary-General

The most striking artwork that I saw was a gift from Belarus, a 12ft 6in by 33ft tapestry depicting the 1986 Chernobyl nuclear disaster: 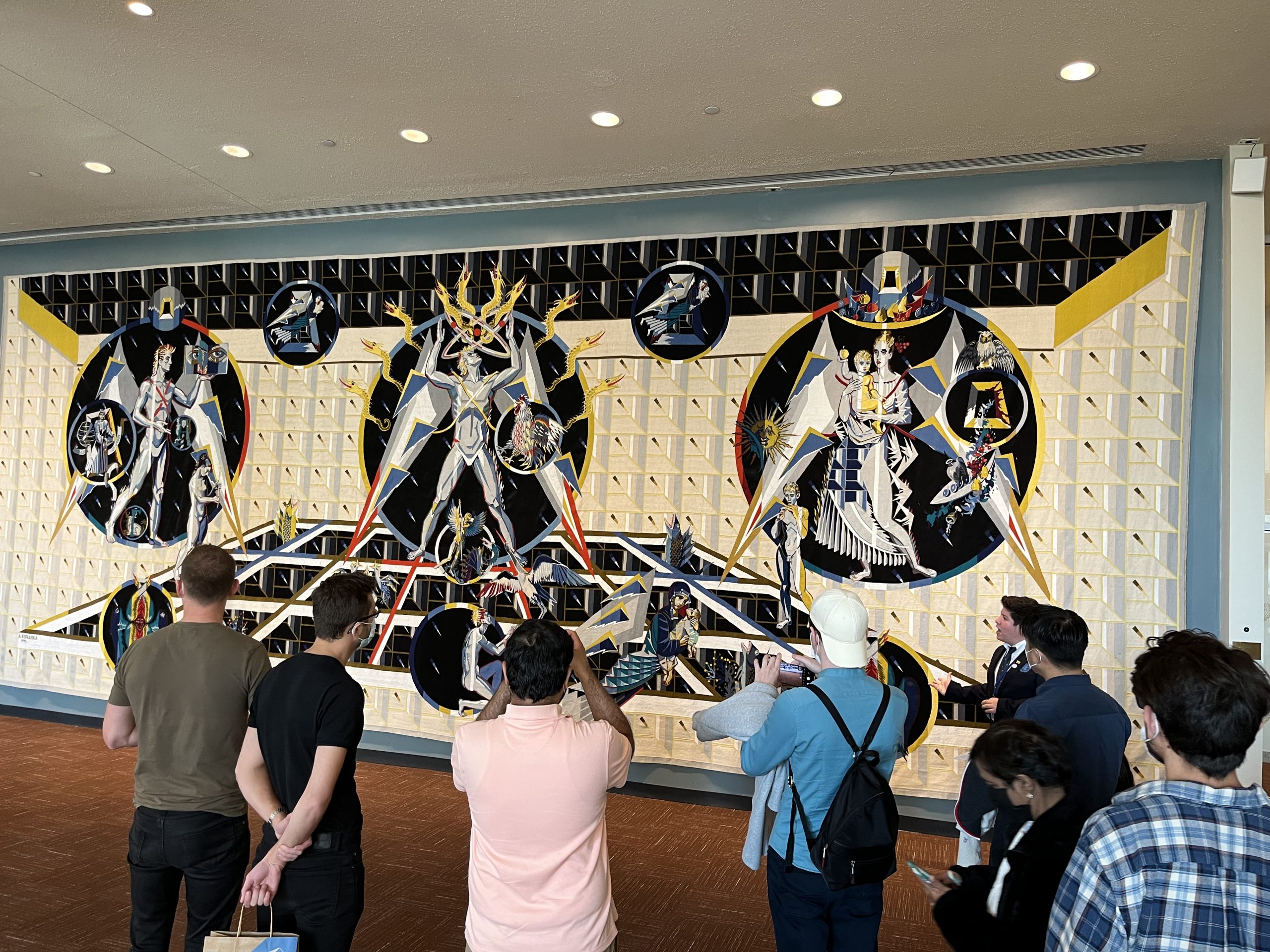 We also got to see a mosaic called The Golden Rule, based on a painting by American artist Norman Rockwell. The piece features the phrase ‘do unto others as you would have them do unto you’. As we looked at it, our guide said that we share universal values that we are all the same; I couldn’t help think of the things going on around the world which show that this isn’t always true. 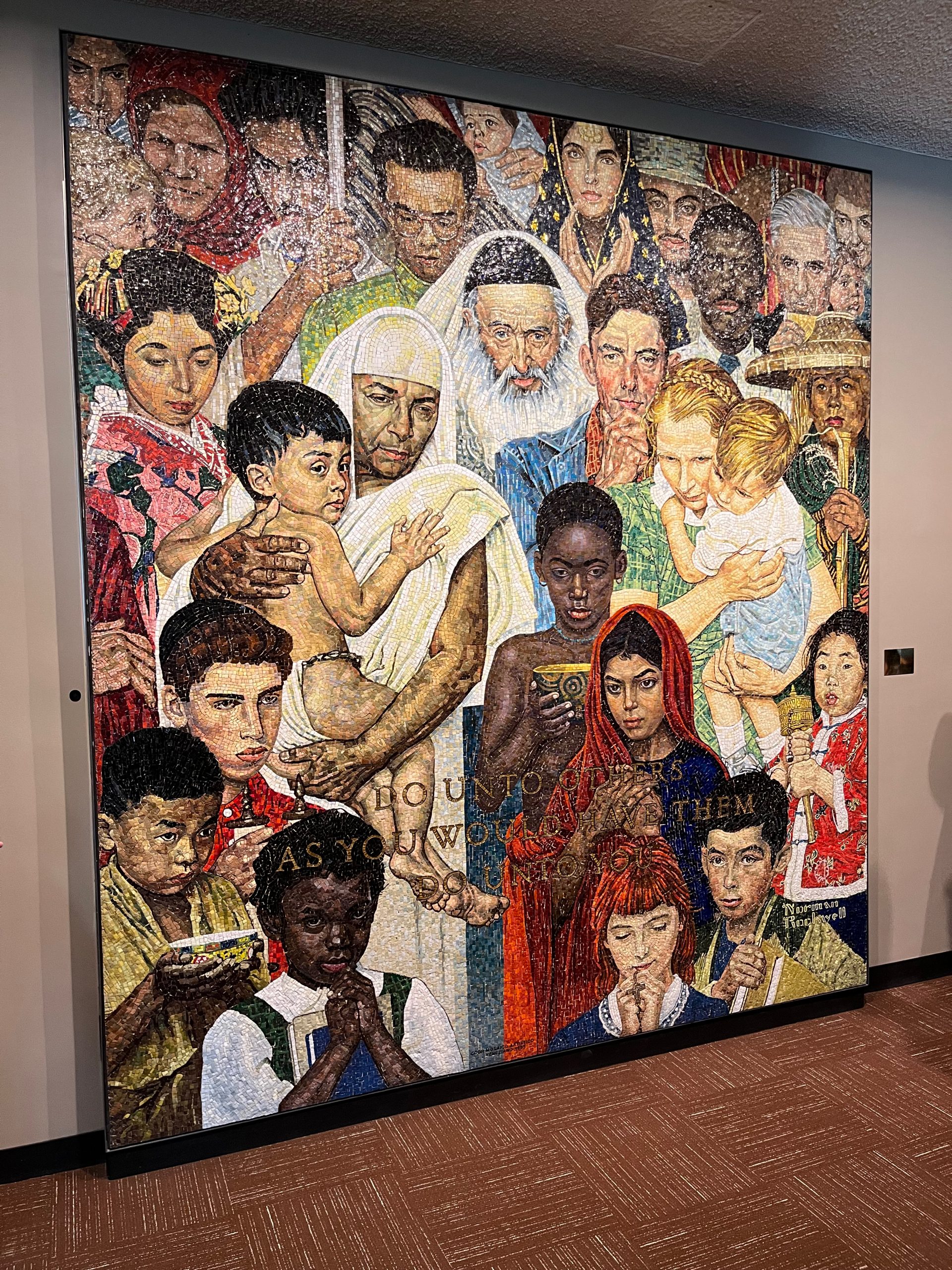 The Golden Rule, based on a painting by Norman Rockwell

The ticket had advised to be at the UN an hour before my scheduled tour. As I had made it through the registration and security processes so quickly, I found that I could just walk into an earlier one than I had planned. They all leave from a central tour desk. The tour operator validated my ticket, gave me another sticker to say that I had been checked and told me to wait for the next English-language tour to start.

The tour itself was quite something. I had expected the visit to be interesting, but hadn’t anticipated that it would be so moving.

Our first visit was to the Security Council Chamber. Our excellent Ecuadorean guide spoke about the history, structure, function and even the artwork of the Chamber before inviting us to take photos. It felt strange to be in a place that I have seen so many times on television over the years, thinking about all of the debates and decisions that have happened here. 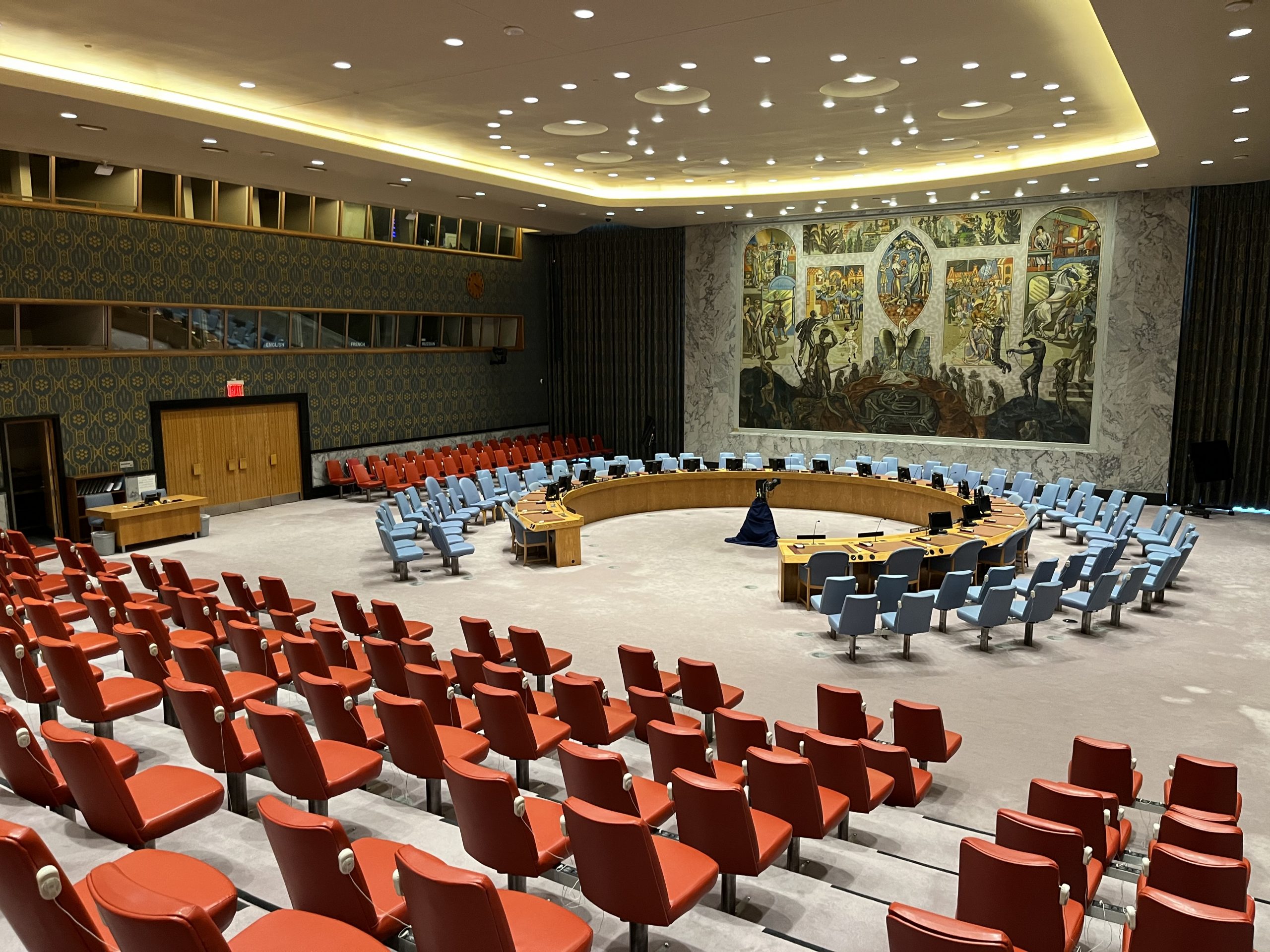 The draperies and wall coverings in the Chamber were designed by Norway’s Else Poulsson, “showing the anchor of faith, the growing wheat of hope and the heart of charity.” 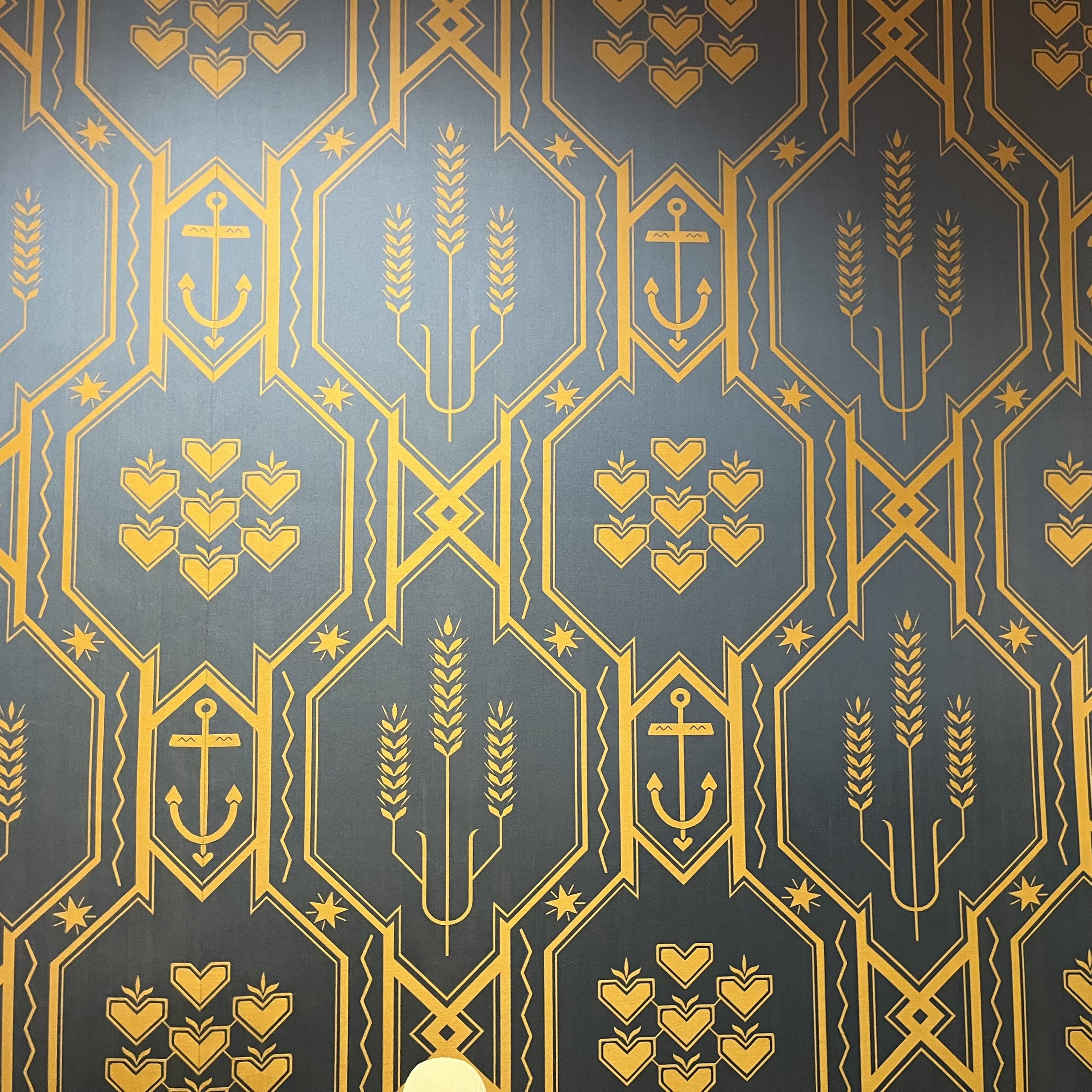 Wall coverings in the UN Security Council Chamber, designed by Else Poulsson 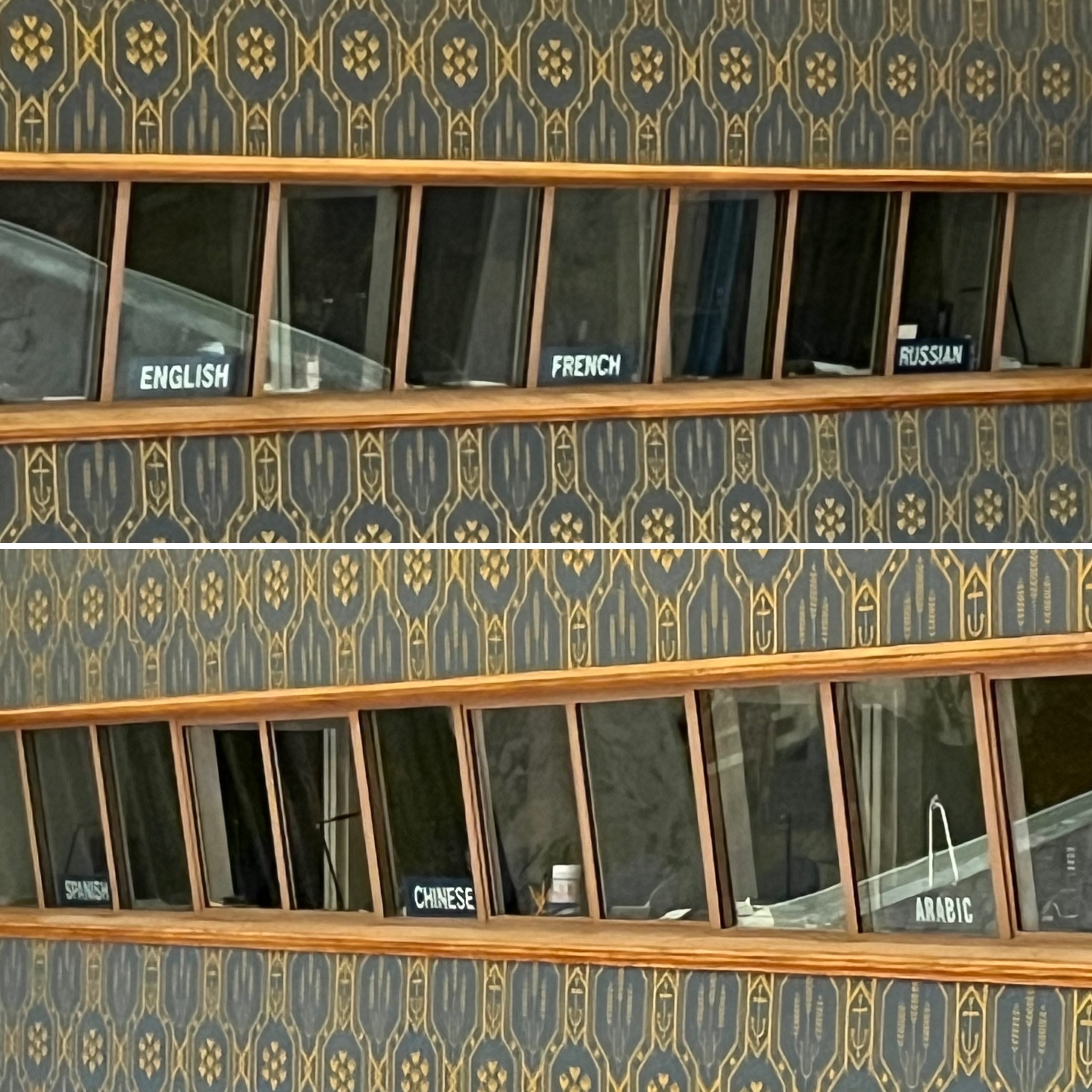 Next up was the Trusteeship Council, originally established to promote and support colonies moving towards self-government or independence. According to the UN’s website, “The aims of the Trusteeship System have been fulfilled to the extent that all Trust Territories have attained self-government or independence, either as separate States or by joining neighbouring independent countries.” This hasn’t stopped the business of the Council, and we were fortunate to be able to see a session in progress. 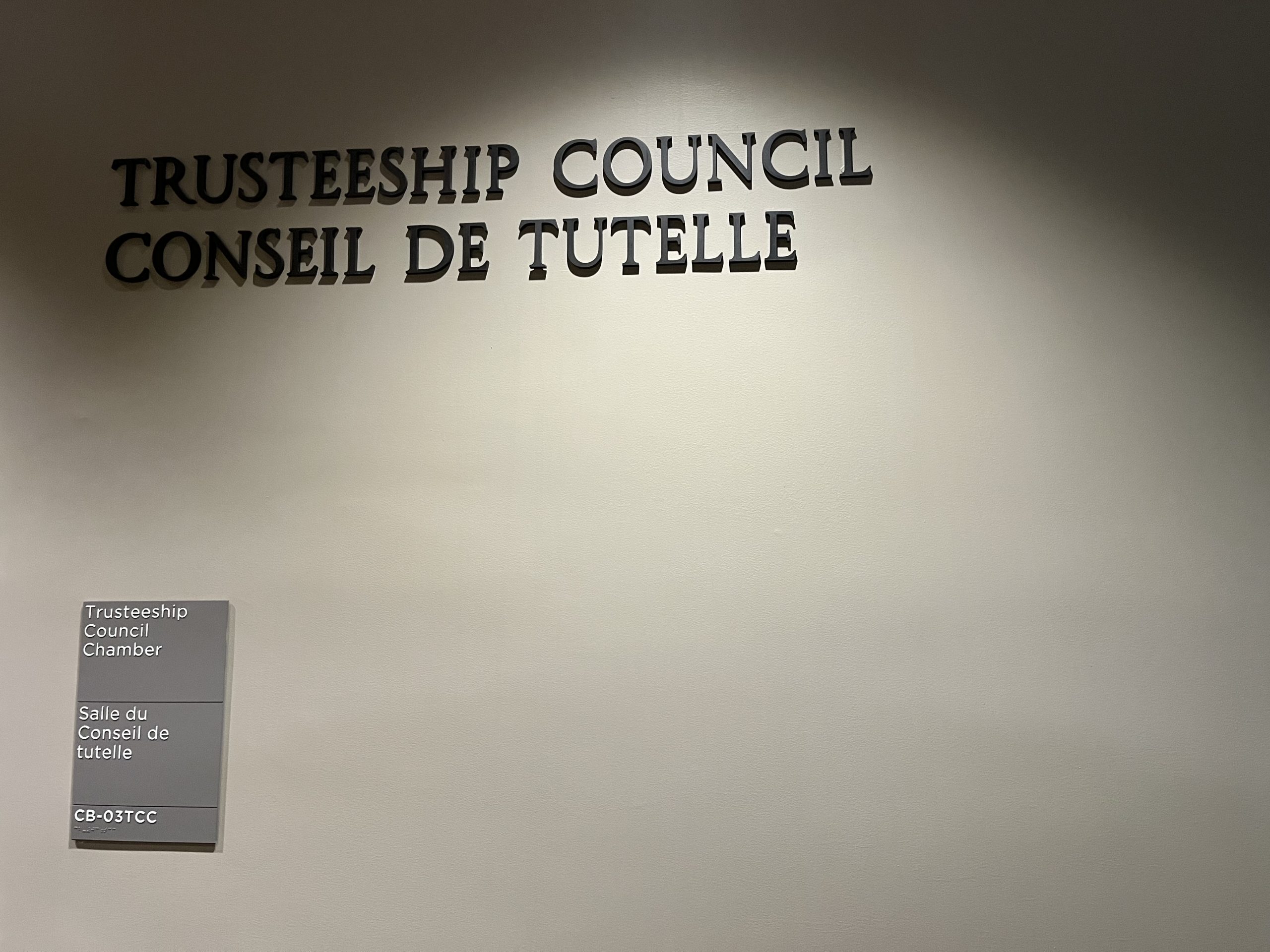 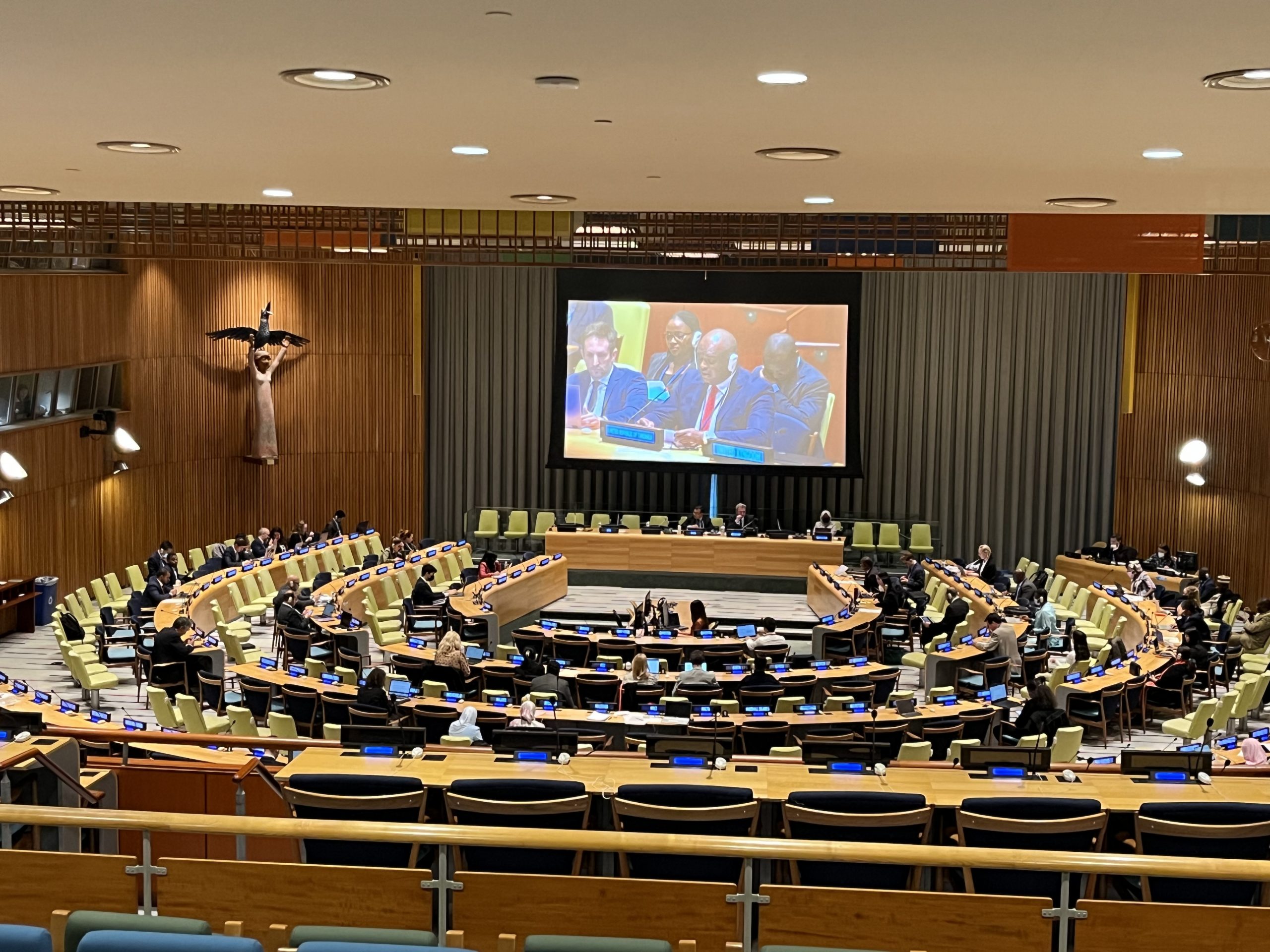 We then popped into the Economic and Social Council (ECOSOC) Chamber, recognisable by the beautiful 1950s-style orange and white curtain called Dialogos, designed by painter Ann Edholm. It’s actually the third design to have graced the Chamber since it opened in 1952.

Our guide gave us an interesting fact about the chamber. From Wikipedia:

The pipes and ducts in the ceiling above the public gallery were deliberately left exposed; the architect believed that anything useful could be left uncovered. The “unfinished” ceiling is a symbolic reminder that the economic and social work of the United Nations is never finished; there will always be something more that can be done to improve living conditions for the world’s people. 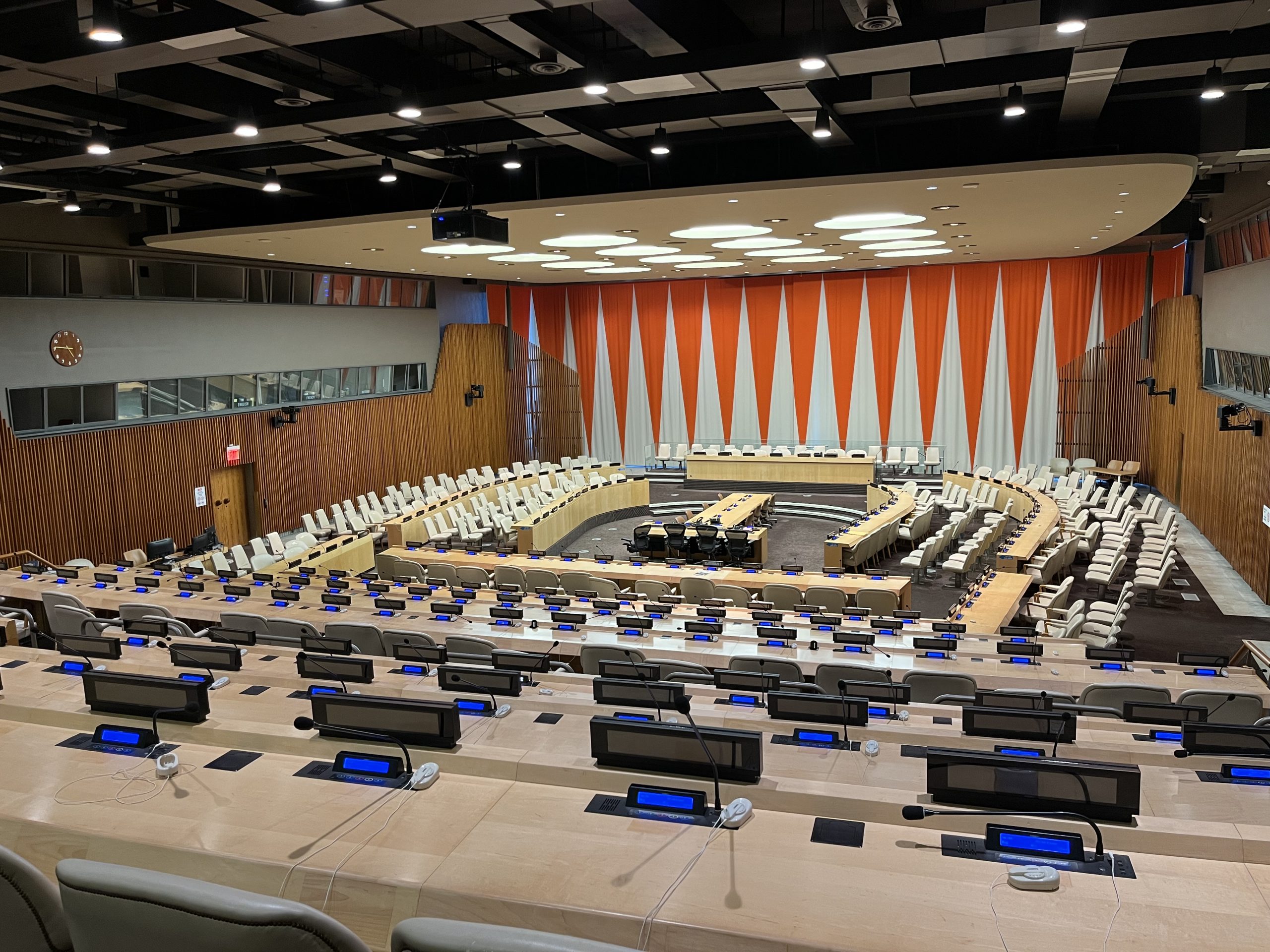 As well as the artworks, various walls throughout the building are home to informational displays relating to the work of the UN. I wondered whether the politicians that came to this place for meetings ever stopped to look and consider these pieces. There is a wall of artwork showing the Universal Declaration of Human Rights, another showing where the UN is currently undertaking peacekeeping and/or humanitarian operations, an illustration of global military expenditure versus development and disarmament, and a summary of the UN’s response to the Holocaust. 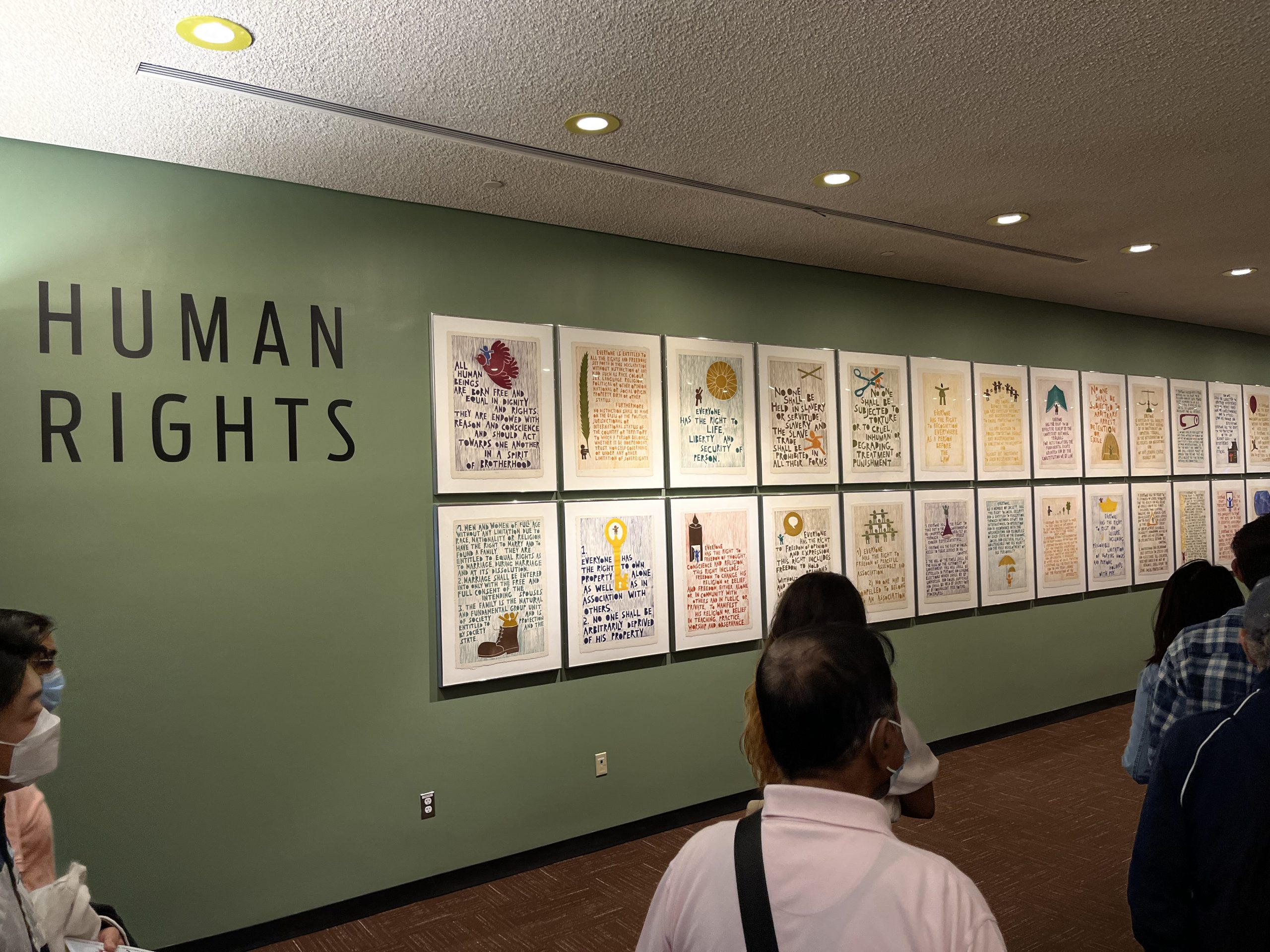 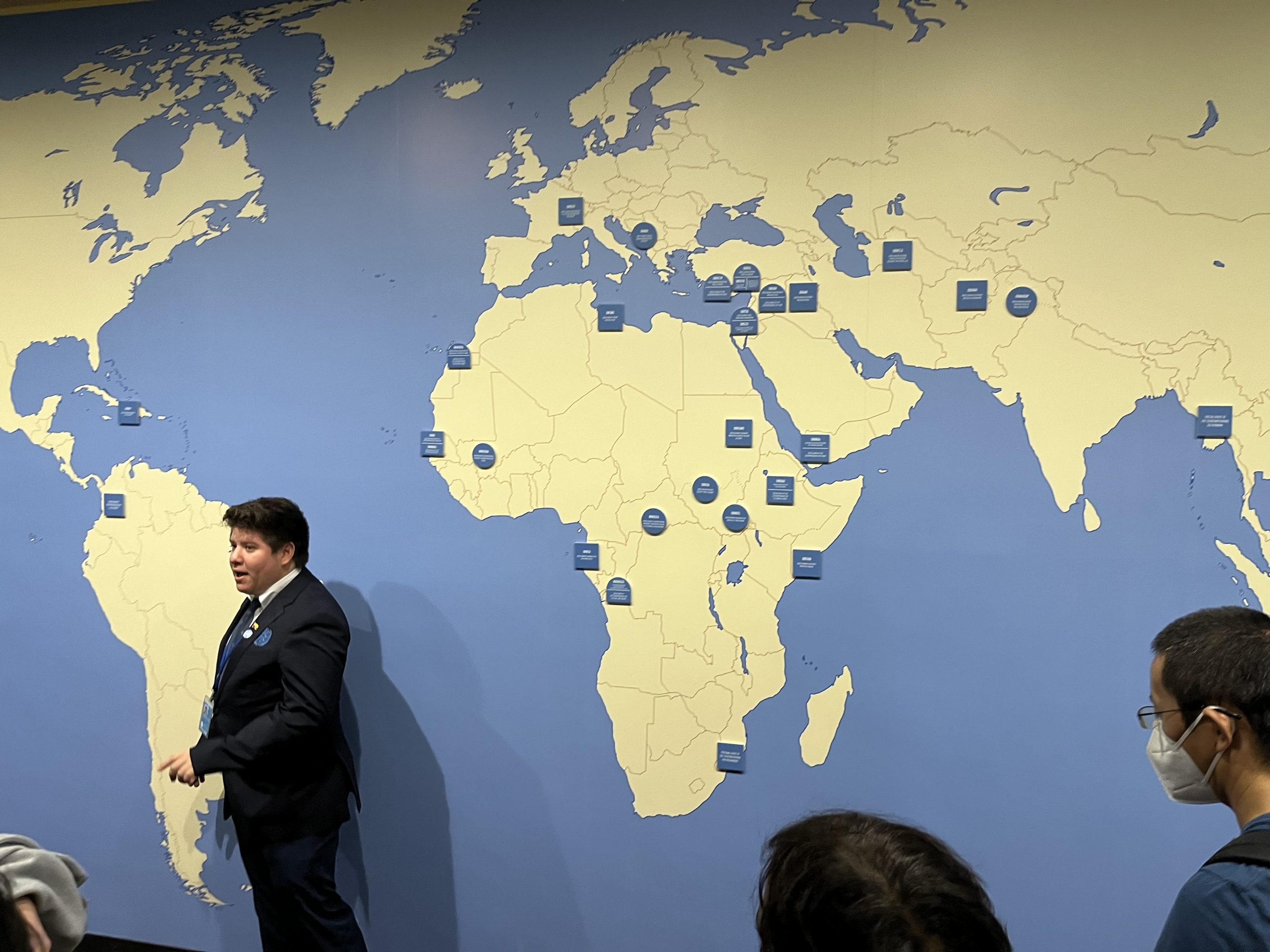 Map of the UN’s peacekeeping and/or humanitarian operations 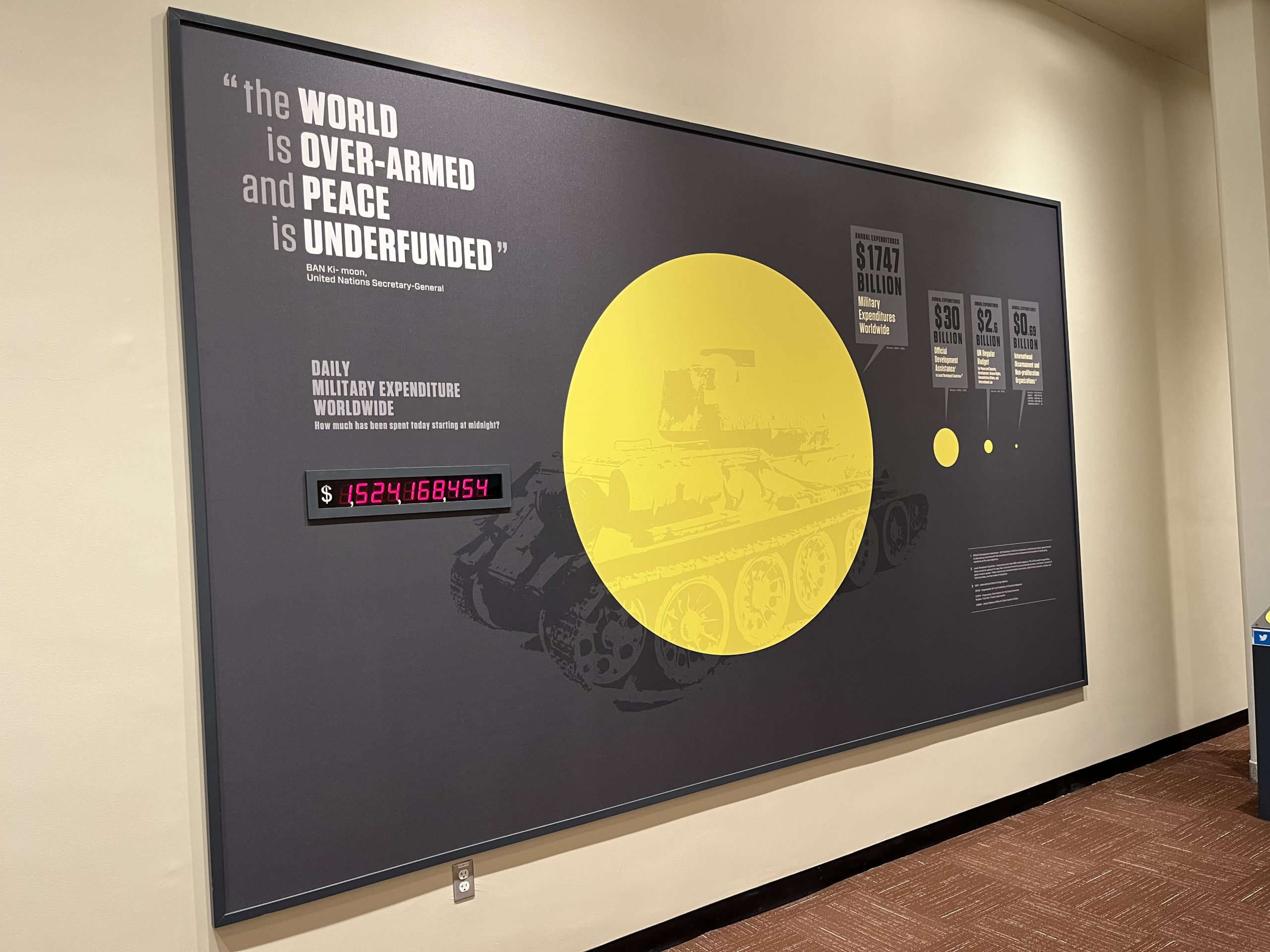 The world is over-armed and peace is underfunded 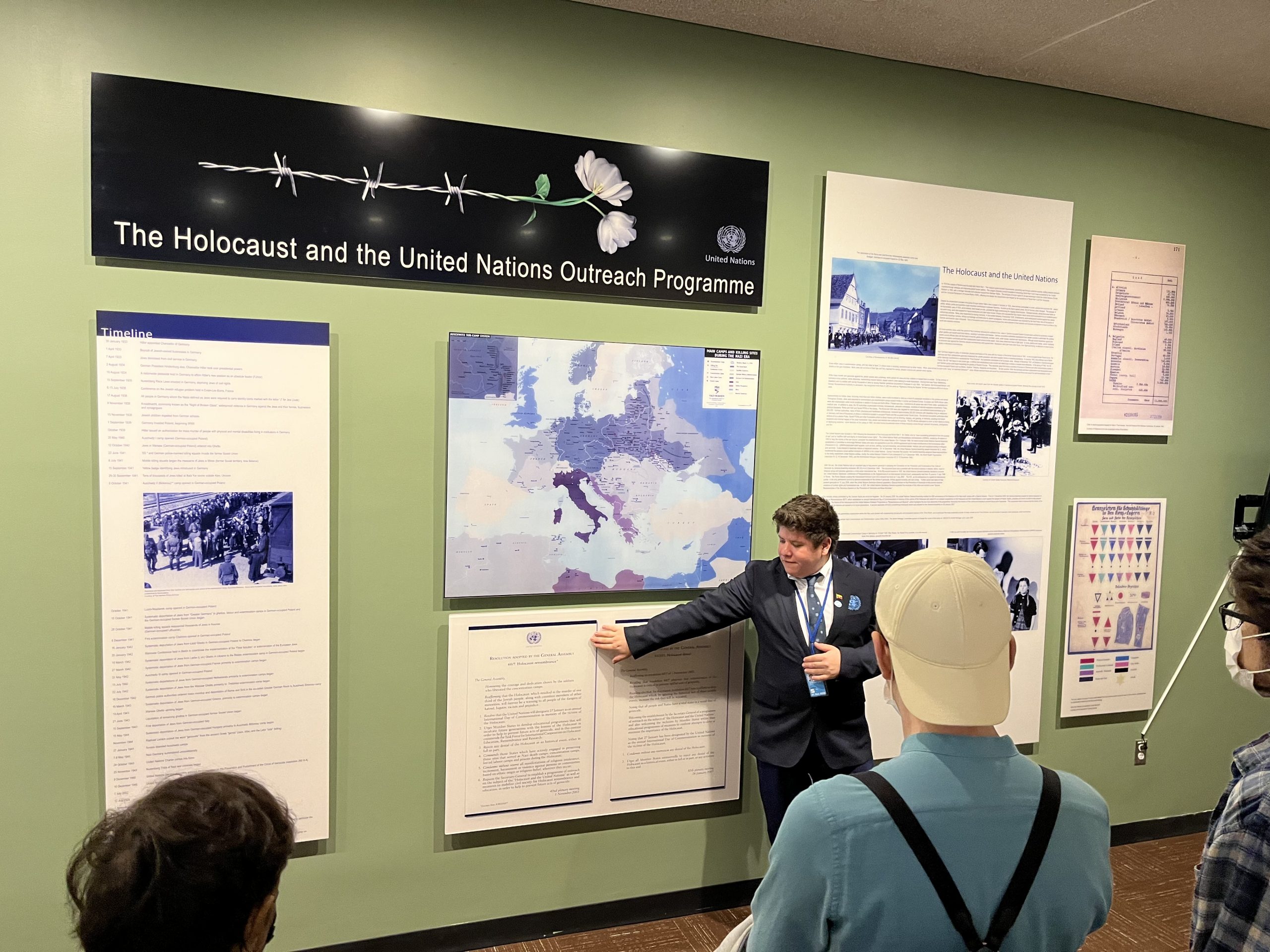 Wandering around the building we got to see some wonderful unique views New York, including a new angle on the Chrysler Building that I had never seen before along with a new perspective on the East River. 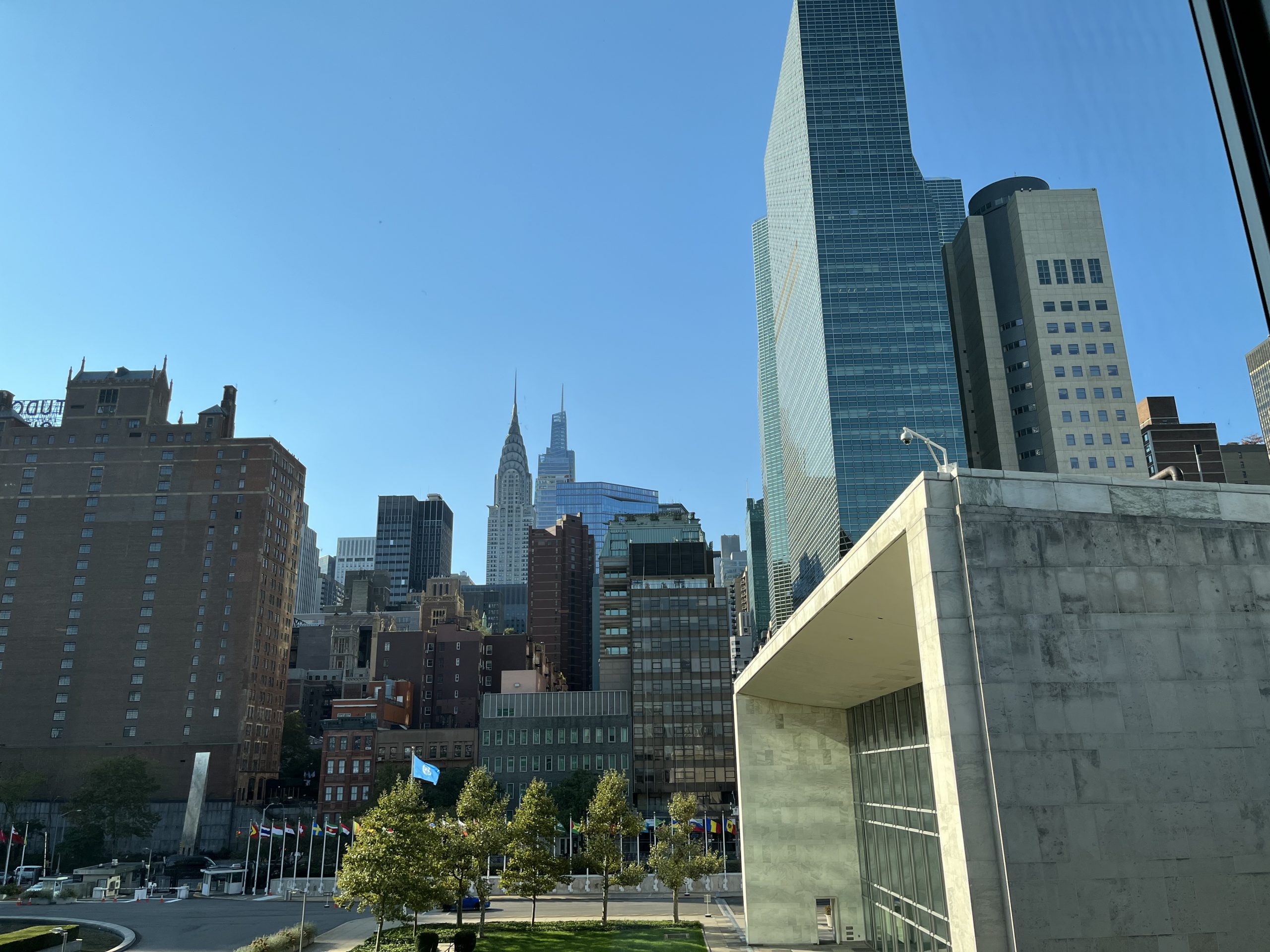 The Chrysler Building from the UN 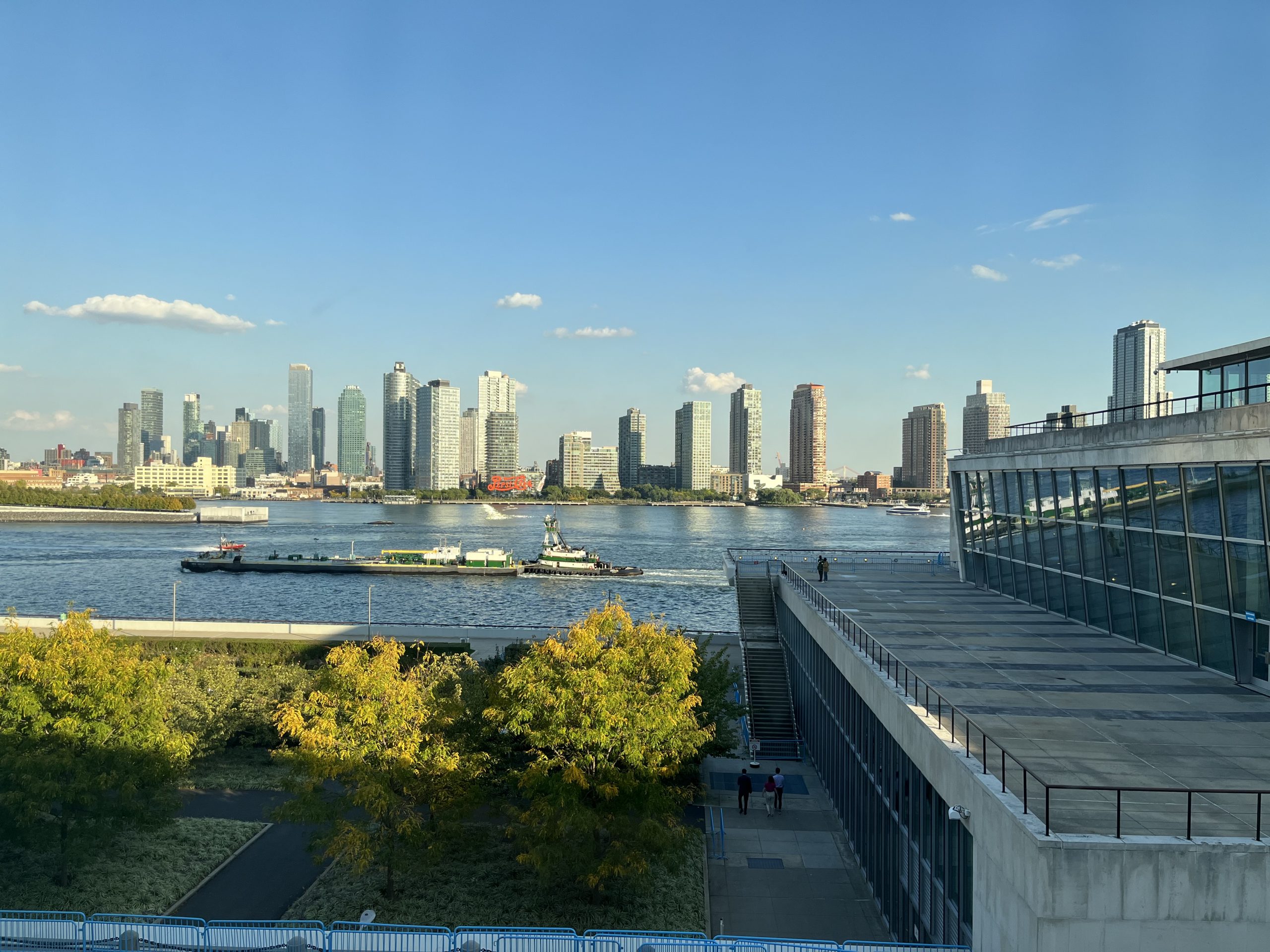 Looking out across the East River from the UN

Our final stop on the tour was the General Assembly hall. It’s a beautiful room which looks even more stunning in real life. It was interesting to learn that the seating plan is put together for each session by drawing lots to see who will occupy the first seat, with all of the countries then being seated in alphabetical order based on their English names. 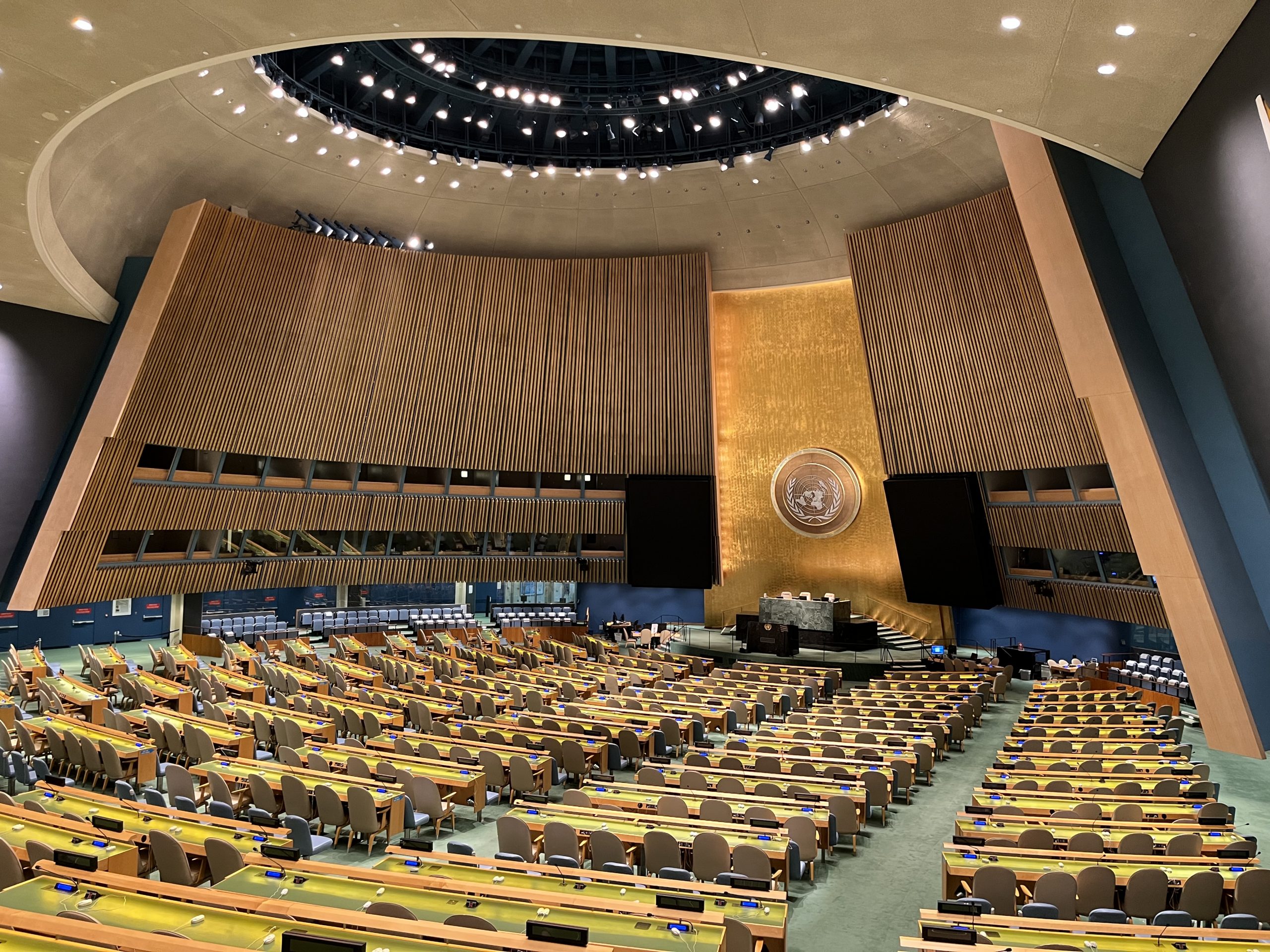 Murals in the General Assembly hall, referred to as ‘Scrambled Eggs’ and ‘Bugs Bunny’. Yes, really.

At the end of the tour there is an opportunity to visit the United Nations gift shop. It’s a strange place, with a small selection of arts and crafts from around the world. The UK was represented by a cheap-looking tea set. There were also some garish, gigantic, trophy-like vases that were priced at thousands of dollars. Apparently, and somewhat unbelievably, they sell these big pieces on a regular basis. All of the money goes back into funding the organisation.

Wandering around the building reminded me of being at my University, which was first constructed in the 1960s. Big, airy rooms, council chambers like lecture theatres and artworks everywhere. It felt familiar, in a good way.

Visiting the UN was a great way to spend an hour. It’s a beautiful building for an incredibly aspirational organisation, filled with inspiring things.