It was a struggle today. I only managed just over four hours’ sleep last night. I was up just very early this morning in order to fit my indoor bike trainer session in before an early work meeting. 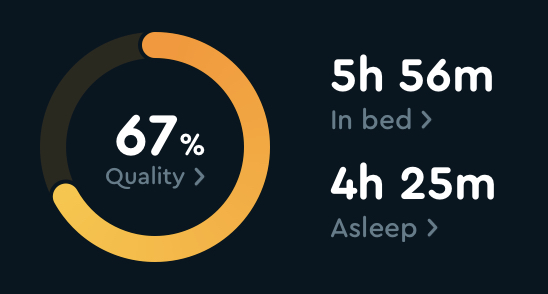 I had planned to go to bed earlier, but we have a young teenager who has just moved into the ‘not tired at night’ phase and it doesn’t yet feel right to leave him to shut down the house while we ascend the wooden hill.

Due to the lockdown I am missing the hour of walking that used to be part of my daily commute to and from the office, so since March I’ve been prioritising exercise on most days. I enjoy exercise for its own sake, but it’s also motivating that there are numerous articles about how desk-based jobs are literally killing us:

Both the total volume of sedentary time and its accrual in prolonged, uninterrupted bouts are associated with all-cause mortality, suggesting that physical activity guidelines should target reducing and interrupting sedentary time to reduce risk for death.

But…other research says that lack of sleep may lead to Alzheimer’s disease in later life. I remember hearing how Margaret Thatcher got by on four hours’ sleep a night, making her the “best informed person in the room” according to her biographer; she suffered from dementia in her final years.

A wise man that once worked with me said “you can’t cheat the body”, and he’s right. But given the choice between exercising and sleeping, what’s the right balance to strike?