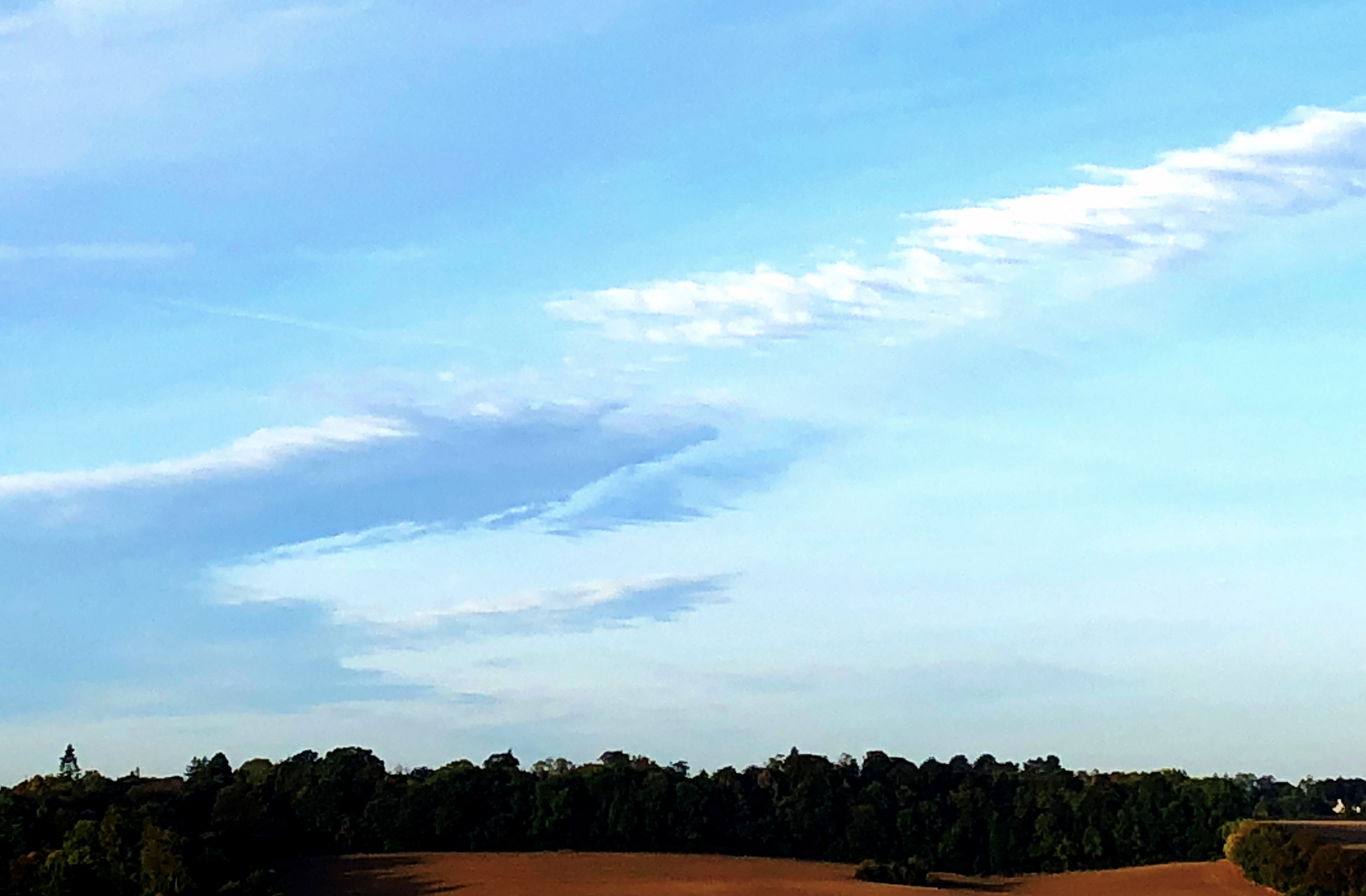 I knew when I was putting things in the diary a little while ago that this would be a busy week, and so it proved. The process of getting the budget done at work has brought our critical work into focus, and I took the opportunity to reboot our daily ‘standup’ team meeting. I now have a small set of graphics for the team to look at each day to remind us of our key goals, how many weeks we have until December when the whole of South Africa seems to go on holiday (eight) and until the end of March when we need to deliver (261). The graphics also show what our immediate and upcoming milestones are that we need to hit. It will take some getting used to — a couple of times this week I stopped discussions about items that aren’t aligned with our key goals — but I can already see the effect on the team as we push to meet the deadlines in front of us. I also plan to include Cost of Delay metrics in the graphics so that the whole team has an understanding about what being late will mean in real terms; hopefully citing these will lend weight to requests we make to teams across the organisation.

We had our first Full Governing Board meeting of the year on Wednesday. I’m both very happy and slightly sad to say that I now have ‘Vice’ in front of my title of Chair of Governors, having handed the main role over to a colleague. She is going to do an excellent job and I am very happy that she is willing to take on the work. It’s been a real pleasure and a privilege to have the Chair’s role for the past three years. I had stepped up to it with some reluctance given that I work full time and it has been a struggle. I love the work of supporting the school through governance and I am hoping that a reduced role will give me the opportunity to do a better, more focused job.

On Monday evening I went along to the Digital Project Managers London meetup to learn about Liberating Structures. It had been a while since I attended meetup and the description pulled me in, promising “simple rules for groups, designed to include everyone in shaping the future” which “harness the creativity and intelligence of everyone in the room, whilst having more fun”. I wasn’t disappointed.

In a nutshell, Liberating Structures are tools and techniques, ’microstructures’ and constraints, that can be applied to group situations to get people to participate, leading to better outcomes. Yes, I was sceptical too. But by the end of our first exercise I could immediately see their value and wanted to learn more. 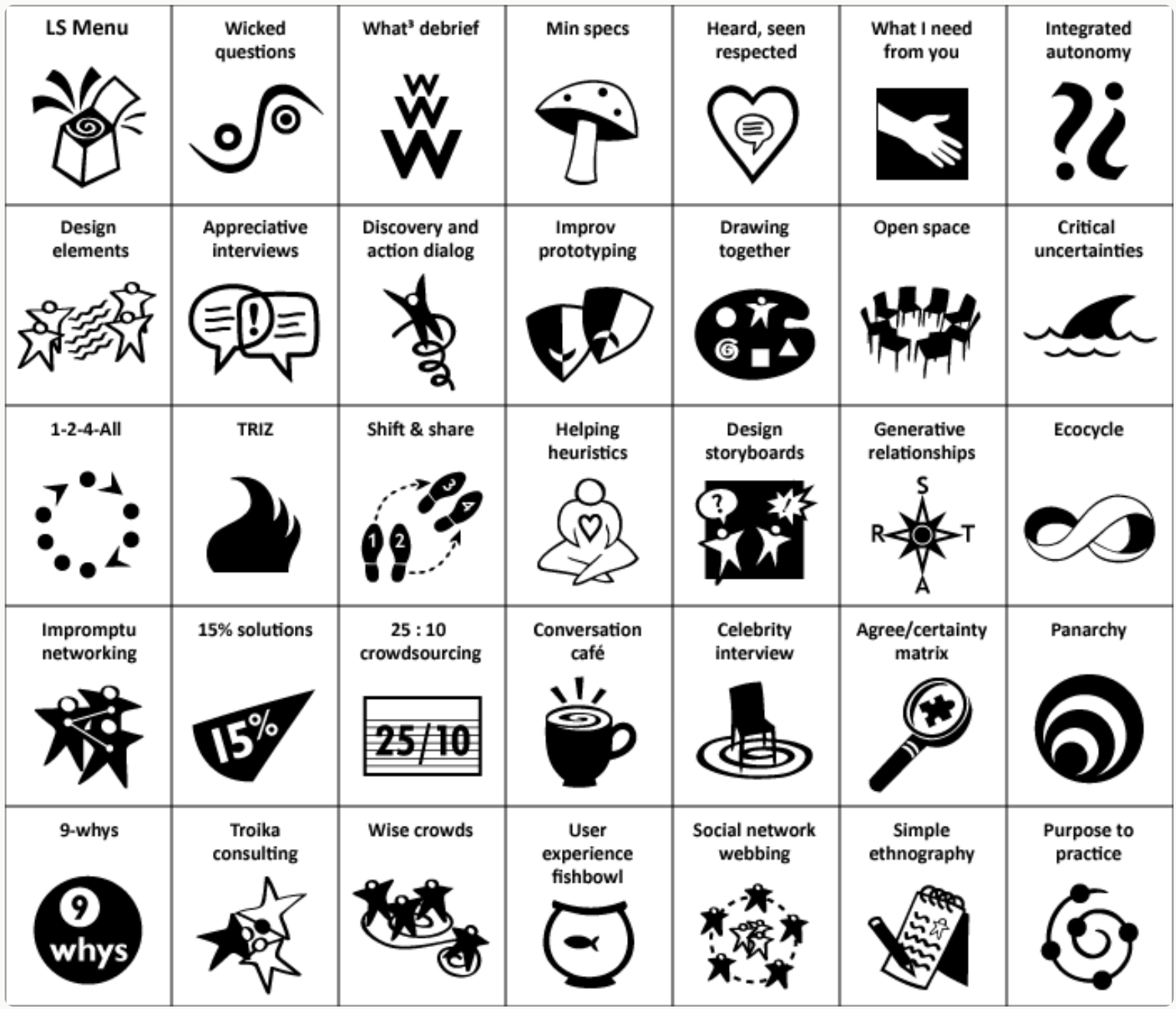 The first exercise we did was Triz. Heaven knows where the name comes from but it does make it easy to remember. Here’s what we did:

The effect was astounding. By focusing on a generic situation in the first step we could completely de-personalise the process, with the latitude to be much more creative without getting bogged down by the baggage of real life. It immediately got me thinking that this would be a very useful exercise to do with the programme team that I am leading — they all expect me to know what I am doing and possibly may not always speak up if things start to go off the rails, or if they spot that something isn’t getting done when it should be. By de-personalising an exercise where the team can jot down ideas on the worst programme they can imagine, they would likely get many more insights out into the room that we could then reflect on as a group. In our session, the whole exercise was complete in a very short space of time and was extremely powerful. It wouldn’t take much to apply this technique at work.

Next, we got into groups of three to try out Troika Consulting. One of us agreed to be ‘the client’ and the other two of us were ‘the consultants’. The client had a minute or two to explain to us a situation that they were having a problem with. The consultants we were then given two minutes to ask clarifying questions of the client. After that, the client turned around 180° and stood with his back to us while the two consultants debated his issue and possible solutions to it. The client could say nothing while we were doing this and we discussed the problem like he wasn’t there. This was really interesting to me, as the other consultant and I had completely different views as to what the client should do. When our time was up, the client turned back around and de-briefed us on what he had heard, what he found valuable and what he was thinking of doing as a result. Once again, this was so simple but remarkably effective — our client told us that it was the best meeting he had had in some time.

Finally we had a go at What, So What, Now What? This exercise didn’t land with as much impact as the others but it did get me thinking. David Heath, who led the session, asked us to jot down what we had observed about the evening and its exercises. For this ‘What?’ part of the exercise he emphasised that we should ‘keep low’ on the ‘ladder of inference’ and make sure that we were noting down pure observations only. This is actually a lot harder than it first sounds, and we got a little hung up on whether you can actually ever truly observe whether someone had been engaged by the work. Nevertheless, it was an interesting process. 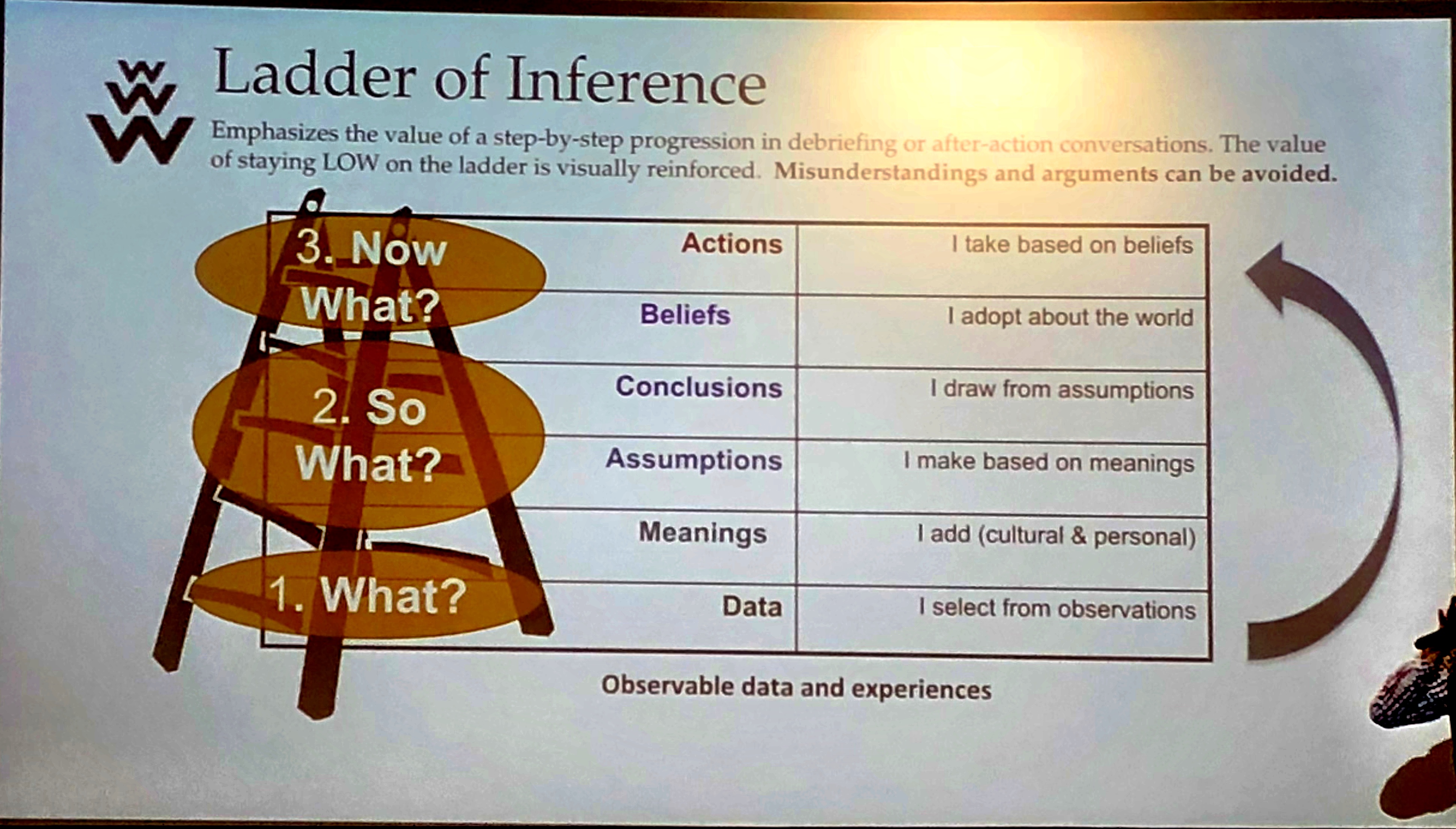 By the time we reached ‘Now What?’ we had lots of people across the room committing to find out more about Liberating Structures and taking the exercises back to work with them.

At the end of a Meetup there is usually a little bit of pizza and chat with the other attendees. Generally I end up feeling slightly awkward at these things, sometimes finding myself going down cul-de-sacs of conversation that have no easy exits and trying to carefully judge listening and talking too much. This time was an exception — there was a great crowd and I met some very interesting people, swapping contact details at the end of the night with a definite intent to follow up and talk more. A brilliant evening.

After work on Tuesday I wandered over to the offices of The Guardian in King’s Cross. I had signed up to a short evening course called Telling Stories With Data: [An] Introduction To Hand-Drawn Data Visualisation. It was exciting to be in a place that plays such a big part in my everyday life with the news that I consume, and after having read many tweets from Simon Ricketts about the late-night happenings there. After a quick security check I was shown up the escalator to reception where I kept my phone in my pocket and people-watched for half an hour or so, wondering who everyone was and what they did for a job as they streamed out of the office. I’m 90% sure that Gary Younge wandered past at one point, but I wasn’t sure enough to say hello.

Once there was a critical mass of us we were shown through the security barriers to the staff canteen where various drinks had been laid on for everyone. There were a couple of evening masterclasses running so there were lots of us there, all engaged in slightly awkward chat as we waited.

Stefanie Posavec was our tutor for the evening. I wasn’t familiar with her work until signing up for the course, but it turned out that we were in great hands. Stefanie had undertaken a project called Dear Data with Giorgia Lupi, a fellow information designer, where they created postcard visualisations about different aspects of their lives, every week for a year. The results are beautiful and fascinating, and the result of many many hours of labour. We only had three hours, which was only enough time to scratch the surface, so we had to get scratching. 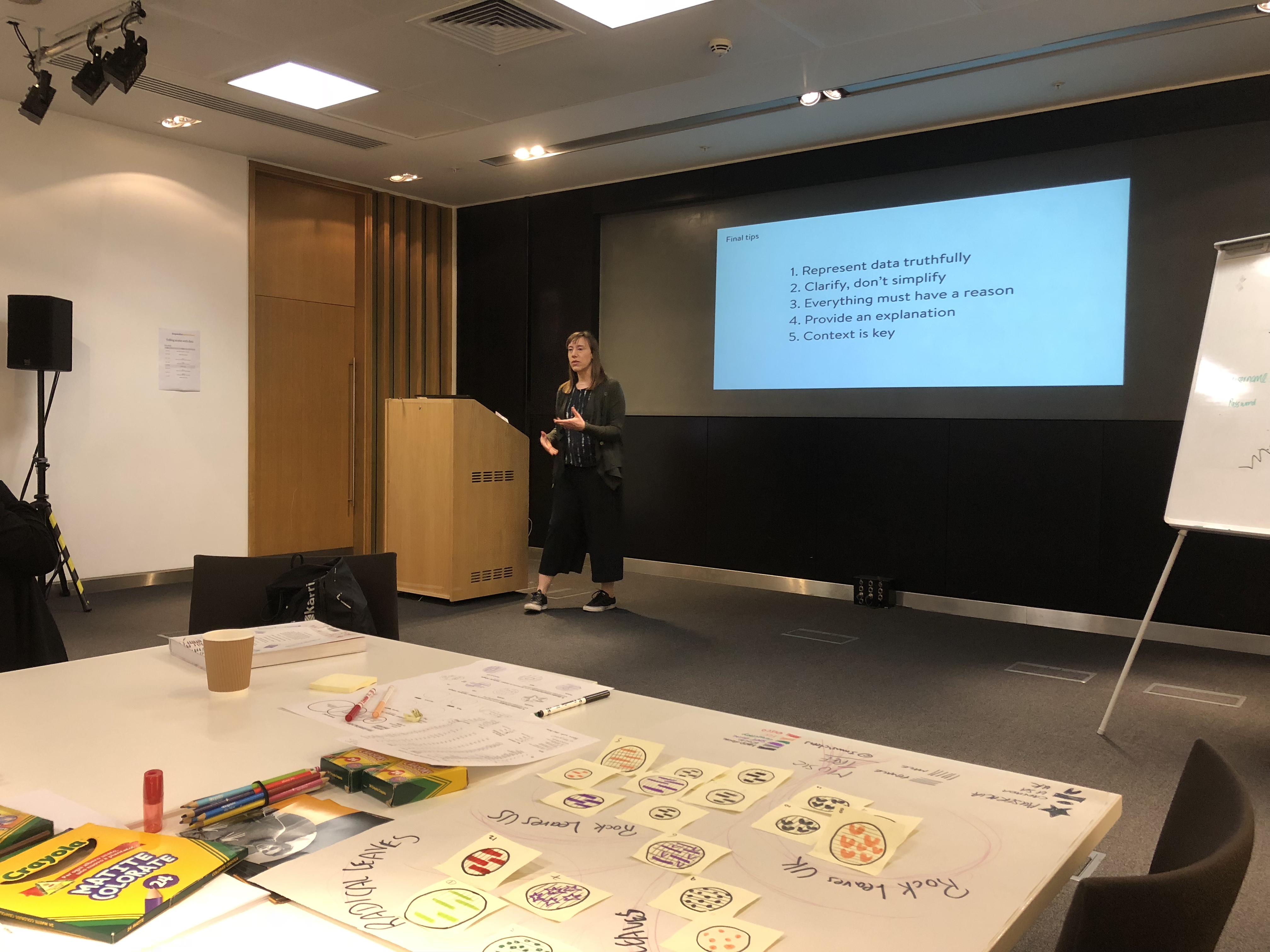 We were put into groups of three and given a simple data set to work with, containing details of the top 20 bestselling albums of all time according to Wikipedia. We had sales figures, years of release, genders of the performers, genres of music and country of origin to work with. We had to come up with a visual language for how we would represent the information and then get to work drawing a single glyph for each album. 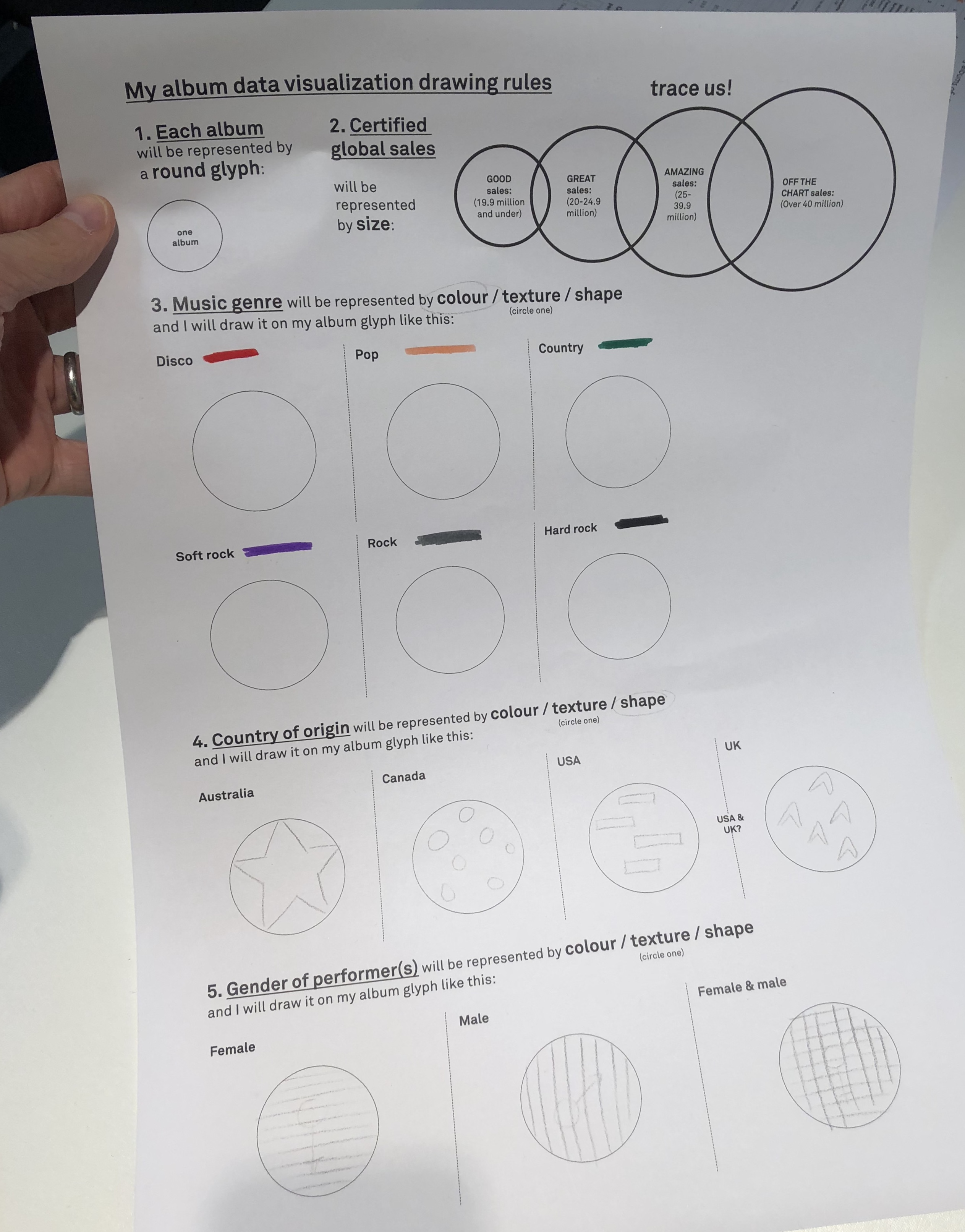 I ended up in a wonderfully diverse team, an IT guy alongside a female graphic designer from Canada and a lady studying for a masters in drama. Once we’d figured out what we were doing and had created all of our glyphs we now had to find an interesting way of representing them. We decided to cluster the information by its prominent features and ended up creating a ‘music tree’: 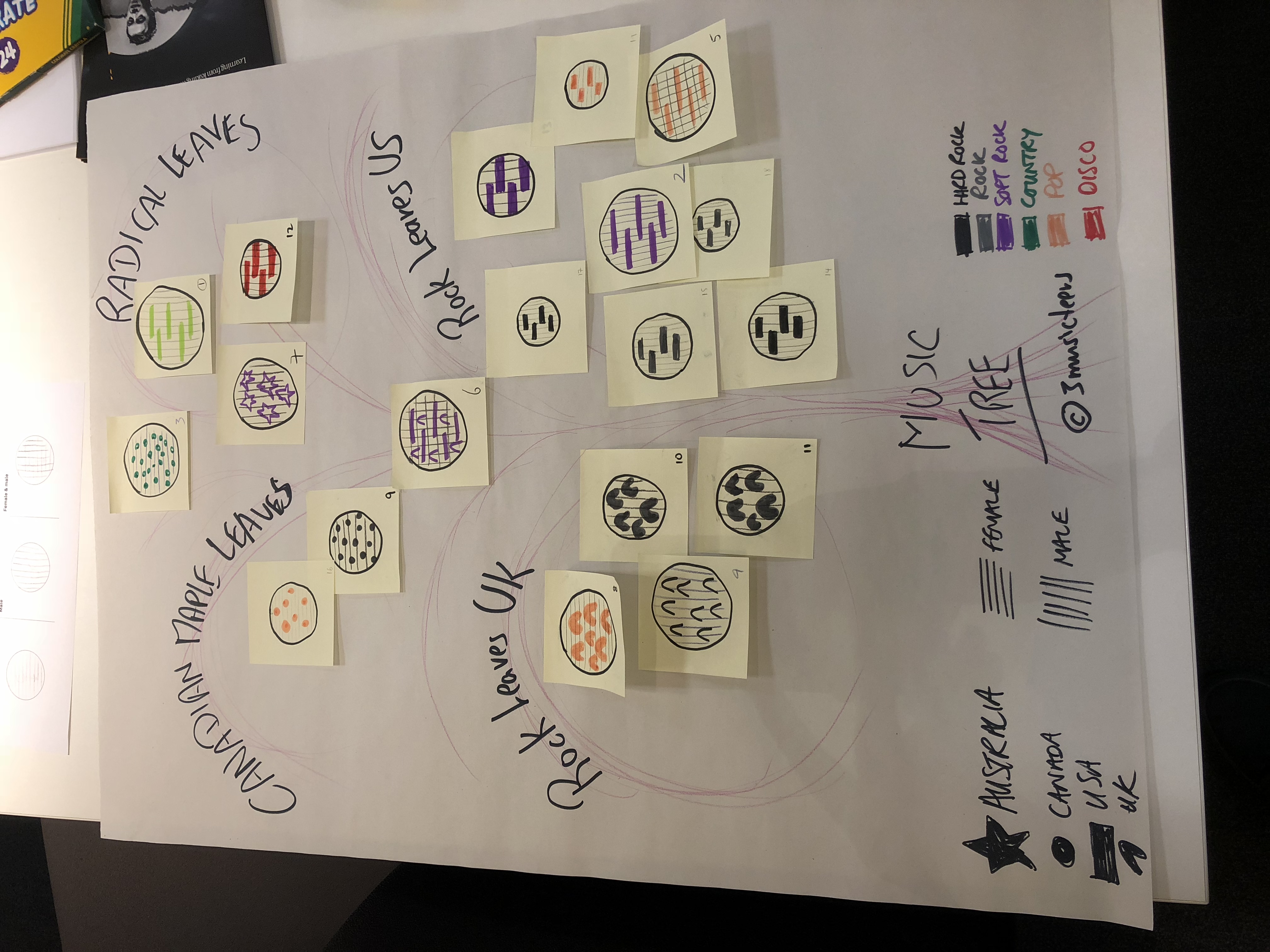 Most of the other teams used some kind of graph axes to plot their glyphs, showing quantifiable data alongside the categorical information. Our creation was missing something by not having the years of release visible on the visualisation, but the size of the circles already showed the amount of sales so we felt that re-using this wasn’t essential. 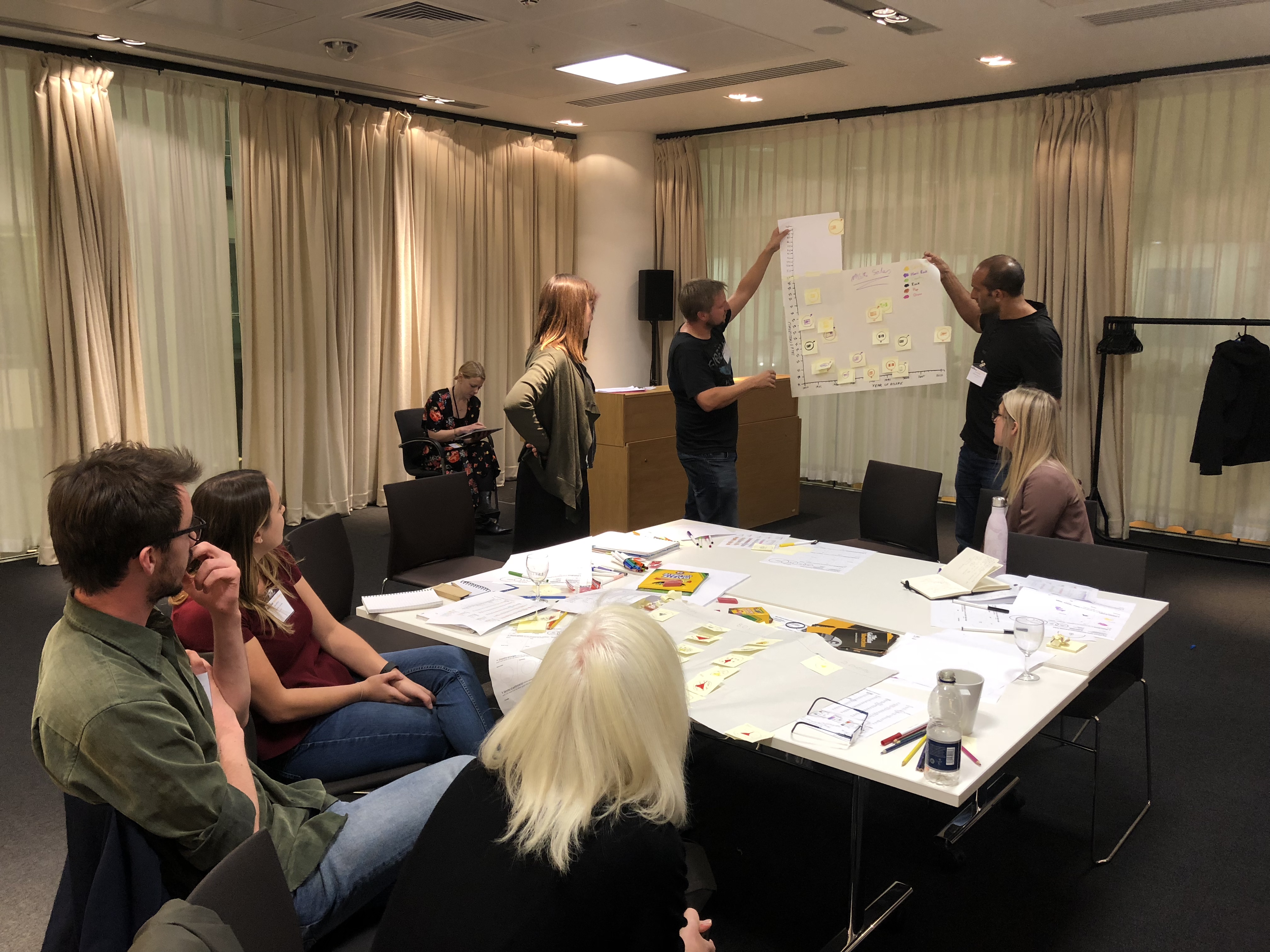 It was a fun night with a great instructor and lovely people once again. Stefanie has sent us her slides and I’ll definitely be referring to them again.

Yet another weekend of childrens’ sport kept us busy as usual. My eldest boy must be half-aquatic as he braved the Birmingham rain on his way to achieving second place in the U13 National Road Relay along with his two teammates. Both boys made their football matches on Sunday and it was lovely to be out in the sunshine — we had one win and one loss, but both of them are really enjoying it this season.

Increasing the focus and keeping the pressure on at work to get through our near-term milestones over the next two to three weeks. Re-establishing our weekly team meeting. Getting out on my bike again, cycling to Oxford for the start of the Chiltern Cross-Country League with both boys competing this year. And Album Club #92.