I’d better start the weeknote by acknowledging the achievement of this marvellous young man: 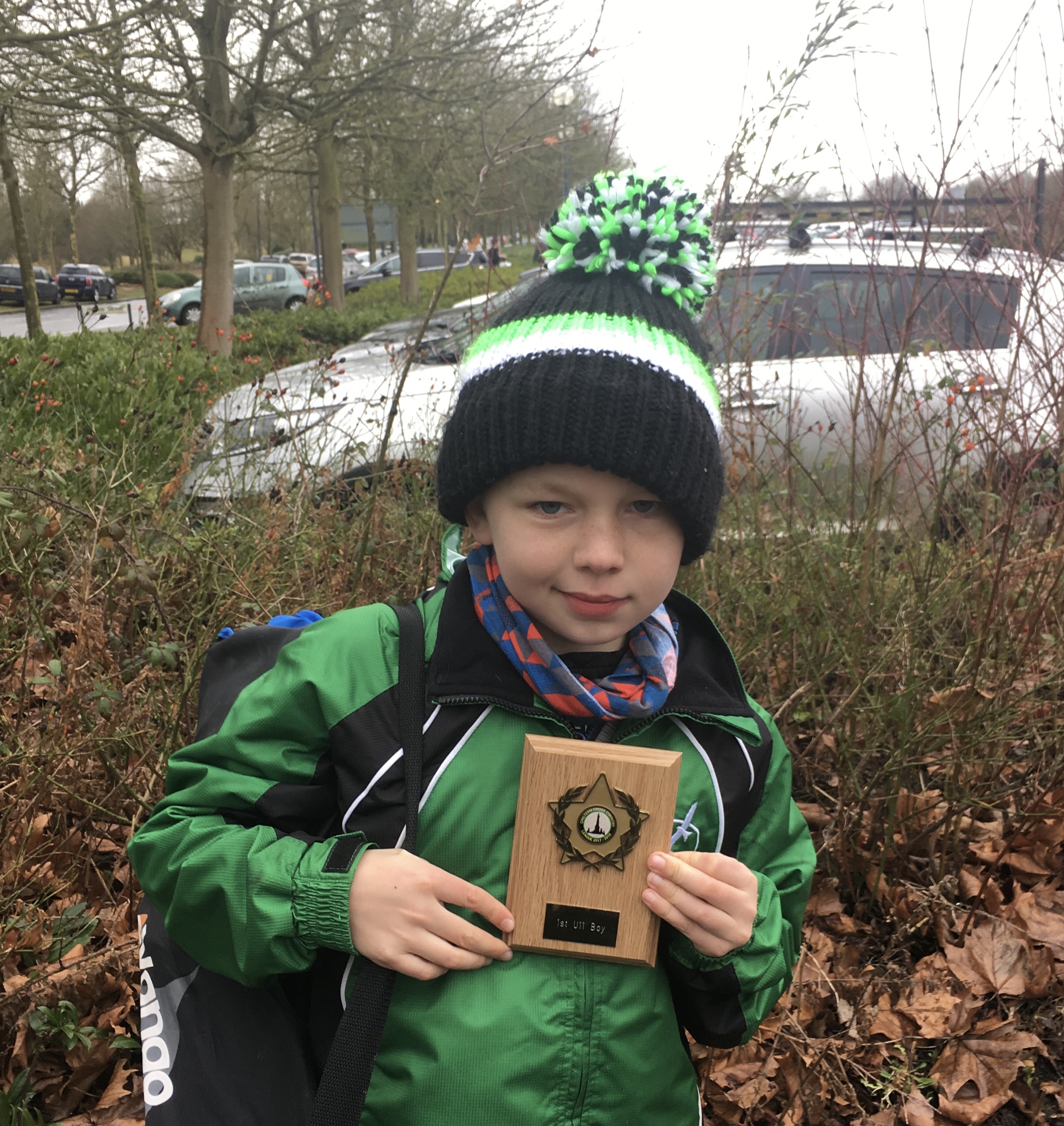 Last weekend he ran his final race of the season in the Chiltern Cross Country League, won it, and became the overall winner for his age group. Well done fella, it was a fantastic effort and we’re all very proud of you. (Love that boy.)

We actually managed to spend quite a bit of last weekend together as a family, which was fab. After a life-refocusing chat with a friend the week before I made a conscious effort to spend time with everyone. Mrs D and I watched Lion on Saturday night which almost destroyed me, and we followed it up with a Sunday night family viewing of Empire of the Sun which finished me off completely. Being emotionally drained as I went to bed led into me being woken by the Monday morning alarm, promptly falling asleep again and waking for a second time in a panic half an hour later. Rushing around in order to make it to my first meeting of the day was not a great start to the week.

Once it got going, the week turned out to be a very good one. We’ve moved forward on a significant number of issues on our programme, resolving some technical problems (typically to discover that there are more lurking further down the line, but it was ever thus) and I am starting to see a path towards how we can finally get our software rollout going again. One of our particular issues looked more specific and complex than it was, but somehow it revealed itself to me from a different angle and I realised that it exists today, on its own, whether we carry on with our programme or not. (A case of being too close to the detail.) We’ve re-framed it and presented it back to the wider team; it does need dealing with but hopefully not as part of the work we’ve set out to do.

One of our key team members was on holiday for half term this week and we missed him more and more as the week went on. There are still just too many little items we need to solve before I can sit back and be confident the rollout team can fly in (literally) and hit the ground running with our users.

It was a week where I wished I had my favourite poster to hand to put up in the office. With people being out I’ve had to get into the detail of some of the problems and I was again humbled by the depth of IT infrastructure and what I don’t know. ADMX files were the final new discovery of the week.

We’ve been learning a lot from the issues we’ve found. The problems have been framing our thinking about how we need to set ourselves up for the future as we make changes.

I had a minor wobble one evening this week when I started pondering my personal workflow again. I managed to pull myself back from it before I got too deep as after all these years I know there isn’t much to be gained from tinkering. As I mentioned some weeks back I still have tasks and to-dos in too many places and I was thinking about how I can improve. I’ve recently switched from Workflowy to Dynalist as they have taken the simple outline concept and run with it. The outline is a great way to be able to ‘see all of the things’ and zoom in but I haven’t quite committed to it yet as the be-all and end-all; I still have too many date-based reminders in Remember The Milk which I don’t want to mess with right now.

On the WB40 WhatsApp channel Matt Ballantine triggered a good discussion from his post on ‘decomposing collaboration’, looking at the types of tools people use. On the podcast he also noted people really want ‘bring your own software’ and not just ‘bring your own device’ — they want to use the tools they are comfortable with and proficient at. I see a specific case of this problem when working across different teams; we can focus around a kanban board, or project plan, or list of things to do, but I then need to take the things I need to do from those places and work them into my own tools, alongside all of the other tasks from other aspects of my life. As soon as you have to update the status of something in more than one place, it’s too much of an overhead.

On Tuesday night I attended a dinner with a cross-section of staff from my client’s office, hosted by a couple of the senior managers. The food was amazing and the format was very good, with everyone giving a lengthy introduction to their background and experience followed by an informal discussion amongst all of the dozen or so attendees. It was a great way to break down the barriers between the strangers that sit together in a crowded room every day and I can already see the impact. This was followed by an ‘all-hands’ breakfast with the Group CEO the next morning. They management team are really putting in great effort to foster a friendly, collaborative atmosphere in the company. The events and conversations got me thinking about how the barriers can be further broken down. It’s a long road to move to ‘working out loud’ as part of the culture — people need to get comfortable with not having a fully-baked message before they put it out there — and the work I am doing has a big part to play in providing the technology to enable it.

Next week we’ll be putting an internal-facing blog live and I’m looking forward to the team using it for all sorts of posts. Hopefully after many years of trying internal blogging in different roles this one will gain some traction and we can lead by example in a small way.

Taking my 8-year-old to football training on freezing cold, wet Saturday mornings is made much less of a bind by the chats I have with another one of the dads there. He’s an anaesthetist and I’m fascinated by the work he does and his take on things, so much of which seems to have similarities to the stuff I have picked up elsewhere. We end up covering so many topics in the course of the hour and my mind is buzzing for the rest of the day. This week we tackled:

It’s a shame there’s no football training this week.

I managed to get on my bike but only did 1h of a 1.5h turbo programme as I didn’t have the legs, or the will, to continue. I’m hoping that I can actually get out this weekend for a long-ish ride, only my second of the year.

Football refereeing went okay but I’m not enjoying it as much as I used to. I’m really not that great at it and seem to need to completely rely on the linespeople to flag for offside. I understand the rule but I don’t seem to have the capacity (or haven’t practiced it enough) to watch out for it whilst thinking about everything else that is going on in the game. If it wasn’t for the flags I would probably have called zero offsides in the match. We lost the game but the boys played really well, which seems to be the story of our season.

The kids and I finished off Star Trek: Discovery, which generally improved as the weeks went by. It’s wasn’t the Star Trek that I know and love — I didn’t feel empathy for the characters anywhere near as much as I did in the original series or Next Generation — but it was entertaining. I was disappointed a few episodes in when they started dropping f-bombs and the rating switched from 12 to 15; it was completely unnecessary and out of character with everything that had gone before (no pun intended). On the plus side the show had some good central gay characters and it was great that my boys got to see this represented as being just as ‘normal’ as any other kind of relationship.

After watching Lion I immediately reached for the book and finished it off in a couple of days. I thoroughly recommend it, whether you have seen the film or not. An extraordinary story and the best advert for Google Earth that there could be.

A thoughtful and widely-shared article about the future of technology got me thinking back to Bill Joy’s article from April 2000 yet again.

If you run a public-facing website and pull in lots of code from other places you really need to be running a content security policy and make sure you are getting automatic reports from your users. If I understand Troy Hunt correctly, this would have prevented UK and US Government websites from being “Infected by [a] Cryptocurrency Miner”.

It’s nice to have something that can get under the hood of what we mean by a ‘Digital Transformation’ as this is so many things to so many people. A common language and set of definitions is a great place to start.

The Spotify Mellow Beats playlist has accompanied me throughout the week. Great to work to and plenty to explore.

Programme team back up to full capacity, time to squish those last remaining issues and get the detailed plan running for our rollout, all whilst looking ahead one or two months down the line and making sure we’re ready for what’s next. Lots of reading ahead of another big midweek school governor meeting.