I had set my alarm early, but woke up before it went off. After leaving the office on 23 March 2020, I was going back. My company have asked for people so start formally returning from the end of September, but the office is already open for those that want to use it now. I figured that it would be good to test the water before everyone is back. Meeting up with my boss, some colleagues and a whiteboard to try and make sense of where we are and where we are going work-wise seemed like a good excuse to go in.

One of the best things about working from home is that for the first time in my life I’ve been able to develop a regular exercise habit, either getting on my bike trainer or going for a run most days. At the weekend I noticed that this year I have covered more exercise distance than at any other point in my life. It didn’t feel great to miss out on exercise today, despite being up earlier than usual to get ready for the commute. As I wandered from my house to the train station I was already missing being at home. 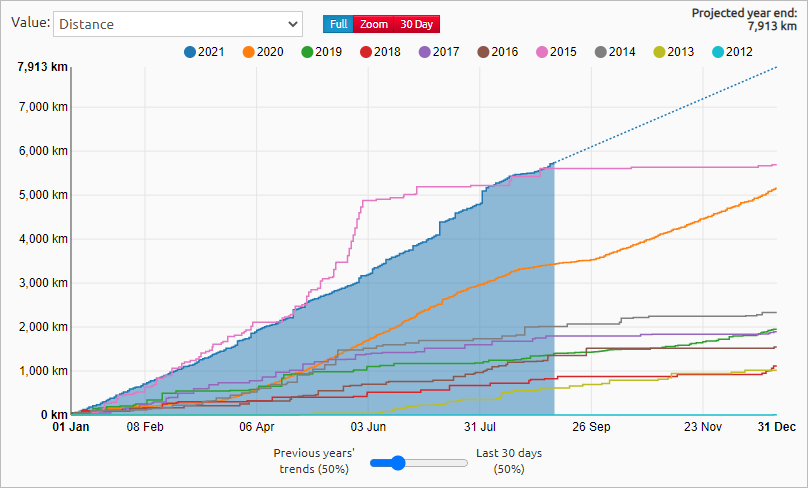 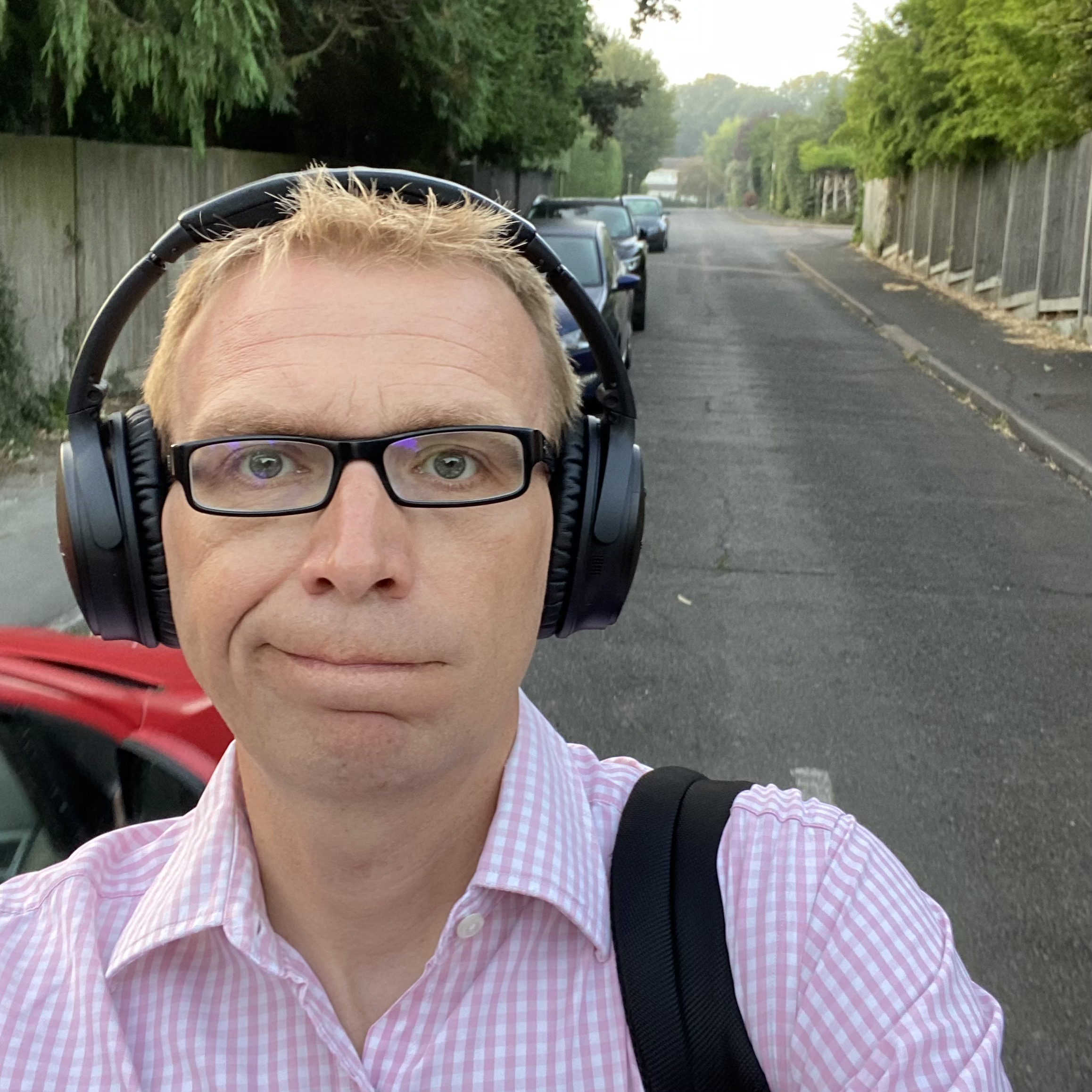 Regretting the journey, five minutes in.

The station was dead. Usually there is a long queue for the ticket machine; I expected this to be longer than usual if people had ditched their season tickets. But there was nobody there. The car park was nearly empty. On the platform, where previously there would have been hundreds of people milling about I counted less than 20. 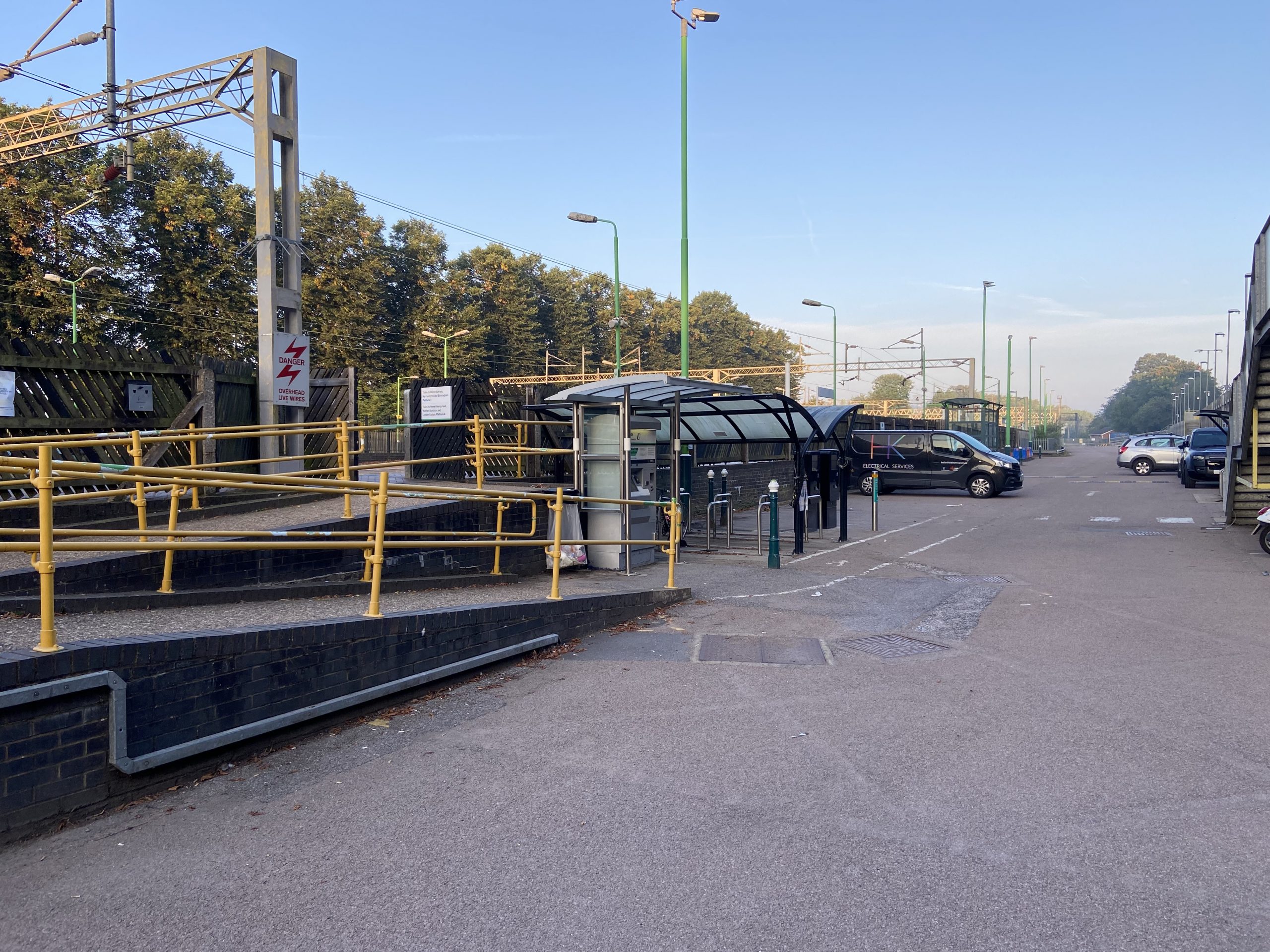 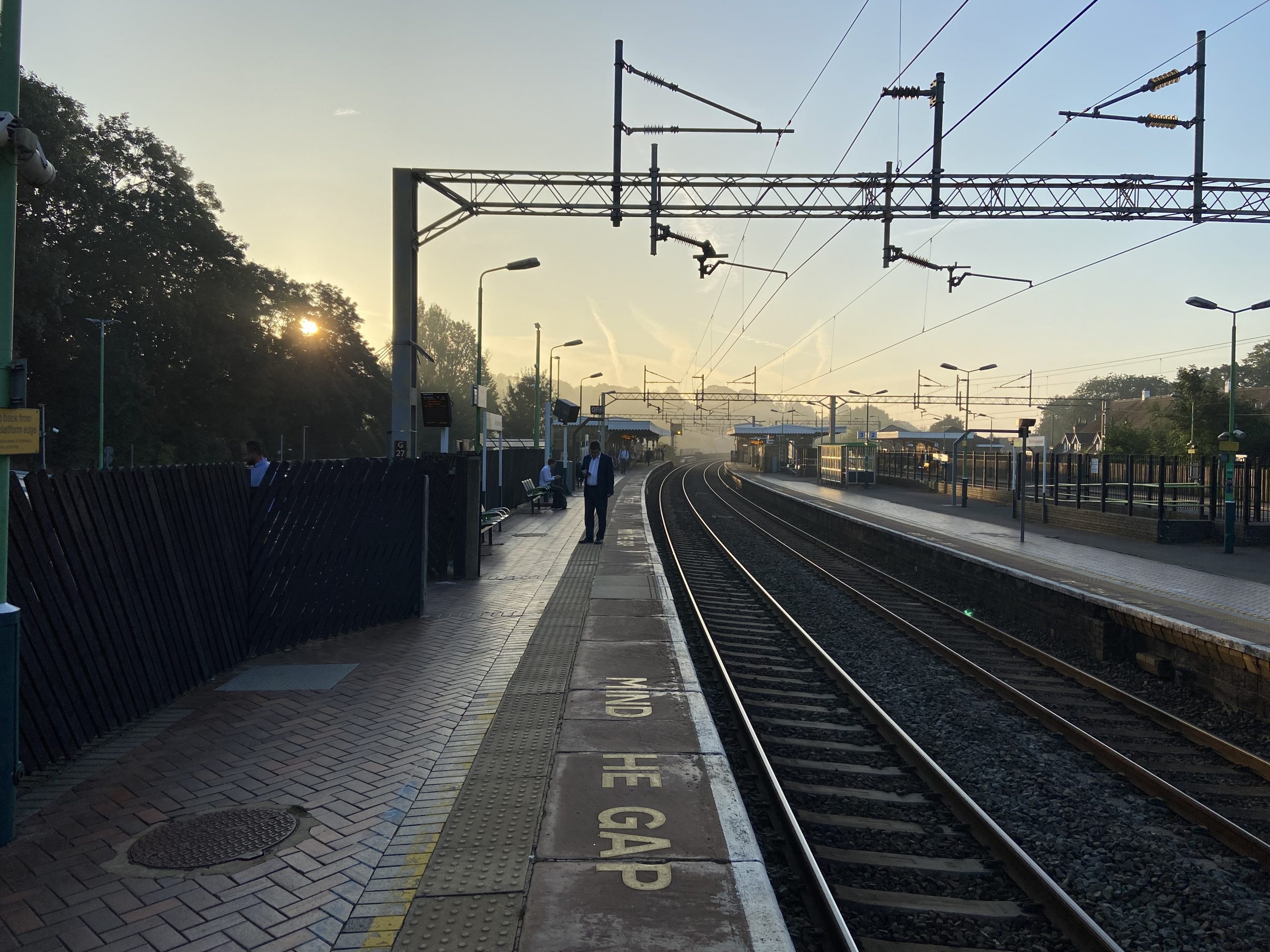 Barely anyone to the left of me… 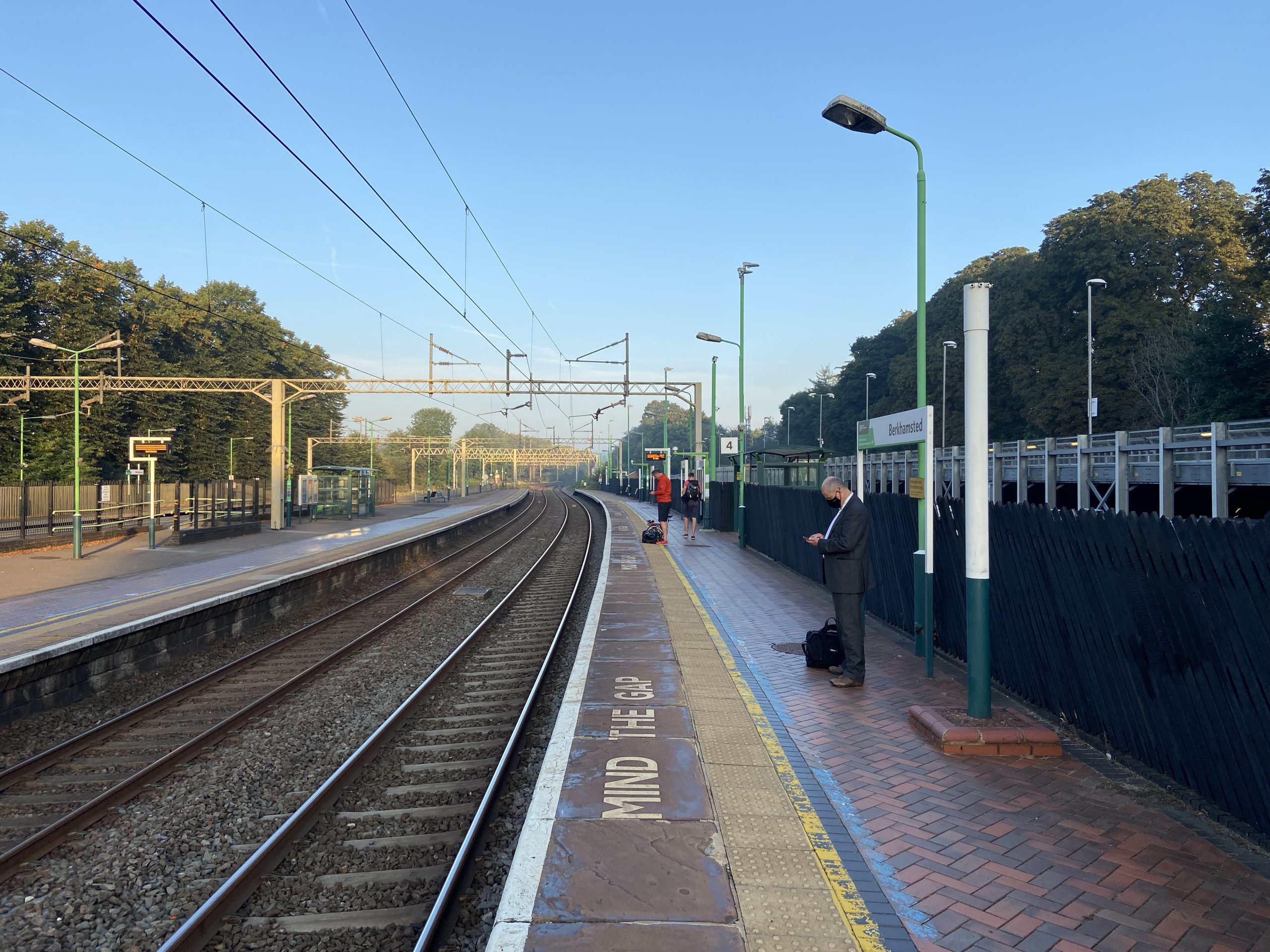 …barely anyone to the right.

I have heard horror stories of people being stuck in COVID carriages where fellow passengers had long since abandoned their masks. Happily, this wasn’t the case on my journey, with about 95% of people that I could see all sporting masks of various shapes and sizes. The train was extremely quiet, and although we picked up what seemed to be quite a few passengers all the way into London Euston, I ended up getting to the end of the journey with a still vacant seat next to me. 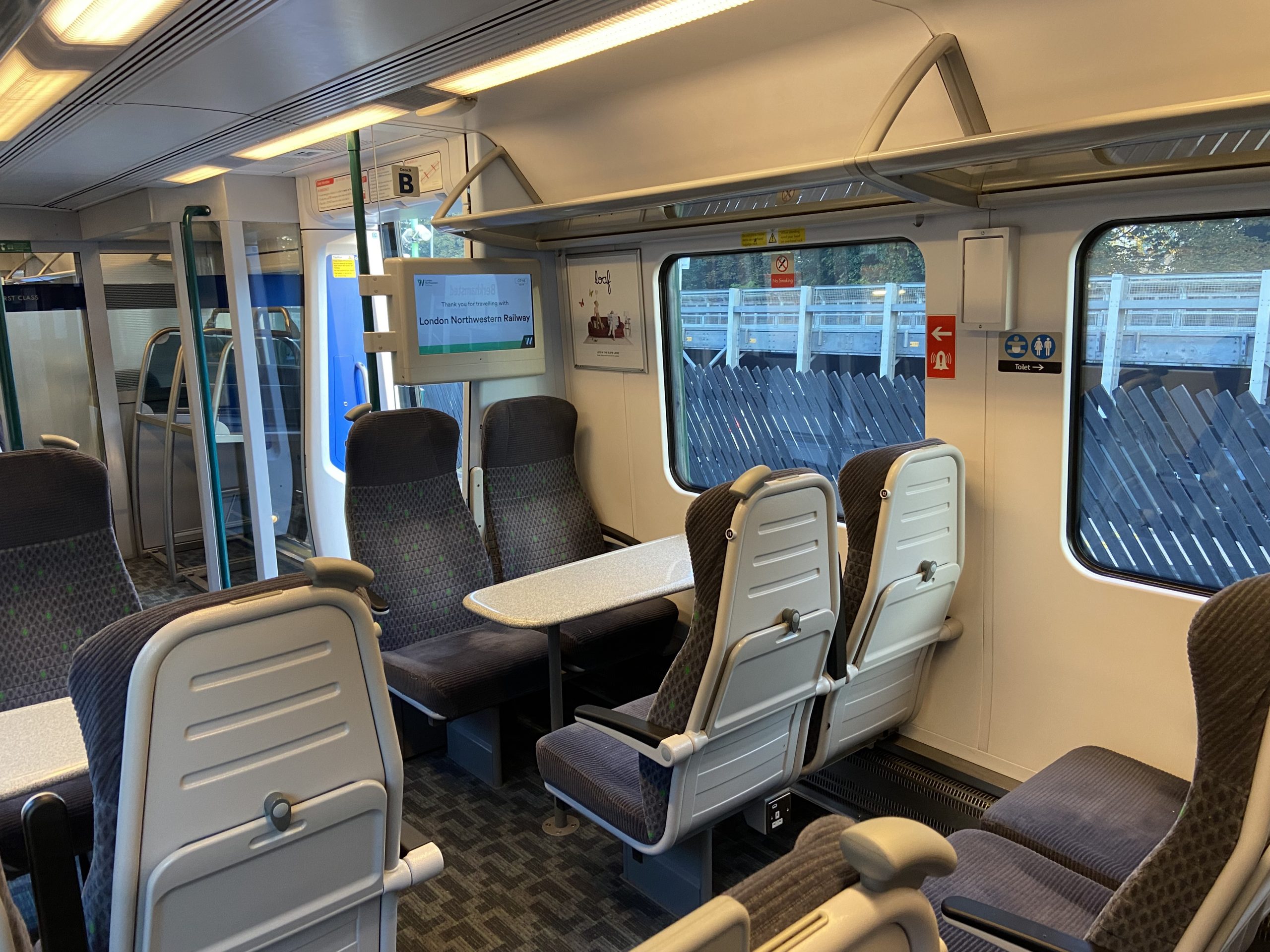 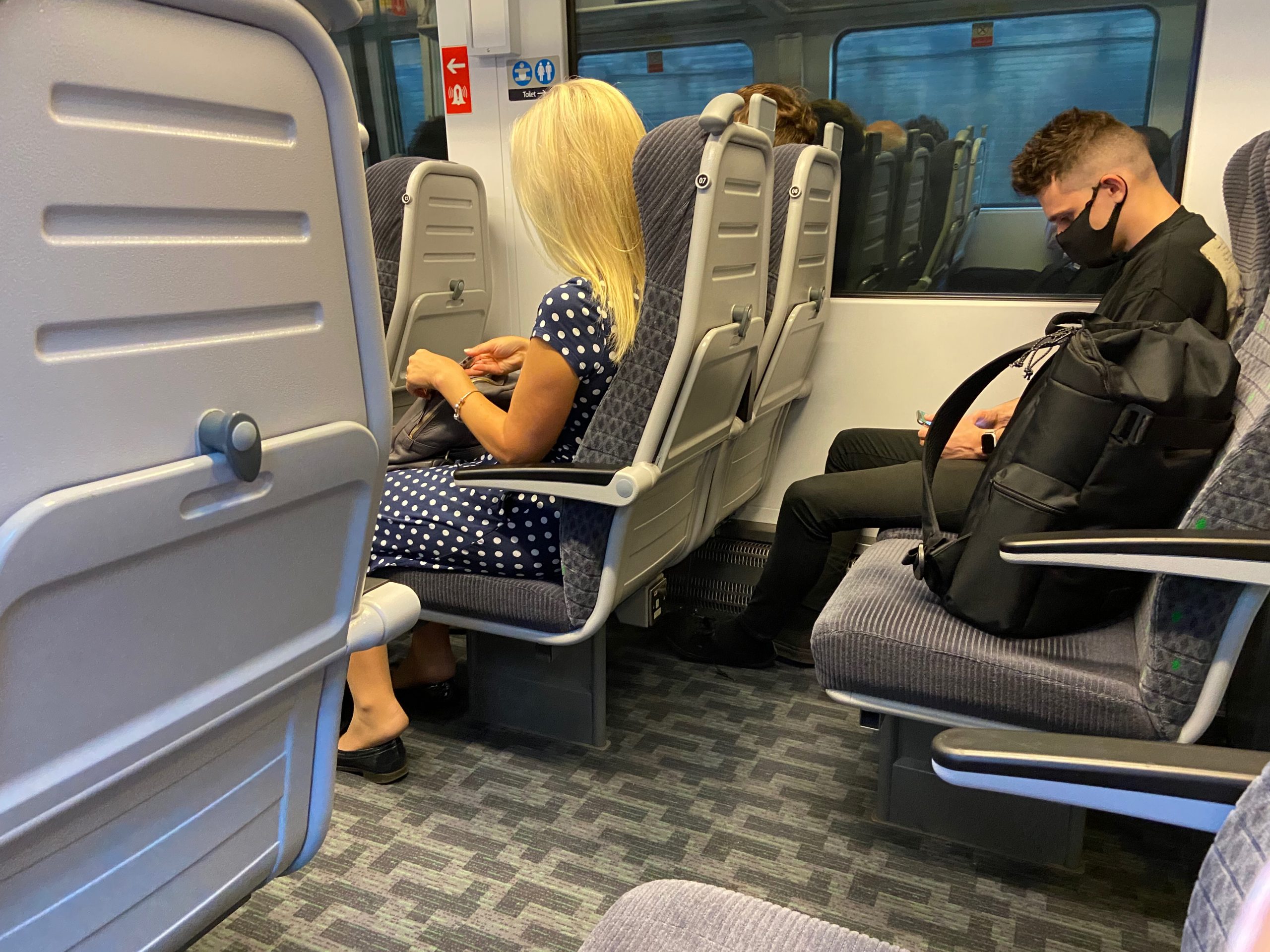 Taken as we pulled into Euston. I wasn’t the only one with a vacant seat next to me.

At the other end, the usually bustling streets of Euston Road were far less busy than usual, and the tube station was quiet too. I almost had to double-check that it was the middle of the week. 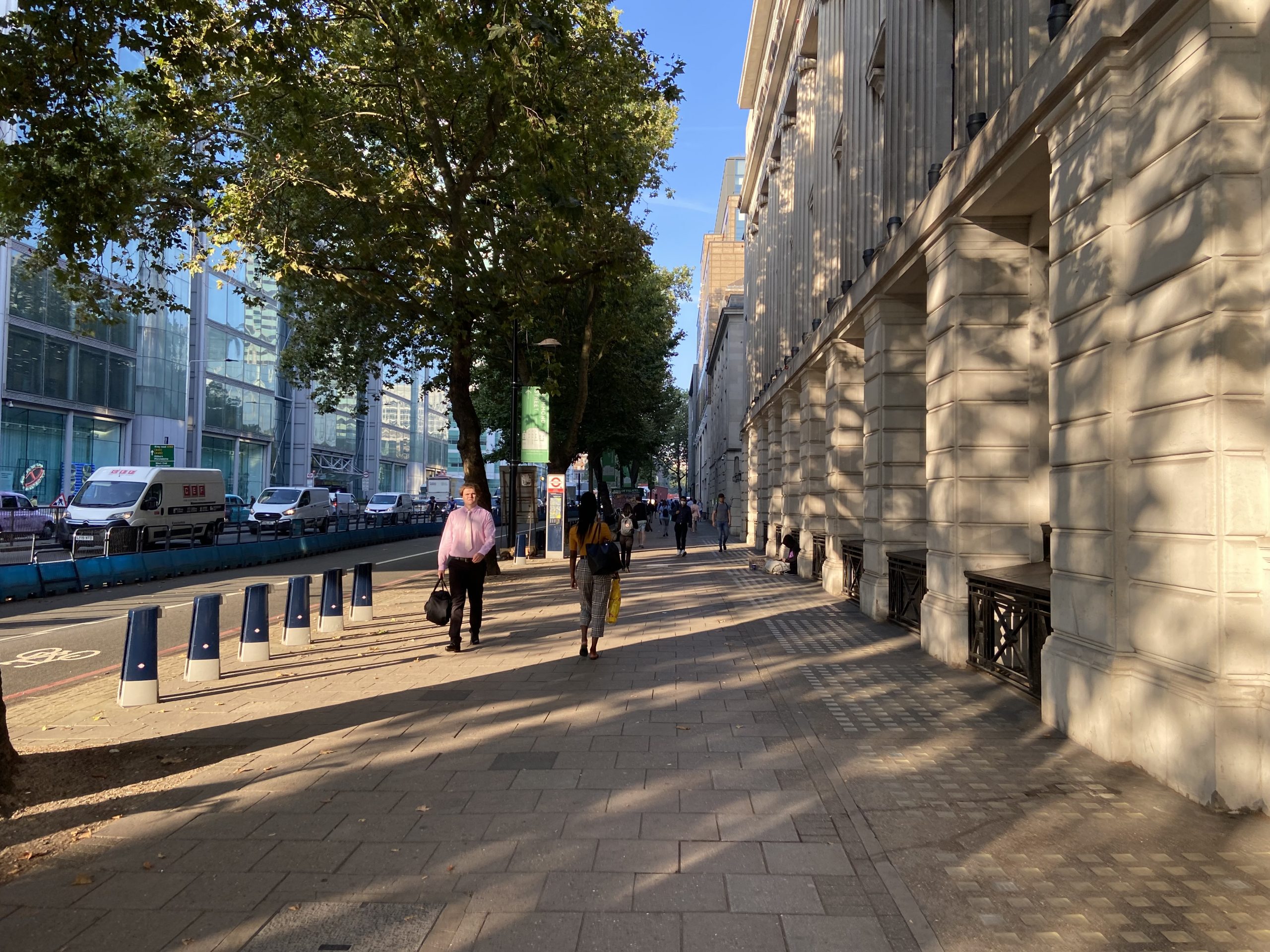 Euston Road, as it usually looks on a Sunday. 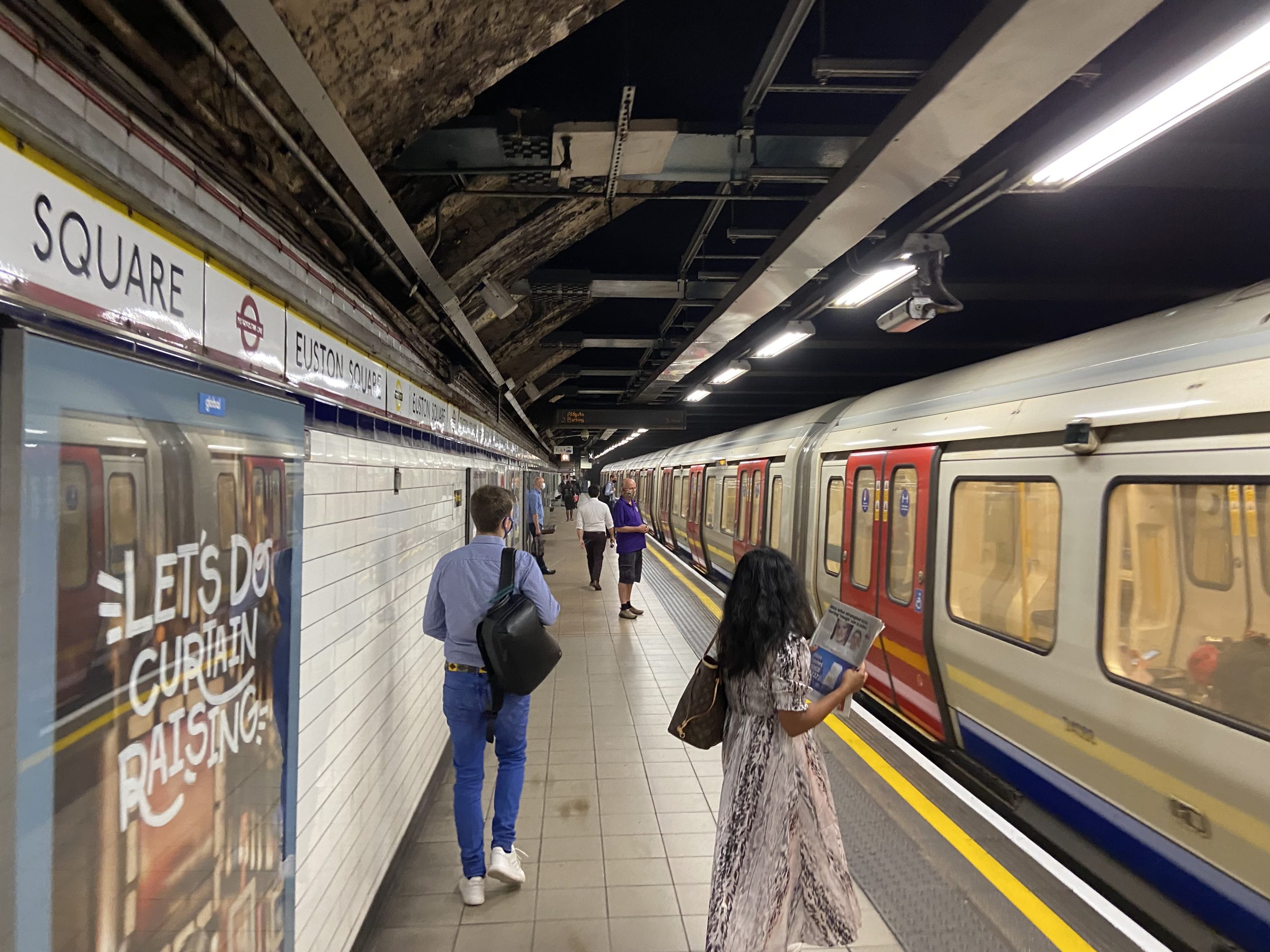 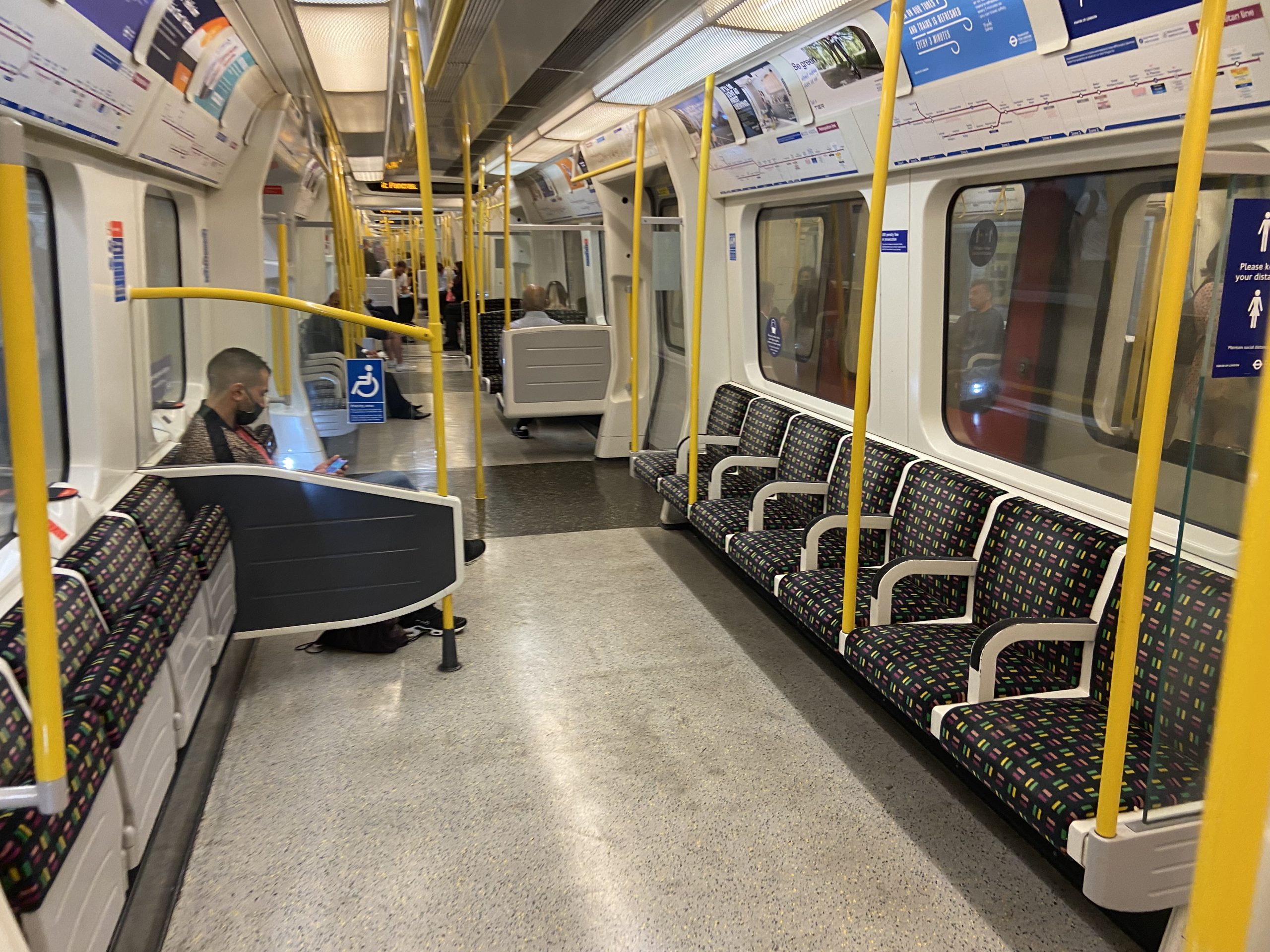 It looked like this up and down the train.

Arriving at Moorgate was discombobulating. The modernisation work on the station had come on significantly, and there is now a shiny new entrance that I had to navigate. It took me a few seconds to get my bearings and point my feet in the direction of the office. 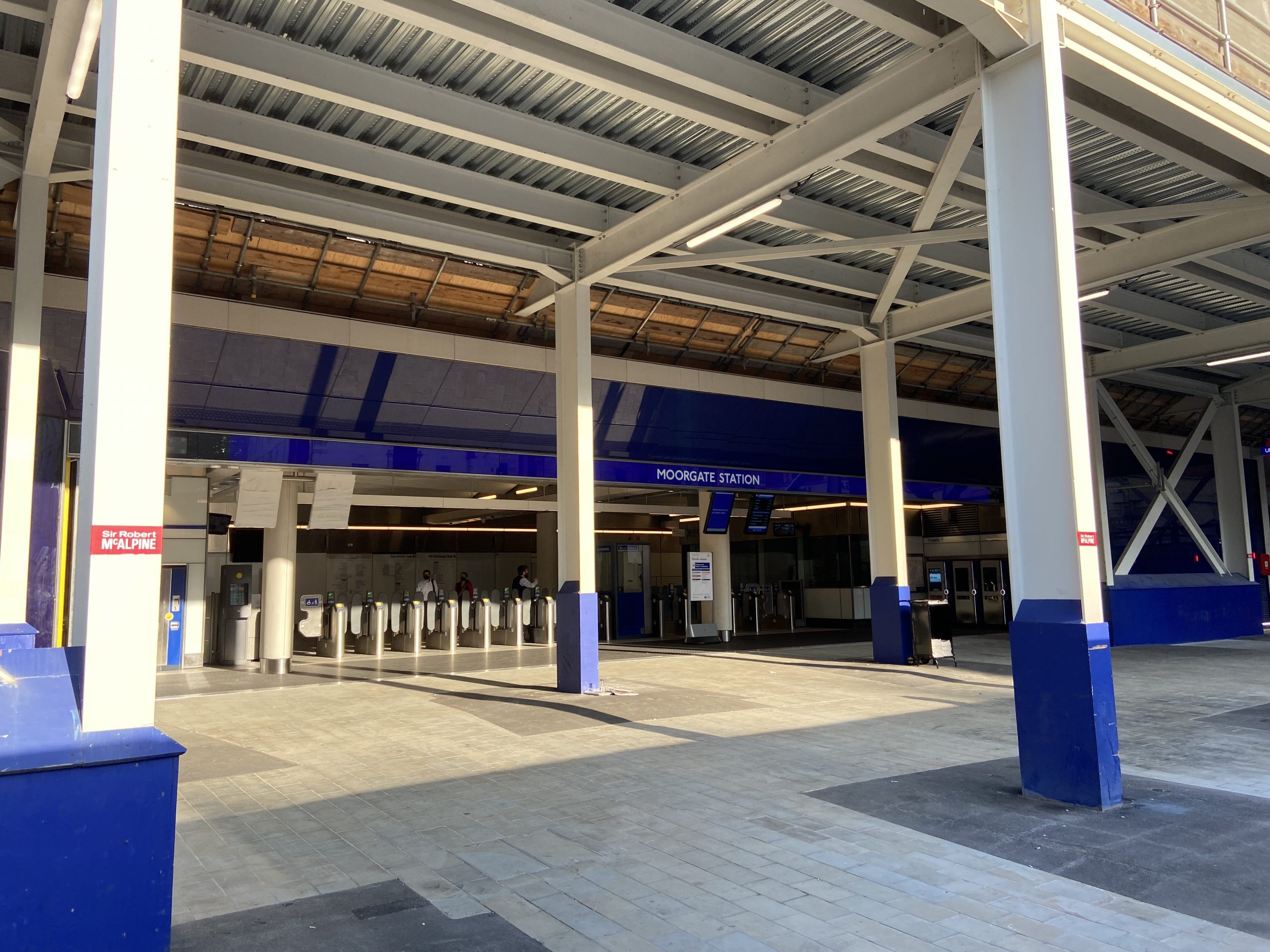 A shiny new Moorgate, emerging from the construction work.

At the office I was greeted by a new layout in the lobby, with plastic screens shielding the receptionists and a large temperature sensor that had to give me the all-clear before I could be let in. My pass didn’t work; I had become a permanent employee during lockdown and needed to get a new card that reflected my change in employment status. After a little bit of admin to validate that I really did still work there, I was given my new key and was let in.

After so long out of the office, it felt strange to be back, but also like I had never been away. Everything was pretty much just as we had left it over five hundred days ago, with only some additional signage to indicate that we had been through (or are still in) a pandemic. 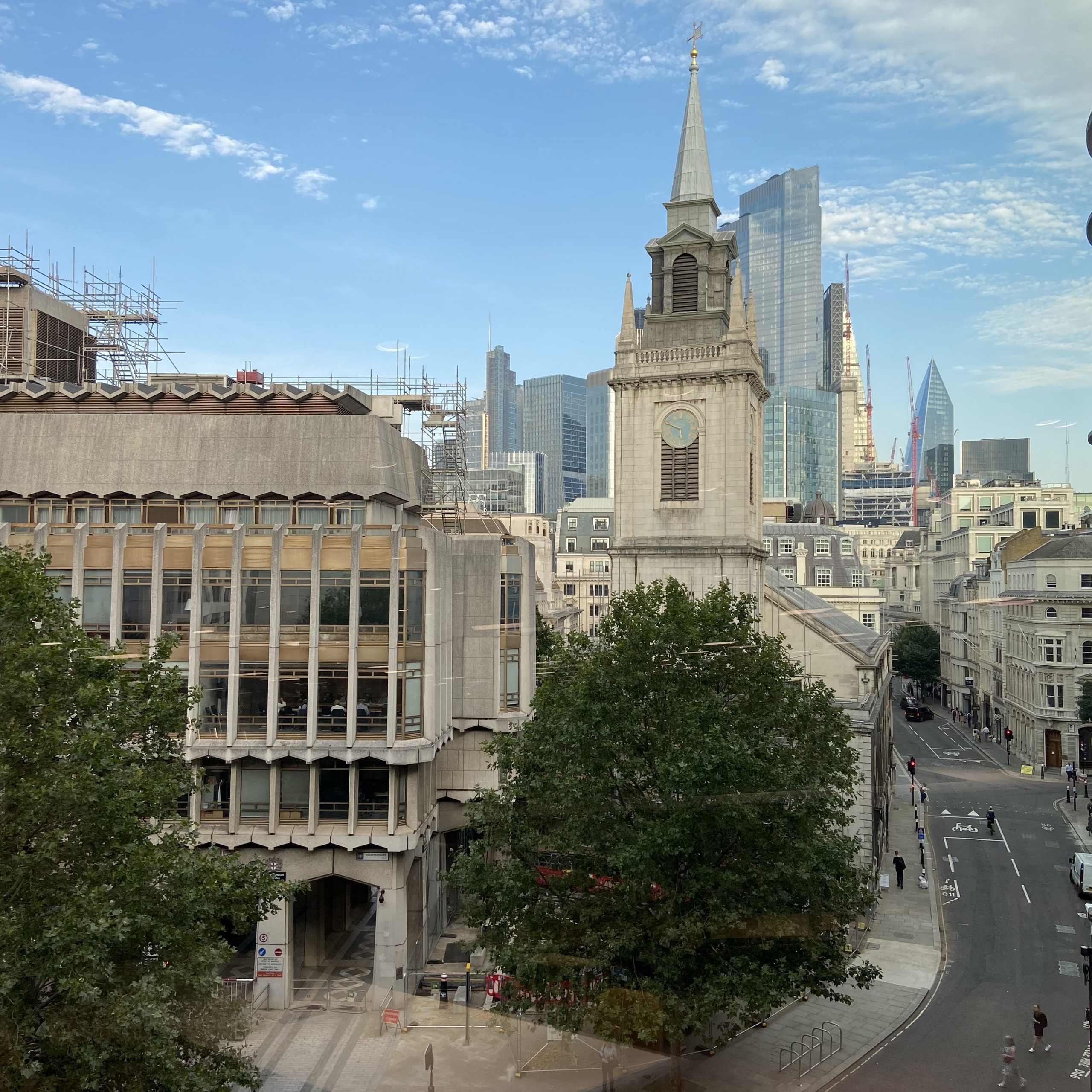 Some of my IT colleagues were in the office, and I found myself listening to a conversation that someone was having with a coworker in Johannesburg. I wandered over to contribute to the discussion, and realised that this is the sort of thing that I had been missing out on. With a handful of us in the office this kind of ‘distraction’ was valuable, but with more of us it could easily get frustrating; I was reminded of times where I had sat at my desk with noise-cancelling headphones covering my ears, playing ambient cafe sounds to drown out the words around me.

One of the perks of going in before everyone else returns is the free food and drink currently on offer. It was brilliant to get a good morning coffee again along with a cooked lunch. I found out that I’d turned up on bean burger and curly fries day — perhaps not the best idea when I’d done less exercise than usual, but I had to have them. I’d missed them. 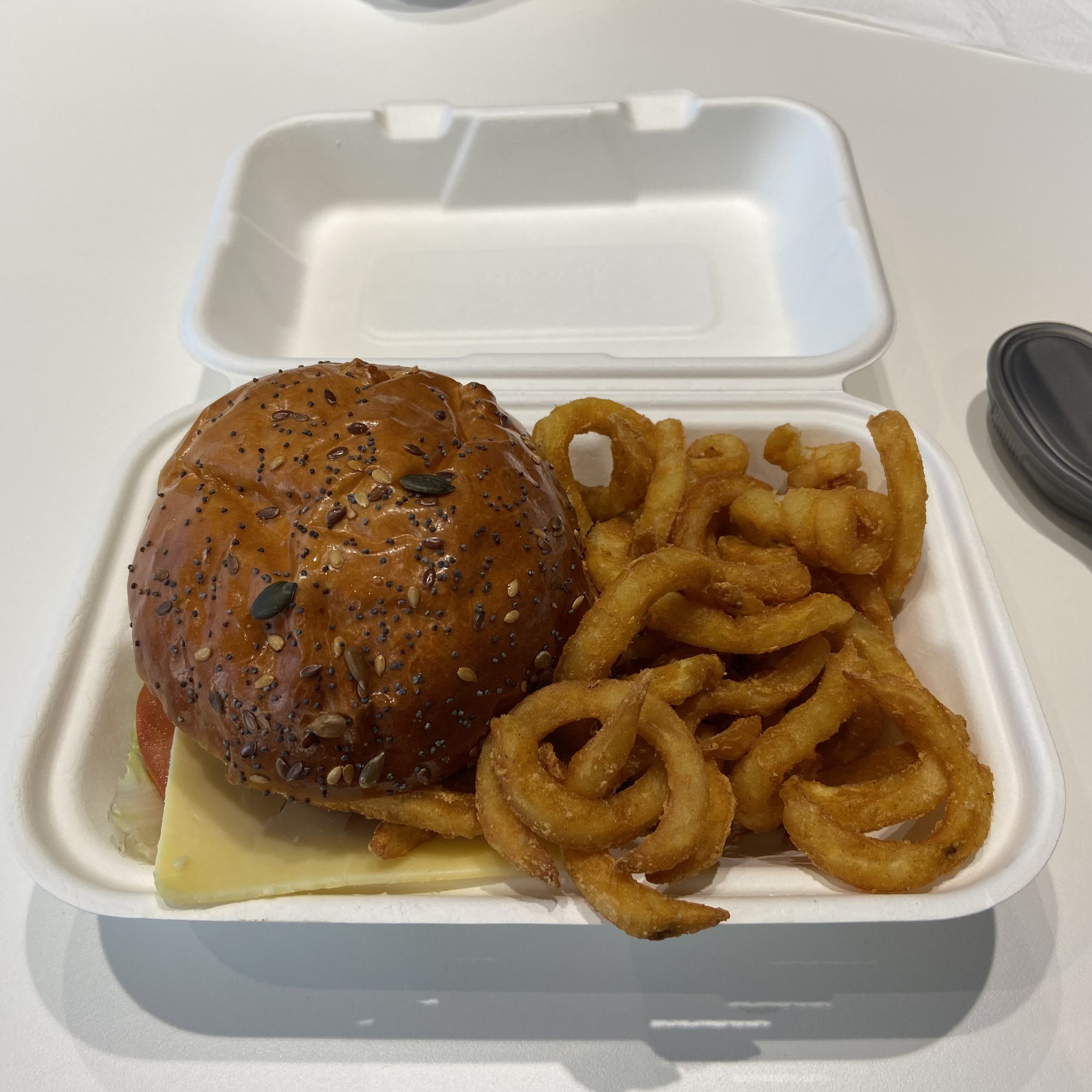 Wednesdays are usually meeting-free but today was unusual in that we had a couple in the diary. We fired up our Surface Hub in our collaboration space and joined a ‘town hall’ discussion with the CEO of our Angola office. It felt good to be sitting there with other people as we watched the session, with everyone else dialling in remotely, particularly as we were passive participants in the meeting. One of our colleagues wanted to ask a question, and it was interesting to see him go back to his desk and dial-in to Teams separately to ask it.

Getting together in the afternoon with a few of my colleagues to talk about the bigger picture of what we are doing was superb. This is the reason to go back. We didn’t solve it all — far from it — but we offloaded a lot of our thoughts to each other and made an excellent start.

I ended the day at around half-six, the last person in the office, and wandered back to Moorgate. Again the tube and train were very quiet, although I did see quite a few more maskless travellers than in the morning.

I think it is going to take some time to get a balance back again. Working from home permanently is definitely not ideal, but I am not sure how much time in the office is the sweet spot, particularly when half of my immediate team are located in other countries. But I’m confident we’ll work it out, and I’m glad I took the first steps back today.