A couple of years ago our Primary School Governing Board came to the realisation that the vast majority of our members were parents of children at the school. While this wasn’t a problem per se — none of us were there to represent the interests of any particular group, nor did we have any issues with governors not ‘being able to take their parent hat off’ — we knew that it was desirable to have a much more diverse group around the table supporting and challenging the school.

Finding governors is not an easy task, typically for one or more of the following reasons:

Typically it has been easier to get parents involved; we can easily communicate with them to explain the role and they naturally want the school to be as successful as possible. Finding people outside of the parent body to join us is much more of a challenge.

Being a school governor effectively gives you board-level experience at an SME, making strategic decisions and asking questions of the Headteacher (CEO) whilst not getting involved in the operational day-to-day running of the ‘business’. My thinking was that the role would offer great experience for someone at a large firm who is on a ‘management fast-track’ scheme as they would be able to bring their skills back into the workplace. One Saturday, I wandered into two of the large supermarkets in our town and asked to speak to the respective managers. One the two was very keen on the idea; he had been a school governor himself, understood the role and had been looking for how his firm could get more involved in the community as part of the group’s outreach work. It seemed like a perfect fit.

A few months passed and we found ourselves with a new school governor, ready to start and keen to get stuck in. Unfortunately our time together was short-lived. Although he had been given time off from work to attend our meetings and other governor functions, he already had a very busy life and soon found that he could not devote the time to the role that it required. We understood — he was not the first person to feel this way after starting — but we were back to square one.

In hindsight, although I think that the idea was sound, people need to come to the role of their own accord and not because they are asked or compelled to by their employer. I don’t have an insight into what was discussed within his firm prior to our governor applying but I suspect that it was floated as an idea and he felt as though he should help out. It’s a bit like where a company has a formal HR-led mentoring scheme where you put your hand up and they pair you up with someone — inevitably this often doesn’t work because the two parties have not come together ‘naturally’ for their own reasons with a clear view of what they both want to get out of it.

One other avenue we explored was using the governor recruitment portals, School Governors One-Stop Shop (known as SGOSS) and Inspiring Governance. I spent some time looking through the latter, reviewing profiles of people that live within a few miles of our town. For some reason we didn’t push this very hard; perhaps after the experience with recruiting someone locally I was concerned that having to travel to our town to attend the meetings would be just one more barrier to success.

What finally worked for us

One night, on a governor training course, I got chatting to a couple of governors from another school about our recruitment challenge. They had been through the same problem and had successfully tackled it by dropping a letter from the Headteacher and Chair of Governors through the letterboxes in the local area. This sounded like a simple but genius idea. There must be lots of people who want to get involved with the community but don’t know that the opportunity exists and this would be a great way of engaging them. I floated the plan with my own Governing Board and we agreed to give it a go.

When a parent vacancy arises and we ask for nominations we normally send out quite a detailed letter with background information, details of the responsibilities and the commitment required. It makes no sense to not be up-front about it. We want to avoid having parents nominating themselves, getting elected (through what inevitably ends up being something of a popularity contest), being trained up and then finding that they can’t or don’t want to do the job. My initial stab at the letter for our door drop was based on this, spread over a couple of pages. Luckily one of our governors helped to chop it right down to something that was short, punchy and would fit on a single side of A4; the strategy was to try and reduce the barrier to someone emailing us or picking up the phone in response. We could slowly reveal more about the role to them later once we had made initial contact, including the amount of work the job entails. A shorter letter is easier to read, much less daunting and saves significantly on the printing cost.

Our letter drop has proved to be a stunning success. In summer 2016 we posted 500 letters which resulted in four or five inquiries and eventually three superb new governors joining us. They have a lot of professional experience — one is a Finance Director at an international hotel chain, another is an Executive Headteacher for a group of schools in a neighbouring county — and they each said that the letter landed just at the right time, when they were already toying with the idea of trying to ‘give something back’ and be more involved in the community. This past summer we printed 1,000 letters which resulted in five people coming forward, four of whom will be joining us initially as associate governors as part of our succession planning. Again, they bring a fantastic diverse range of skills from their professional lives including teaching (one is a professor emeritus at a world-famous university), Human Resources, public speaking and marketing.

After an initial enquiry I met each candidate for an hour or so at a coffee shop in town to get to know them and to find out what they could bring to our board as well as answer general questions about the role, the school, its ethos and our challenges. If this went well we then arranged a meeting with the Headteacher who gave them a tour of the school. If the Headteacher and I were both happy we scheduled a formal interview with our Vice Chair of Governors, followed by reference checks and finally a vote by the Governing Board as to whether they can join us.

1,500 letters sounds like a lot but it doesn’t stretch very far. The map below shows the area that we managed to cover across the two summers, give or take a couple of hundred houses. 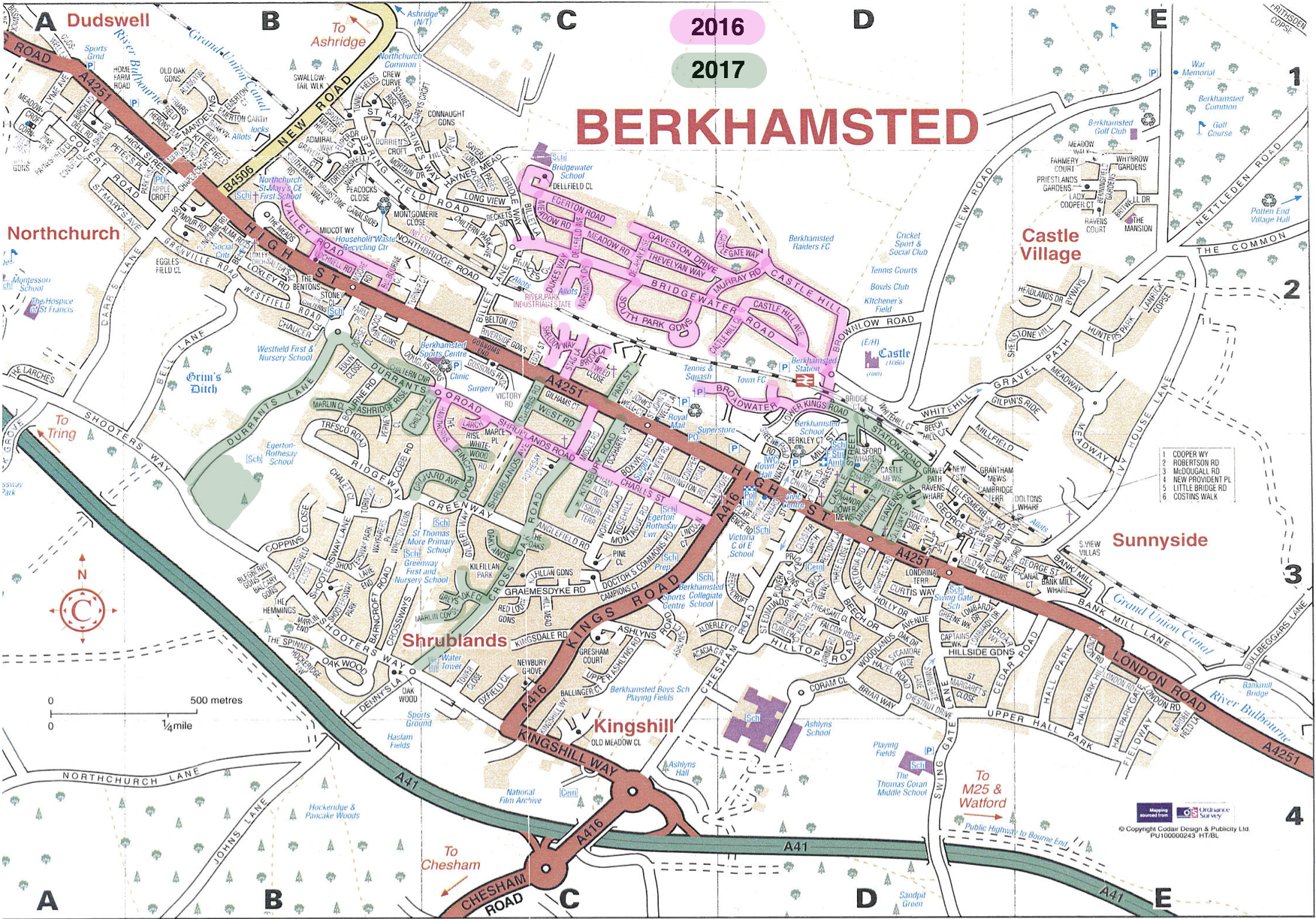 If you are part of a school governing board and are also struggling to find people to be involved, I strongly recommend reaching out to the community this way. The text of our letter is below or you can download it in Word or plain text formats. Before you start, remember to read ’The Right People Around The Table’ which gives you excellent up-to-date guidance on the recruitment process that should be followed from start to finish. Good luck!

Update October 2018: Once you have been approached by potential governors, you may find this post useful for what to do next.

Have you ever considered becoming a school governor?

The Governing Board of [school name] in [town] needs additional governors and would love to attract the skills and experience of people from our community.

School governors are volunteers who work together with the Headteacher to deliver the best education for the pupils at their school. Generally, school governors are not specialists in education. Instead, much of the role is about exercising common sense – and of course working together in the best interests of the children. The governors at [school name] work with the Headteacher on a diverse range of matters – from deciding what kind of school we want [school name] to be and thinking about how we want it to get there, to setting school policies and ensuring money is spent on the right things.

Most important of all, the governors are there to question and challenge the school’s leaders on the standards of educational performance. Ultimately, they work with the school to ensure that pupils receive the best opportunities to learn in an environment in which they feel happy and secure.

The full governing board meets every half term, with separate committees (made up of smaller groups of governors) which meet four or five times a year. Meetings last around two hours and are lively and interactive. Most of our current governors work full time and manage to fit in their role around their other commitments. Their motivation is invariably to make a positive contribution to something of fundamental importance – educating our children.

This is a hugely exciting time to be a governor at [school name]. The school is currently rated [rating] by Ofsted. We recently introduced mindfulness practice throughout the school with very positive feedback from pupils, staff and parents. Later this year will be pleased to welcome a school dog to part of everyday life at the school. [School name] is not standing still and we continue to make many innovative changes.

Governors are unpaid, doing what they do simply to try to make [school name] the best school it can be. In return they gain skills which they may not otherwise acquire, as well as getting a wider perspective on a key part of their community. Most importantly, governors get the satisfaction of knowing they are helping to make a difference in the education of the children who attend [school name].

If you would like to know who the current governors are please have a look at the staff photo board in the main reception area or on the school website at [website address] where you will find their details.  If you would be interested in having an informal chat about the role to find out more about how you can contribute to governance at our school, please email the school with your details at [email address] and we will arrange for our Chair of Governors, [name], to contact you and arrange a time for a conversation.