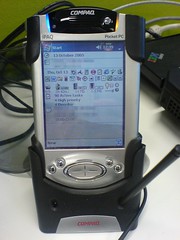 I’ve had my iPaq for a few years now and for most of the time I’ve been disappointed with it. Many moons ago I used to use a Psion 5mx which, although it had a monochrome display, was a fantastic piece of kit – a ‘proper’ keyboard, applications that worked and a slot for AA batteries so that if you ever ran out of power you could just pop to the shop and buy more. The iPaq is colour but it slows down for no reason, used to crash on occasion (until I upgraded the firmware), is in portrait mode (which isn’t so great for reading PDF files) and has a crappy battery life – when the battery goes you actually lose all of the information and have to restore from the last backup! At the time I bought it I thought it was the way forward, with its colour screen, bluetooth connection and the fact that it was supported at work so I could sync all of my business appointments. Syncing things up was never straightforward, however, as I wanted to sync both at home and at work and home computer kept telling me that it had found a new device and wanted to sync everything every time – not great. When my Pocket Outlook started to retain ghost messages that no longer existed and my bluetooth connectivity failed to work with my new phone I kind of gave up on it. I had searched Google far and wide for solutions for both problems but couldn’t find anything.

That was, until I read David Allen’s Getting Things Done book last week. The book is fantastic, but more on that in another post. I wanted to get my iPaq back up and running so that I could get my task lists in order and start to get them done. I made a ‘final push’ on Google and came up with the following two gems…

For the bluetooth fix, I found a forum that contained a link to a bluetooth software that is completely different to the rubbish that got delivered with the PDA. It really is a beautiful thing – there’s no more mystery around what the bluetooth connectivity is doing and what services each of the connected devices offers. If you have a Compaq H3xxx iPaq with bluetooth I suggest you get hold of this now – if it works as well on your PDA as it does on mine you won’t regret the upgrade.

I had looked all over the internal file system on my iPaq to find out where these ‘ghost messages’ were stored but couldn’t find a bean. A bit of research revealed that the Pocket PC stores information like this in a set of internal databases that are squirrelled away in a place that you can’t usually see. So, with help from Sean’s page, I found out what I needed to do. I downloaded a free copy of dbView which allowed me to view the set of hidden databases as well as their contents. I then followed the instructions on Sean’s page as follows:

Hey presto, it works! I’ve now got myself a PDA that is actually useful again – I can do my emails and surf the web using bluetooth. Now, if only someone had a fix for the crappy battery life.