The temperature managed to stay just above freezing on Sunday morning and the roads didn’t seem to be icy, so it was with some zeal that I set out at 8am kitted out in winter gear ready to tackle the 2015 Harp Hilly Hundred.

This ride is one of a series of ‘Reliability Rides’ held throughout the winter. I don’t quite understand what that means but I assume that it alludes to the harsher winter conditions and the possibility that your bike might break down. The Hilly Hundred has been run every year since 1954 and (thankfully) at some point was reduced from its original 100mi length to a more reasonable 100km.

It was a tough ride, taking us through lots of hills in the surrounding area—Bison Hill near Whipsnade, Aston Hill near Wendover, Ivinghoe Beacon and a personal favourite of mine, Durrants Lane in Berkhamsted. I managed to get around whist consuming the contents of two drinks bottles, three energy gels and three energy bars and still had room for a massive plate of sandwiches and a pastry that was laid on at the end of the ride.

Looking at the Strava times for the Harp Hilly Hundred 2015 ‘segment’ my conclusion is—just as I thought—that I’m not very good. I’ve never done much group riding before and every time I try and keep up with a group I end up falling behind and dropping out. As well as physical strength there is a psychological factor to it and I much prefer to go at my own pace. The only time I managed to pass anyone was towards the end when riders were suffering from cramp (and I had to stop to help one of the guys out by giving him a spare energy gel as he was on his last legs!) 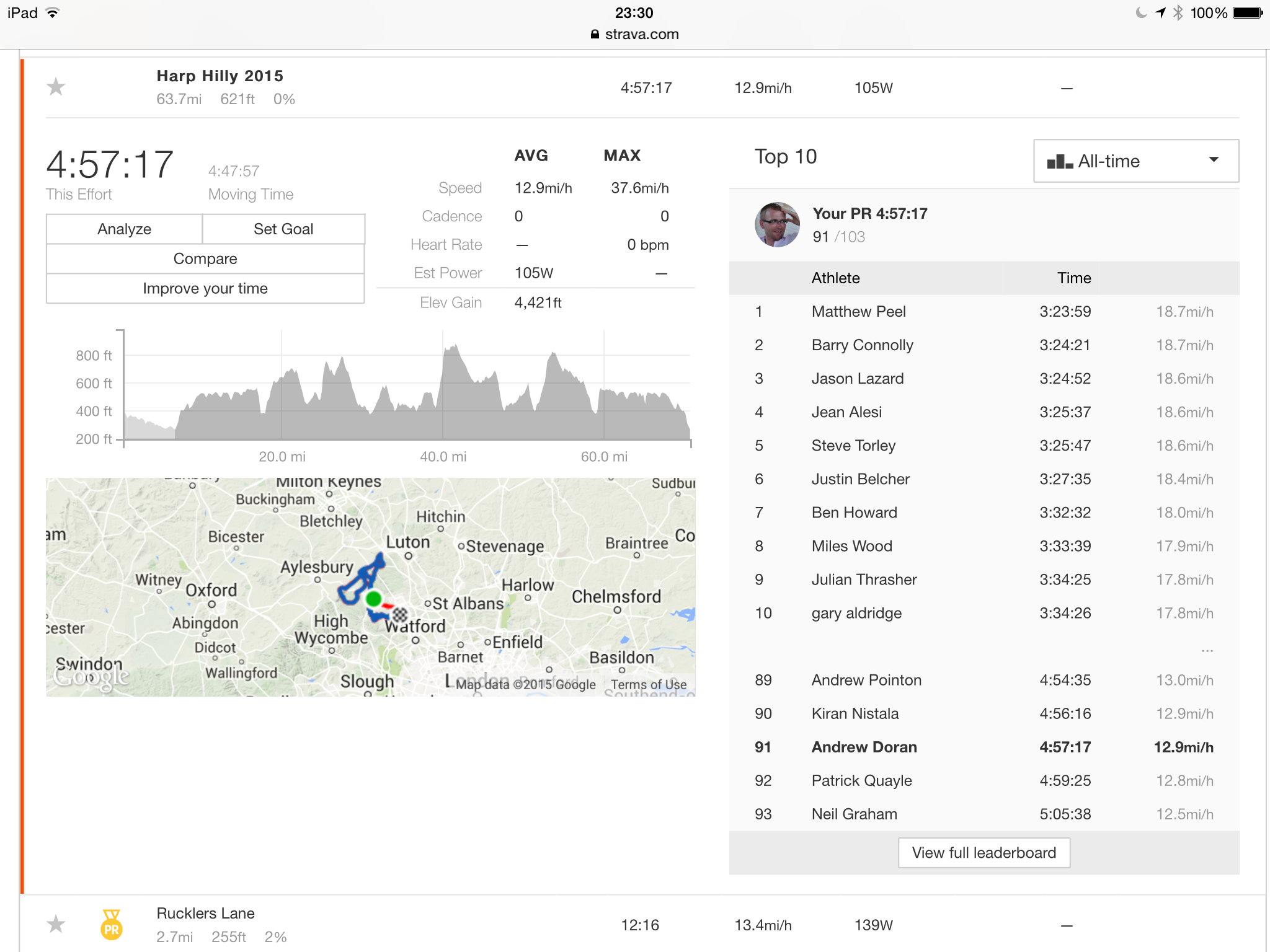 I’m taking my bike for a small service on Friday. As part of that I will be changing the rear cassette from a 12-28 to an 11-30 which should give me both a larger and smaller gear than what I have now, the smaller being something I think I might need for our long climb into the Alps in May. I am also considering changing the chain rings from 46×36 to a 50×34 which is more ‘roadie’ although I am not sure how much difference this will make to my speed. Any advice gratefully received!

A few years ago on a very cold morning I went for a pootle on my old mountain bike. Halfway around my route I strayed too close to where the road asphalt met the grass, hit a patch of ice and went down hard onto the floor. It all happened in a split second and was scary because I ended up in the middle of the road. I was so grateful that there were no cars around.

Along with a few cuts and a bang to my helmet I did something to my backside—it never showed any signs of bruising but hurt on the right cheek for about six months.

Since then I’ve decided that going out in freezing conditions is not worth the risk. I don’t mind the cold—you soon warm up when you’re moving—but I don’t want to risk a broken bone or something worse.

The pic below shows that riding is out of the picture today so more turbo sessions await me. 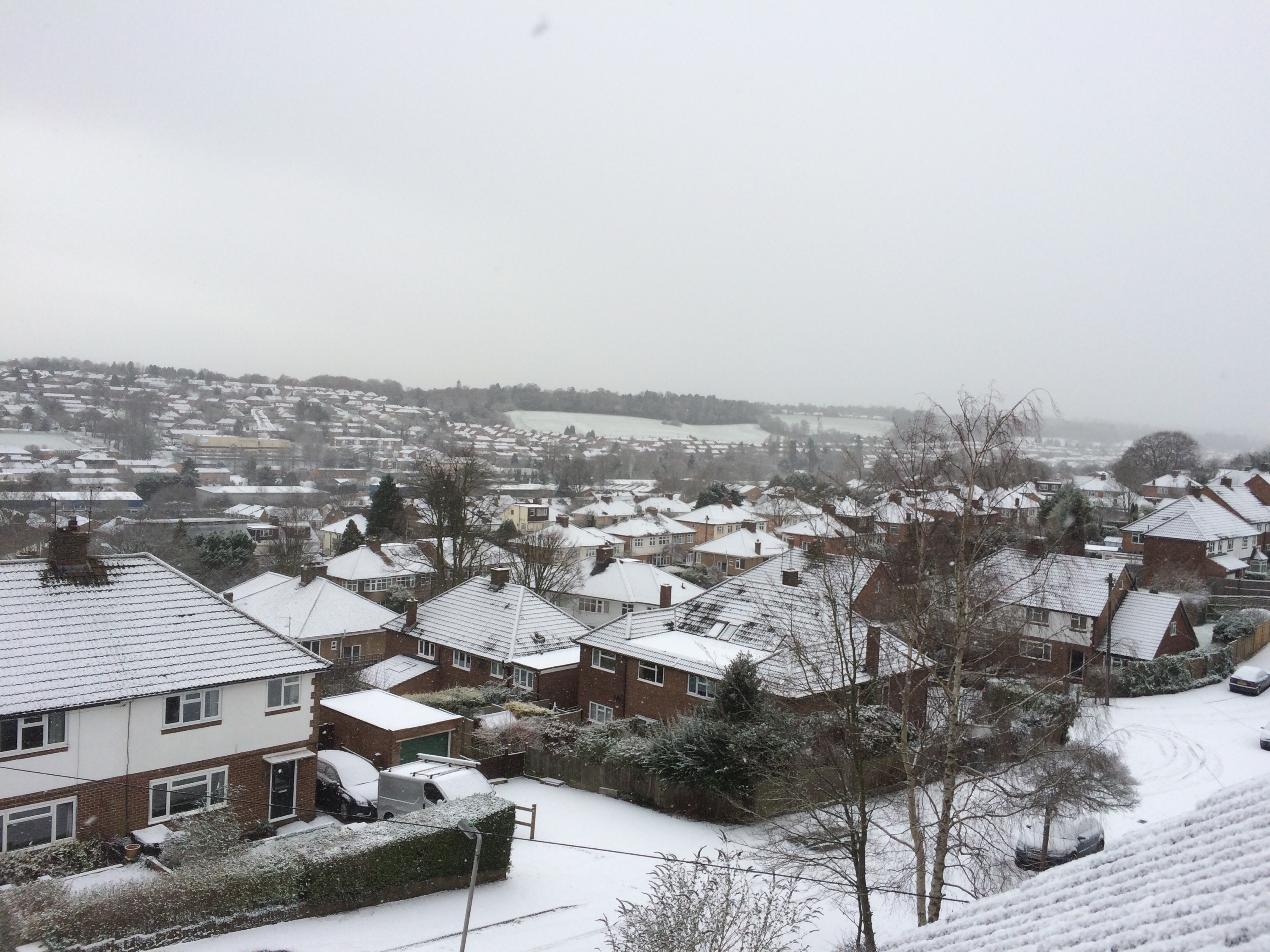 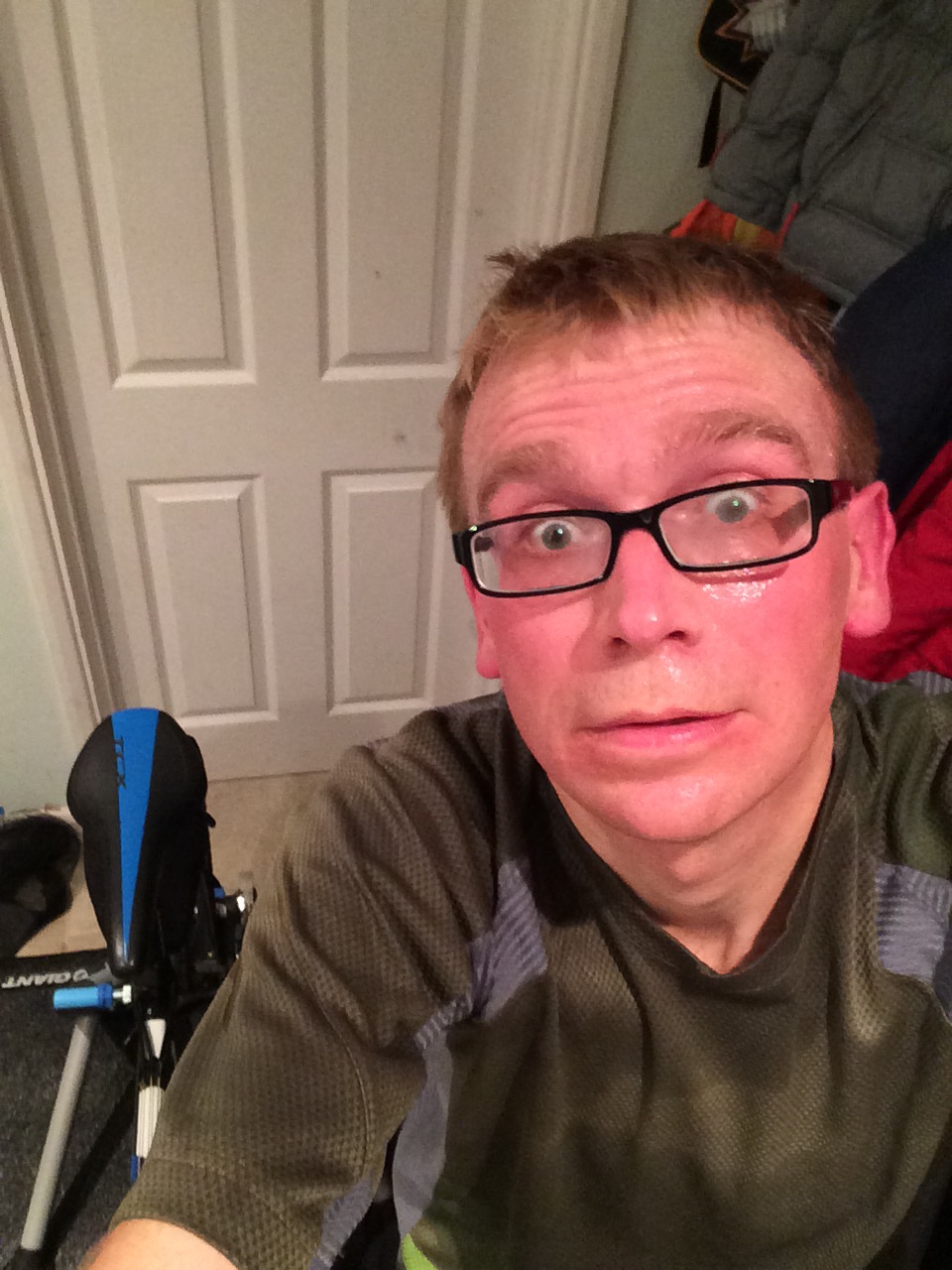 As I said in my last post, when I signed up to Ride 999 I assumed that the big challenges would be achieving the sponsorship goals and getting enough miles on the bike to be fit enough for the ride. What I didn’t factor in whatsoever was the amount of bike maintenance that will be required in the run up to the event.

I’ve ridden just over 2,000 miles since I bought my bike 18 months ago. The London Revolution and Ride 999 add up to a total of approximately 1,100 miles in the space of just over two weeks. Between now and the start of the London Revolution there are about 17 weeks. If (and it’s a bit of a big ‘if’!) I can stick to the advice and try to be doing 100 miles a week in training now or very soon, ramping up to 200 closer to the event this will add up to 2,000 miles in training alone. That’s a daunting amount of miles and will take its toll on the bike.

@riderstuart has been very kind in giving me a list of things I need to plan for. I’ve also added a few of my own. They are:

If (and only if) I can get the advised miles in I will need to replace some of the components twice between now and the event. None of this was budgeted for when I signed up so I am going to have to do some shopping around and take some advice as to what will fit my bike, be reliable and safe but also relatively cheap!

Lovelo can expect a visit from me very soon…

Since I signed up to Ride 999 I’ve had an anxiousness in my stomach that I haven’t been able to shake. It kept me up most of the night after I hit ‘join’ and hasn’t really gone away. I think it’s down to three things:

Number 1 is done-and-dusted and not worth worrying about. Number 2 is where my friends, family and the Internet comes in. The only one I can do anything about is Number 3. So, in that spirit, training starts here.

I have two young boys of 7 and 5 years of age and like most families like us we have lots of weekend commitments. I am going to try and keep as many of them as I can whilst doing as many miles as I can. So, at 8am I’m going out in this to cycle a long route over to my eldest son’s football match:

UPDATE: Although the ride was cold, I soon warmed up. The 25 miles out to football felt great. I had a protein bar, watched 40 minutes of football and got chilly. The 15 miles back were a real slog—my thighs were burning and I was slow and hungry. Clearly I have a lot of work to do.