Finished watching The Beatles: Get Back. What a treat! It was well worth the wait. 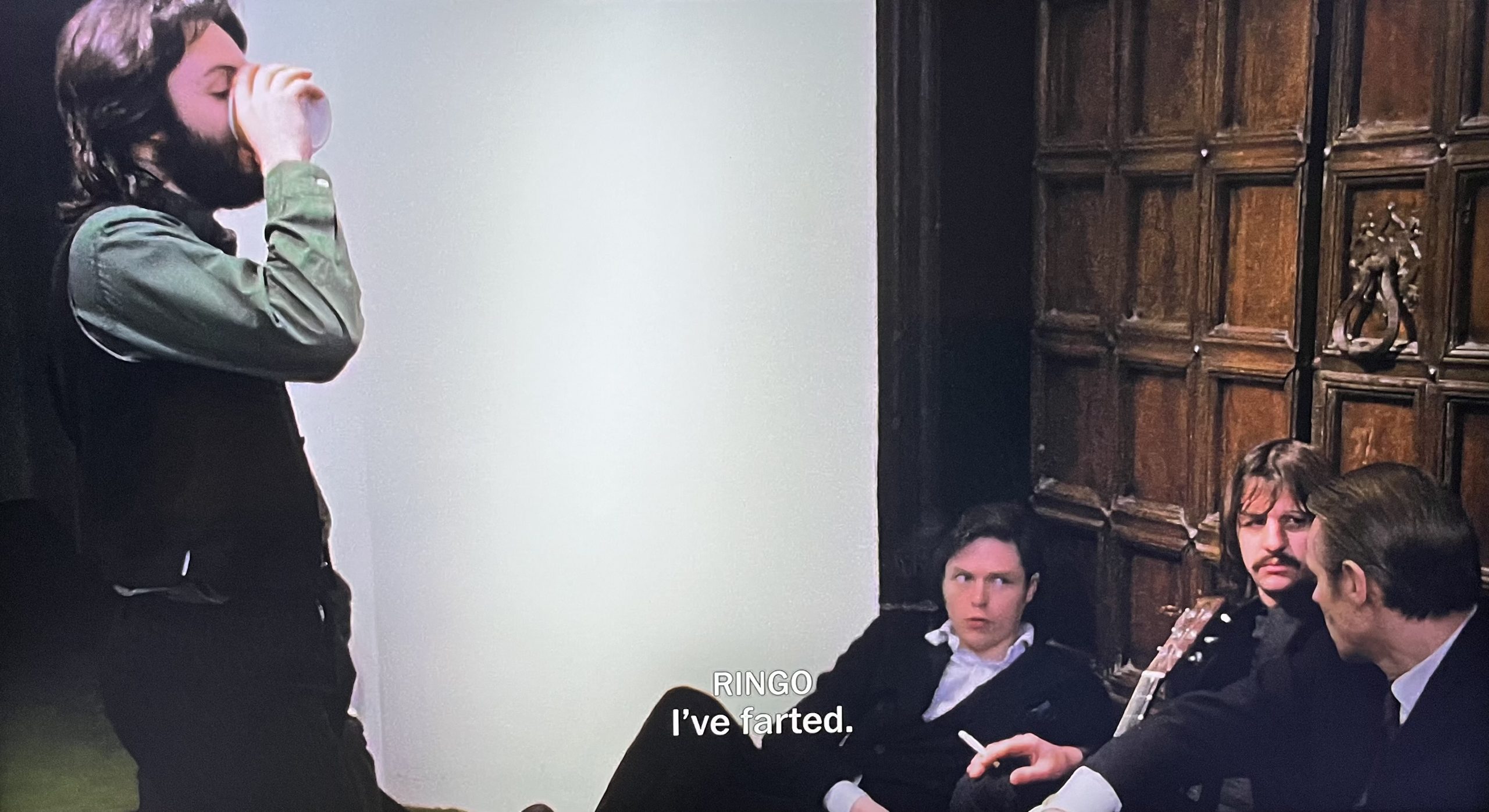 This is how history is made.

The Beatles have always been part of my life. My awareness as a child moved to obsession as a teenager in the early 1990s. I listened to as much of their recordings and hoovered up as much information as I could, reading books such as The Ultimate Beatles Encyclopedia from cover to cover. My obsession has waned but my interest is still alive; I continue to pick up the odd Beatles-related book or movie every now and again.

I’ve never seen the original Let It Be movie from 1969. It was always out of print and unavailable to buy. But the recording sessions were infamous. I’d read and heard so much about them I felt like I knew the story. It turns out that I did, but there is so much more colour to the narrative than I was expecting.

The three episode format, each one longer than many films, seems like an odd choice at first but makes sense upon watching them. Each one covers a period of about a week or so. The first is based on the sessions at Twickenham Studios, the second when they move into Apple Studio in Savile Row and the third covers the concert on the roof of the Apple office. Eight hours seems like a long running time but it didn’t feel that way. Usually when I watch a music documentary I am always clamouring for the ‘super deluxe director’s cut extended redux’ edition and feel a bit short-changed, but not this time. Jackson has judged the running time superbly, having edited it down from approximately 140 hours of audio and 55 hours of video. The edits are superb; you can spot the audio-only segments as they are cut away from the person talking but it isn’t distracting. The first episode seems to run at breakneck speed as different snippets of songs appear before we quickly move onto the next one.

Jackson has thoughtfully added visual context to the films, interspersing the footage with brief interludes to explain things such as the incredible-looking venue in Tripoli that Michael Lindsay-Hogg was trying to persuade them to play at, and exactly who Enoch Powell was.

The most incredible scene comes in the first episode where McCartney and Starr are waiting for the others to arrive. McCartney is noodling a riff on the bass guitar and suddenly the basic shape of Get Back, the song, emerges. It is absolutely extraordinary to watch; the audio equivalent of seeing someone take a piece of clay or a blank canvas and create something amazing, new and unique.

Harrison seems to be particularly productive, staying up late and writing new songs such as I Me Mine which he demos to the others in an almost finished form. Through the first episode I can see why Harrison gets annoyed and ends up walking out. The full attention McCartney gives to Lennon is totally different to the poor-quality attention he gives to Harrison. It seems so passive-aggressive and I’m not sure McCartney was even aware of it. I have to remember that he was only 26 at the time. At one point McCartney disparagingly refers to a Harrison tune as “one of his ‘last night’ songs”. They touch on gems such as All Things Must Pass but never come back to them again. The others didn’t recognise the wonderful treasures he was bringing to the table.

The story of The Beatles being Lennon’s band at the start and McCartney’s at the end is well-known. Lennon had already started taking heroin at this point and seemed content to let someone else be the driving force. Towards the end of the first episode, McCartney is talking to the room, saying how they need to have more structure to the work that they are doing and Lennon sits next to him playing seemingly hungover or stoned word-games. I think McCartney comes across well here, showing incredible patience.

As we move to Apple Studio in episode two it struck me at how expensive the whole adventure must have been. The Beatles’ first album, Please Please Me was recorded in a single day. The contrast with the Let It Be sessions couldn’t be more stark; seemingly endless recording with no proper numbered ‘takes’ to speak of and a vast number of people milling around the studio. They seem happy to bumble along, singing silly versions of their songs as they record that they know will never make the final cut.

The second magical air-punch-worthy moment takes place in episode two when Billy Preston arrives. He instantly delivers the secret sauce on the electric piano. The riffs are recognisable in the final versions of the songs that you hear on the Let It Be album and the whole room seems to lift just from him being there. I’ve heard snippets of his work before, such as the live version of That’s The Way God Planned It at the Concert for Bangladesh, but I need to give his studio albums a listen.

In episode three we get to see the ‘takes’ that ended up on the Let It Be album, helpfully annotated on-screen. Throughout the series there are snippets of conversation that ended up on the record, such as “‘I Dig A Pygmy’, by Charles Hawtree and the Deaf Aids; phase one in which Doris gets her oats!” and “That was ‘Can You Dig It?’ by Georgie Wood. And now we’d like to do ‘Hark The Angels Come’.” It’s strange to hear these out of context without the music kicking in straight afterwards. Whatever you think of the lush ‘wall of sound’ strings that he applied to some of the tracks, Phil Spector did an incredible job to create a now much-loved album out of what he had.

In the same episode we also see Starr playing Octopus’s Garden. You can see from the film how much Harrison contributed to developing the song. I assume it was de-prioritised in favour of the Lennon and McCartney numbers, only to reappear later that year on Abbey Road.

The final scenes featuring the rooftop concert are well worth the wait. They blew me away. All of a sudden, the band that had spent endless hours noodling and clowning around in the studio look like a proper group again. Their run-throughs of the songs are electrifying, even when John fluffs some of his lyrics in Don’t Let Me Down. It was amazing how much of the album was derived from the rooftop concert, given that it is outside and they only have late 1960s technology to capture it. Jackson does an incredible job to intersperse the live music with everything else that was going on — people being interviewed in the street about what they were hearing, and the police being held off for as long as possible. The simultaneous multi-camera shots add to the excitement.

I absolutely loved this series. It is perfect — I don’t think I could have asked for more. The years of work that were poured into making this series have paid off in a massive way and I am so glad that it exists. What a wonderful thing.