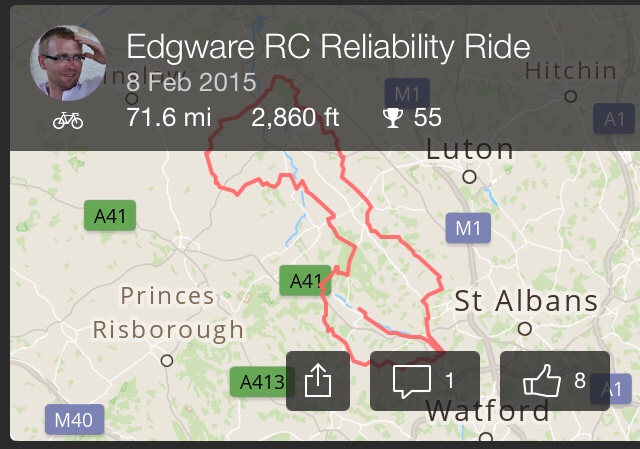 Last Sunday I took part in the Edgware RC Reliability Ride, another 100km (63mi) winter sportive in the Chiltern Classics series. Having spent the previous weekend working and having a couple of very difficult turbo sessions I was keen to get out on the road again. I wasn't disappointed.

I've been using the turbo quite a lot recently with a rear tyre that has been on the bike since I bought it in 2013 so I figured it would be a wise investment to replace it before another long ride. I have a feeling that my previous rear tyre started to puncture after a few turbo sessions and it may have been because the rubber became fragile after getting too hot. I have a recently-purchased Schwalbe Sammy Slick 35c on the front so I thought I would try a Continental Cyclocross Speed 35c on the back; I'm sticking with cyclocross tyres for now until it warms up a bit. They have more rolling resistance than road tyres which I figure will be bad for my speed but good for building up my leg muscles.

The ride itself started in much the same way as the Harp Hilly Hundred although it seemed as though there were nowhere near as many riders at registration—riders from the Berkhamsted Cycle Club were noticeably absent given that so many of them had participated in the HHH. I had got there quite early and decided to head out 30 minutes before everyone else, figuring that if I made an early start I would reduce the chances of being the last one back!

The day itself was glorious, starting out cold and a little icy in places but soon warming up to a balmy 6-7°C. The route was also excellent—nowhere near as many hills as the HHH but some fantastic long straights that stretched as far as the eye could see.

I made good progress and had loaded myself up with energy gels and bars which I consumed at a regular pace. On a few occasions I was wondering whether the route had changed from the one I had loaded onto my Garmin as I didn't see any riders behind me. Eventually I was caught by the leaders after 70km as I rode up towards Ivinghoe Beacon which I think was pretty good going. I ended up completing the ride in just over four hours and was pleased to find my average speed over 15mph—I don't remember having ever achieved that over a long ride before so I'm hoping the training is paying off.

The next one I'm taking part in is the CC Luton 100km on 22 February which should be good as we will be on quite a few roads I have never ridden before. Can't wait.