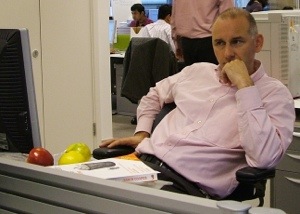 It was incredibly sad to learn on Friday evening that Gerard Venes had passed away after being ill for the past few months. I worked directly for Gerard for a number of years in Human Resources IT at UBS and have very happy memories of those times. This picture is typical of how I remember him, deep in thought about one of the many issues we encountered on the big project we worked on together.

As well as the intense amount of hard work that we got through over the course of those few years I also remember spending time talking and debating all kinds of things with Gerard and the other guys we worked with, whether religion, gardening (I had just found myself in possession of my first garden and Gerard was an incredibly enthusiastic gardener) or London winning its Olympic bid. He took the conversations very seriously and they were always enjoyable because of it.

I learned a lot from working for Gerard. He really pushed me to be as successful as I could be in my role and always gave me food for thought in terms of my approach to my job. He supported me and took his role as my line manager seriously, spending a lot of time making sure I had an annual review that I could use to better myself, pointing out things that I could improve on and ensuring my achievements were recognised.

In January I dropped a note to Gerard to see how things were going and didn’t think much about the fact that I didn’t get a reply. I hadn’t heard that he had been ill until I received a note from a friend out of the blue on Friday. It’s such a shame that I won’t be able to talk to him again, even more so that he was only 49 and won’t be able to grow old with his wife or see his three children grow up. He was a lovely man who will be missed.